What Would Byron Have Said? 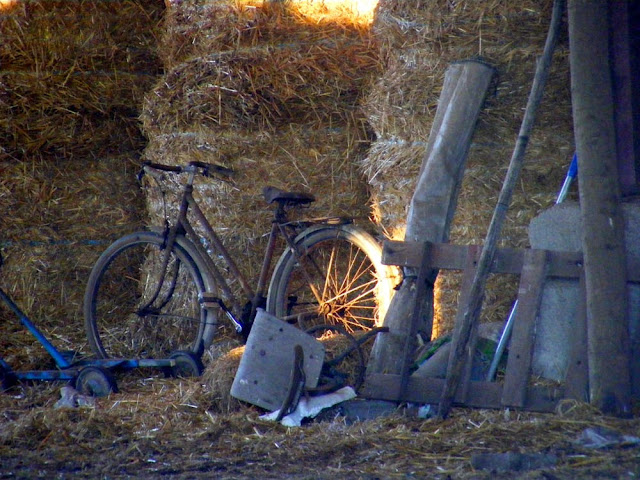 A better photographer than me would not have treated this as a snapshot. They would have waited until the shaft of sunlight was in exactly the right spot to create visual drama. They would have cropped it so that the pile of old junk that surrounds it looked intriguing. They would have taken several shots from several angles and chosen the best.

I did none of these things because they seemed so cliched, and because it's not the sort of thing I normally bother to photograph. I happened upon this scene when mooching about the backblocks of a nearby village. It's the sort of shot, properly dressed up, that appears in countless picture books extolling a bucolic wonderland of peace and contentment. I can appreciate a well presented photo for its design qualities -- lines, colours, proportion and so on. What I don't have an eye for is what someone is going to consider 'romantic', although I can sometimes guess.

So why have I published what I clearly think is a very ordinary, not terribly interesting photo? It gives me chance to muse on this curious word 'romantic'. It is a word often applied to France, and in particular Paris. I simply don't know what the word means in this context and what the attraction of this notion of 'romantic' is. Is it a synonym for 'sentimental', or 'fantasy', or 'idealised'? Is it a word that means something different to everyone? Has it changed its meaning over time? Would the context it is used in today be recognised by Wordsworth or Shelley? What about Baudelaire or Hugo? Specifically, what is it that 'romantic' means to you and why?
Posted by Susan at 09:00

The feeling of bliss which comes about after certain activities including sitting or sleeping in French sunshine, whiling away time in a French coffee bar people watching ... the bliss that comes whilst looking at architectural history in somewhere like Nimes... the bliss of freedom and space, horizons, skies, mountains, changing landscapes, blossom time.....the crumbling ancient, the rural idyll, the eloquence and elegance conducted by the most humble of citizens..... I LOVE IT... romantic literature, art, music, people.... mmmmmm..The French romantic dream is in snow, a rainy day, a hammock in a heatwave, in the sound of cicadas and frogs...... oh where do I stop? That's at least a first response..
It's the deep profundity held in the stones... in the smells of ditches!!!!!!!

I think I must be the least romantic person in France. The word that sprang to mind was "cheesy". I like the photo, nevertheless. Someone has a "useful things I don't need right now but I'm coming back to" corner. P.

France, itself is a romantic perfume for the many, in a notional sense.

'Romantic' is a likely attempt in modern terms to describe a psychic relatedness (recognition of beauty) in contrast to objective interest (rational): Intuitive feeling, common to all humankind embracing desire for wholeness or immortality as 'poets have always known'. Now greatly denied as politically incorrect or shaming to admit.

Why do people need to dream, daydream, fantasize or project romantically ? Because it is an essential connection to an invisible otherness of life's profundity without which we suffer.

We live in a society, hell bent on hyper-rational explanation of everything, which costs us dearly. Intriguing question Susan, glad you asked it.

"Romantic" places are a cop-out. If I take you to a "romantic" place and you don't feel romantic, then it isn't my fault: there's obviously something wrong with you.

Or am I just being a cynic?

Spot on Simon...
to me being romantic is taking Pauline a cup of tea in the morning, or breakfast in bed...
or scrubbing her back in the shower.
Being romantic is a personal thing...
I don't know whether or not Pauline feels that I'm being romantic...
men don't ask!!

And I agree with Susan about the picture...
to me it isn't romantic...
it is a good workable image tho' and a good spot.

Personally, I would wait until there was no sun in the picture...
photograph it wider...
knock out the colour...
crop it shallower...
add some grain and a sepia tint...
and call it...
"A Corner of ye Olde Barn".
Then milk it for all I could get...
from Cadburys!!!!

An answer is in the song of Léo FERRE : "Les romantiques".
I don't speak English but I want to tell to you how "Days on the claise" is for me a marvellous travel and Preuilly a village where I am so happy to have a little appartement however I live an exceptional city : Arles.

I like the photo but I wouldn't call it romantic. Romantic to me would be a garden with a bower of roses, for example, somewhere where you could sit and relax and forget everything that is part of the everyday world. That is why many people consider France and Italy romantic - they are different from what they are used to.

Romantic is swooning over stuff you will never have to live with or use...

Many thanks for all your thoughts. Most of you are describing situations or feelings that it would never occur to me to describe as romantic, but rather in the terms you use when you have to explain romantic, so I am quite fascinated by the responses. My conclusion is that it is mostly semantics.