Tiles and slates on the same roof slope -- a sure sign of repair. 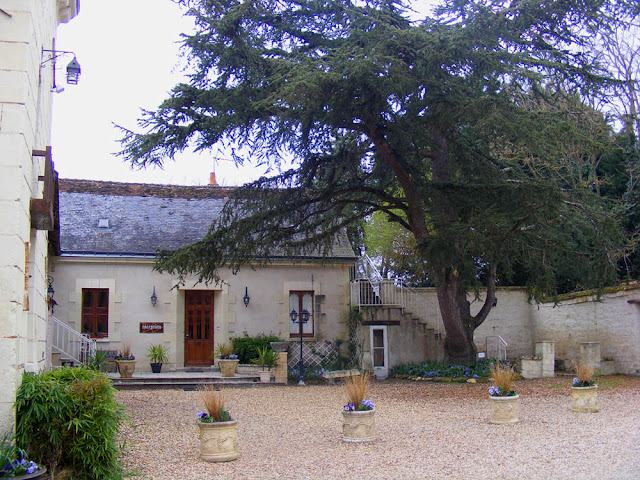 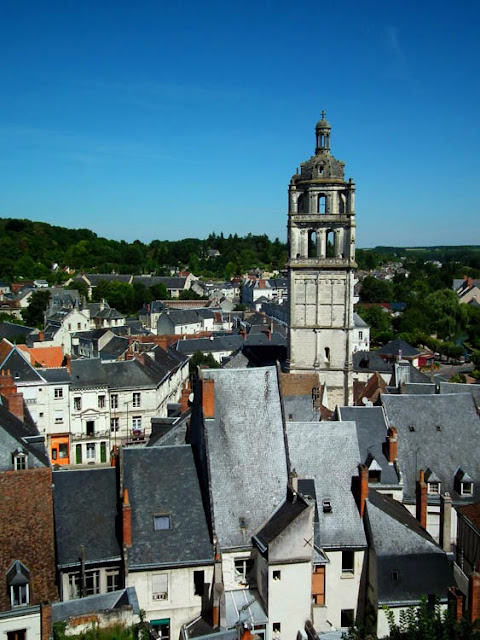 In the majority of cases, roofs of two symetrical slopes are favoured, inclined at an angle of between 40 and 45°.


Slates covering the walls as well as the roof. 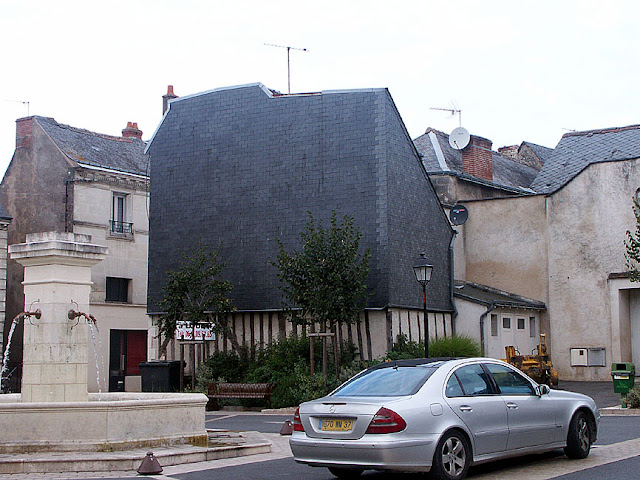 
A complex of buildings with a mixture of tiles and slates on different slopes. 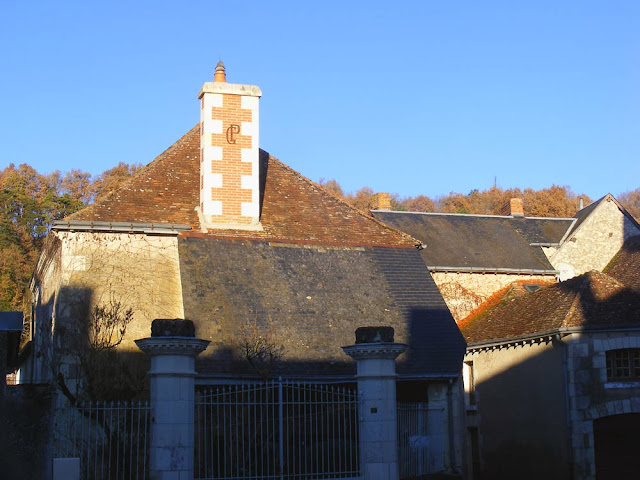 Materials (les materiaux)
The presence of tiles and slates on the same slope of a roof would not have been the way it was done traditionally, but it is a style of roof repair which it is better to avoid when the entire roof is redone. 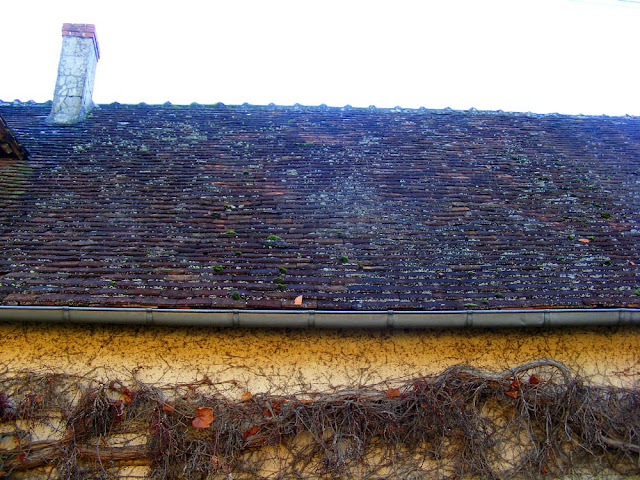 Flat Tile (la tuile plate)
During the 19th century, local artisanal tile factories experienced a boom. Flat tile became the material of choice, still visible on numerous buildings in our towns and villages. It is as well represented on industrial buildings as on dwellings. The roofs are made of small flat tiles in red-brown or orangey-red, depending on their source and state. That's why tile roofs aren't very homogenous and the effect is to blur the colours. 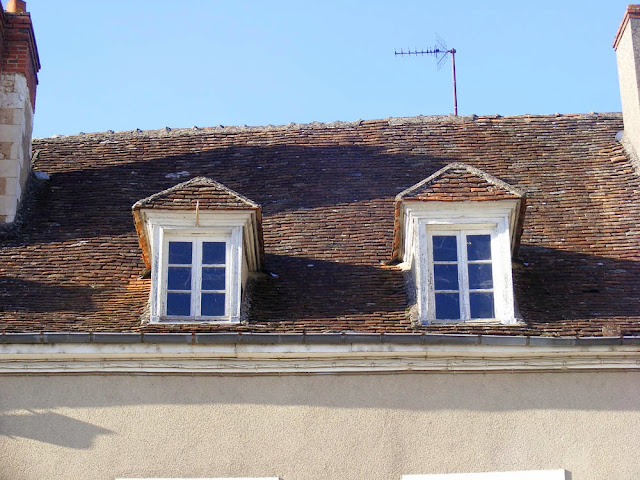 One peculiarity of the Touraine persists in Richelieu, where you can sometimes find a tile called tige de botte ('boot upper').  It looks like a roman canal tile, but doesn't have the same dimensions.


Slate treated decoratively and solving a practical problem at the same time. 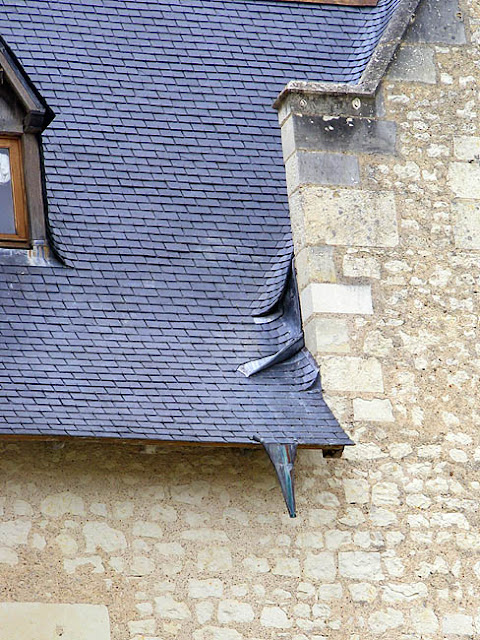 Slate (l'ardoise)
Coming from the Angers basin and transported up the rivers, slate was reserved for the nobility. If its light weight rendered it easier to transport on the river, its delivery was nevertheless costly. Over the course of the second half of the 19th century slate little by little became more widespread along the banks of the Loire, in the centre of towns on maisons de maître (elegant town houses), before spreading into the countryside. 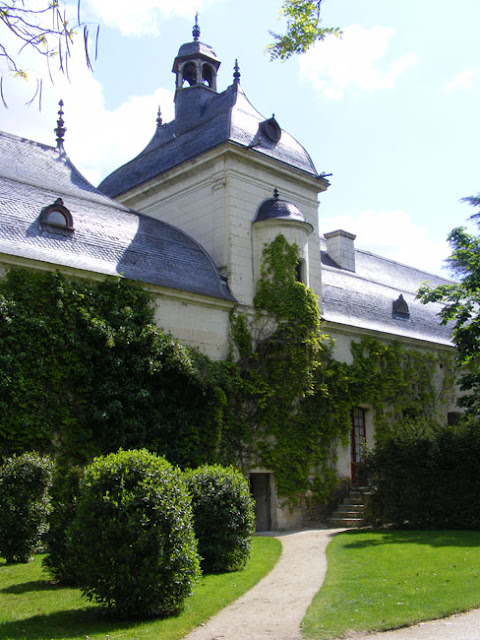 Sealed by metal sheets, slate can be adapted to all roofs with a slope between 30° and vertical. They are attached with a nail or a hook, preferably black in colour.


Slate can be shaped into many complex curves and angles. 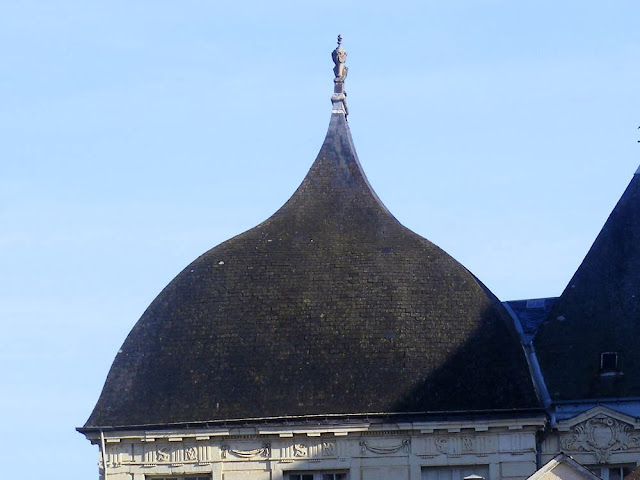 In Conclusion
To obtain the best effect it is recommended for restorations to choose traditional flat tiles. The advised density is 60 to 75 tiles per m² minimum, depending on the pitch. It is to be regretted that today, tiles are tending to disappear in favour of slate.


Slate and tile roofs, with the middle roof showing the metallic flashing which ensures the angles are waterproof. 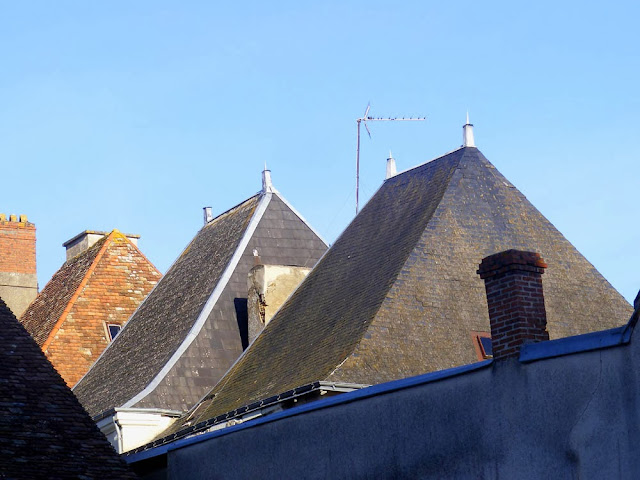 Email ThisBlogThis!Share to TwitterShare to FacebookShare to Pinterest
Labels: Chaumussay, Loches and area, Pictures of Chateaux, Pictures of Preuilly, Roofing

I had the tige de botte tiles on my first house south of Saumur and at that time the small tileworks up the road was still making them.
A year or two later and it would have been too late to have restored the roof properly as the tileworks closed when its owner retired.

Part of the problem around here is the cost of the real tiles!
The machine made ones are not much cheaper... look glossy and too orange... and don't blend well at all.
Loic, our roofer, goes and dismantles the roof from buildings that are being demolished and stocks the tiles in his yard.
If he has to use new tiles, he tries to tuck them away out of sight...

Slate, imported from China, is exceptionally cheap at 33 cents a slate that's at least twice the size of a tile!
A new machine tile is 50 cents...
a handmade flat tile is close to a Euro!!
However, it doesn't match the local slate, noe are the tiles as thick!!

I love the slate used decoratively...
especially the wonderful curves...
and the culmination in the copper beak of a downspout!!

Yes, we have a roof that combines slate and tiles. As Tim says, the problem with the tiles is the cost. We have a couple of roofs to repair and are not yet sure what we'll be doing about the material.
Have you ever been to the old slate-mining area near Angers? The cycle path goes straight throught it. http://www.aussieinfrance.com/2011/12/a-barge-on-a-cycle-path-in-the-loire-valley/

When I left France roofers were increasingly using Spanish slate as being considerably cheaper than that from Angers.
A trip to the Trelaze area still shows dumps of slate in all sorts of unexpected places and a visit to the Mine Bleue at Noyant la Gravoyere is decidedly instructive.

A roofer friend managed to find Brazilian green slate - vivid - to make a band on the slate roofed tower of his house...luckily tucked away behind trees out of sight of the local historic monument as consent to it would certainly have been refused, yet it looks perfect in its setting and the whole roof is a tribute to his skill and artistry.

Angers slate is almost non-existent now. The remaining seams are too deep to be extracted economically. Most people, like us, get Spanish slate, at about 70c per piece for new roofs. Our roofer would have refused to do the job if we'd insisted on Chinese slate. The quality of Chinese slate is very poor. Spanish slate is also a different geological layer to Angers and is not quite as good, but still has a lifespan of 75 - 100 years. Angers slate is the same as Welsh slate and is the best quality in the world.

For tiles we went to the factory near le Blanc. We were told by an architect friend that you get what you pay for with terracotta tiles. The more expensive machine made ones from the brico stores are OK, but not the cheaper ones.