Taking the Tram in Tours

A tram pulling into a station. 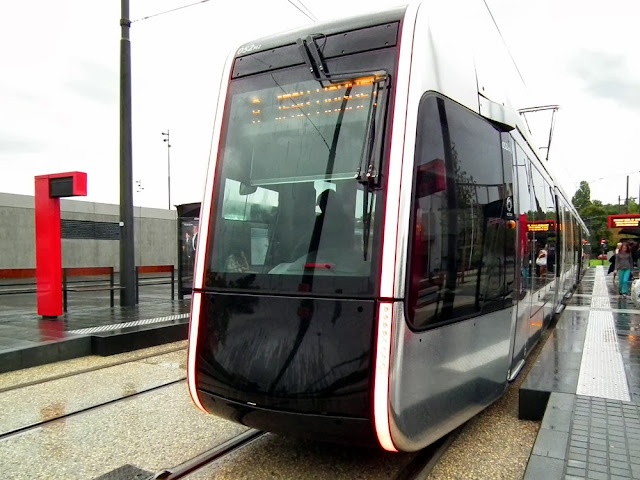 After 3 years of distruption the new tramway in Tours is finished and running. The trams themselves are modern and sleek. The track winds its way for 15 km from the northern outskirts of the conurbation near the airport to Joué-lès-Tours in the south, crossing the Loire and the Cher rivers and even the motorway.


This photo was taken from inside the tram, more or less in the same place as this photo, taken when the works were in progress. 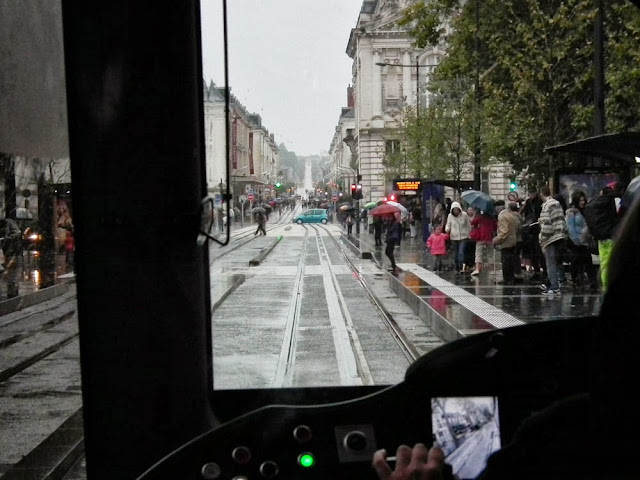 We had a day off on Saturday, and even though it was the most miserable rainy weather, we took ourselves off to the Paris Store for some Asian cooking supplies. As a treat afterwards we caught the tram at a nearby stop and rode it all the way to Joué and back.


Much of the track is laid in turf, which will be sprinkled with low growing wildflowers in the spring and summer. It adds greatly to the attractiveness of the tramway, especially in residential areas. 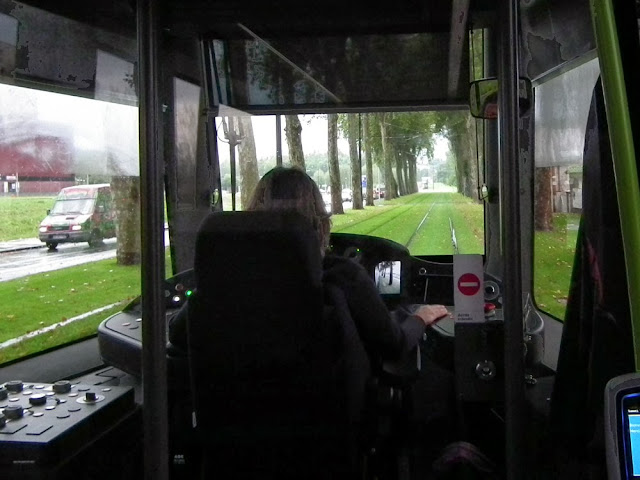 We weren't the only ones on the tram just taking the ride to see what it was like. Each stop is clearly signalled by a little tune then the name of the station. Slightly disconcertingly, if the stop is an interchange this is signalled by the tram breaking into somewhat operatic song.


Our tram meeting another coming the other way. 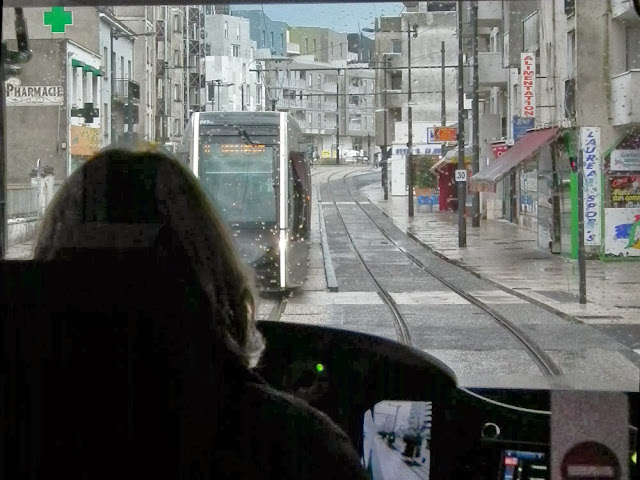 I highly recommend hopping on the tram if you are a visitor to the city. It will give you an excellent overview of what Tours is like.

Sitting in a country whose national government has just been shut down by the temper tantrums of a bunch of emotionally seven-year-olds, some of whom were instrumental in refusing federal funding to improve mass transit in various areas, I can only sigh in resigned envy.

It certainly does look sleek. I like the idea of the wildflowers in spring.

Emm: Yes, the situation in the US is interesting at the moment. It will turn into an historic event I think. I now look back on the time supply was blocked in the Australian Parliament with a sort of nostagic excitment. Let's hope the American people don't get too nervous, and stand by Obama. The other side winning is too depressing to contemplate.

I was in Tours while it was being built....but it looks as if the chaos was worth it.
i love the idea of turf and flowers.
Friends tell me it has been deliberately derailed about three times so far, so clearly not everyone is grateful!

Fly: I'll be watching the development of the flowery turf with interest. They had an experimental plot out between Saint Pierre des Corps and la Ville aux Dames so they could see what would be suitable. I hadn't heard about the derailments, but then I rarely read the paper, so often miss stuff like that.

ooooh ..can't wait for mobility so that I can set forth for Tours and the trams..it's almost a year since I visited this beautiful regional town.

One of these days! The last time we were in Tours Nord, we saw the signs that they were doing practice runs. Glad to see it's now open for business!