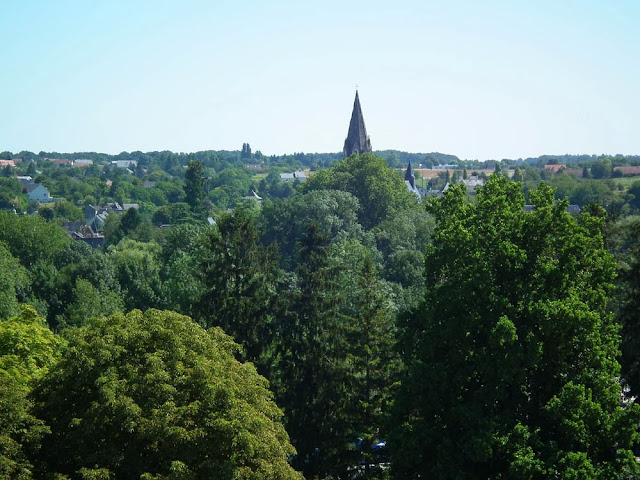 Beaulieu-lès-Loches sits just across the Indre river from Loches. Many of its buildings have a sort of warm and crumbling antique look, very picturesque. The huge church spire in the middle distance is attached to the remains of an enormous abbey commissioned by Fulk Nerra ('the Black Falcon'), Count of Anjou. This remarkably active and long lived 10-11th century war lord is buried in the church here and it is his legacy that the Plantagenet kings of England inherited when his descendent Geoffrey Plantagenet married Matilda of England in 1128.
************************************************************
Fungi Foray: The Association de Botanique et de Mycologie de Sainte-Maure-de-Touraine is holding a fungi foray in the Forest of Preuilly on Sunday 27 October. Meet at 2.30 pm in the Etang de la Ribaloche car park. From Preuilly, take the D725 towards Azay-le-Ferron. After 5 km, at the lieu-dit La Lieutenauderie, turn left onto the D63c towards Obterre. The Etang is 2 km along this road. Coming from Loches or Ligueil, don't go all the way into Preuilly, but take the D725 to Azay-le-Ferron. As usual, the fungi collected will be laid out and identified by experts at the end of the outing. The emphasis is on identifying all types of fungi, but there is nothing to preclude you concentrating on collecting edible specimens for personal use.

Susan, have you signed the petitions to get ex-pat MPs established in the UK.
If not I'll send you the links.
France has seventeen of them... they are there to represent the interests of ex-pat French citizens... especially when descisions made might adversely affect those living or working abroad.

Tim,
Having a dual citizenship, I'd be interested in the links concerning French expats, if you could kindly send them to me, since I reside mostly in the U.S. Please ask for my email address to either Susan or Ken. Thank you.

Glad you enjoyed that book on the Deuche! Still missing mine after all these years!

Tim: I've seen it somewhere, but doubt if I could find it now. Send it to me and I'll forward to chm.