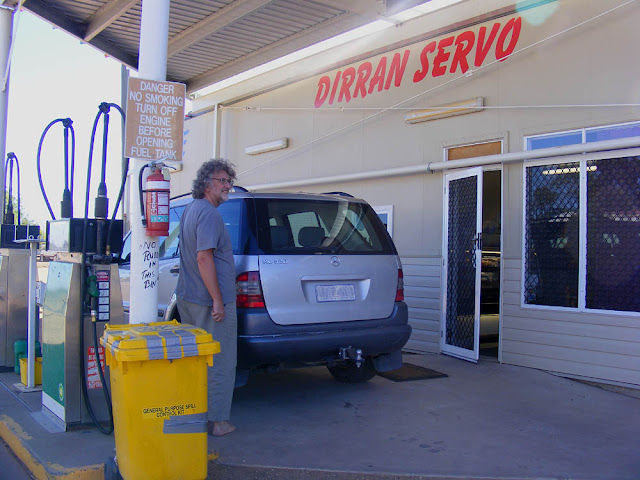 Filling up with petrol at the Dirran Servo (ie the Dirranbandi service station) last December. It's the only fuel available for many kilometres. The servos in the other small towns on the route in this area have all closed.

Cherry Trifle, made with lady's fingers soaked in cherry vodka syrup, jellied home grown black cherries and custard topped by cream and decorated with sour cherries pickled in vodka and a sprinkling of choc chips.

Garbure, made with confit de canard, a jar of gésiers I had lurking in the back of the cupboard, a load of root vegetables, a can of beans and some ham stock. Oh, and cabbage.

Pizza, topped with buffalo mozzarella and char grilled peppers. I made the dough from half white wheat flour and half wholemeal spelt flour. Served with a green salad.

Love the general purpose spill control kit!!! Taped shut with duct tape so people con't us it as a bin!

Bet it was filled with just sand.

Saffron flowers ARE pretty... but as they are up at your orchard, you can freely pick them and enjoy the colours at home...
unless, of course, you have conducted a "straw" poll amongst your wildlife up there and they want to keep looking at them!!
Anyway...
you'd better nip up there and get them before the storm hits!!
And why not dry or press the petals and keep the colour for a little longer...

Leeks gone to seed... too dry, treat as a winter crop here, mine are just beginning to swell nicely...
same with most Chinese and Oriental veg... "Green in Snow" which we saw being grown [and bolting, where it wasn't wilting] in a polytunnel at Ryton... in the summer... means green in snow... a winter crop [the clue might be in the name there?]... even Chinese cabbij needs to be sown late [end of August] and initially protected from heat.

Your trifle sounds wonderful. My
mother used to make hers with
lady fingers soaked in sherry. And
I do mean soaked...you know how the
English love their sherry.

Tim: The wildlife do like them -- at least one has been munched well and truly. In fact, I freeze them, in the vain hope that one day I'll get back to textile dyeing -- they produce a blue green dyestuff.

Sheila: I was fairly careful not to drench the cake. Trifle can be a bit overpowering if the alcohol is overdone.

Col - Around there, sand ain't just sand. Sand am topsoil.