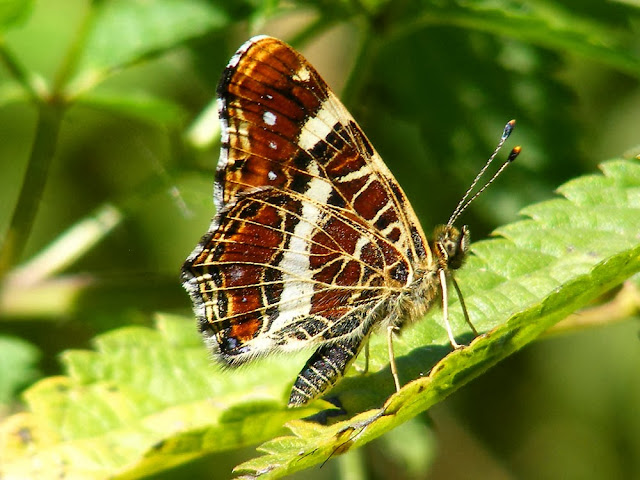 A Map butterfly Araschnia levana, demonstrating the reason for its vernacular name. The underside resemblance to a street map is so striking that is also called la Carte géographique in French. This one was photographed in early September, along one of the rural tracks behind Preuilly. It is quite a small butterfly, and this year was abundant in the late summer. To see what the upperside looks like go to this earlier post. 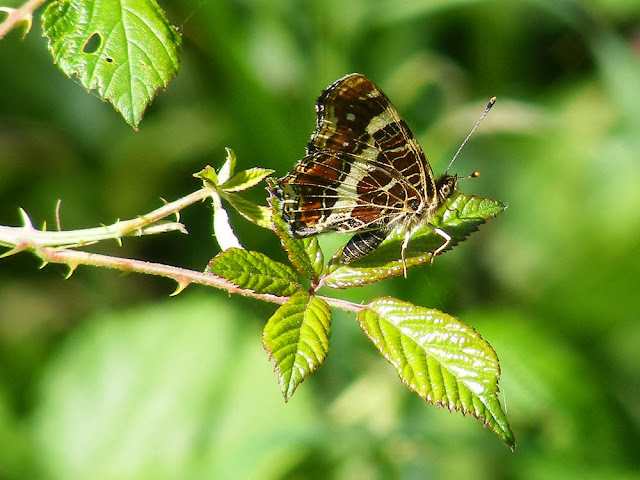 There have been loads of Maps, haven't there...
apart from the normal P'cox, R'amirals and Wightz, the Maps have been second only to the vast number of Clouded Yellows around...
saw six Cloudeds at the same time as I mowed the other day.

One thing brightened yesterday's dull wet though...
an utterly mad Humming-bird Hawkmoth working the Gaura flowers in the front bed...
in the teeming rain!!
Needs its antennae checking that one!!

I had to look up white milk loaf (pain au lait, I guess) because it wasn't even clear to me that it was a bread. Anyway, I imagine it was good. A few days ago I made a loaf of bread with 400 g of plain flour, 160 g of cornmeal, yeast, salt, honey, and water. It's a nice bread for morning toast or noon sandwiches.

Ken: white milk loaf is what sliced white supermarket bread is aping. Andrew Whitley, author of Bread Matters, who I turn to if I have a bread question has this to say: "The addition of milk to a bread dough has a pronounced softening effect on the crumb. This, and the nutritional benefit of the extra calcium, is probably why it was a nursery favourite. For those striving for softness in dough, milk is a much better way to achieve it than the hidden enzymes added by the baking industry. Whole milk gives the fullest effect, but semi-skimmed will still make a difference." Milk bread is the same as pain au lait so far as I know.

Well, I shall look out for that one! I suppose I shall have to wait until next year now that it's getting cold. Is that right?

Fraussie: yes, these overwinter in the chrysalis, ready to emerge in April, unlike your Peacock, who will overwinter as a hibernating adult. I haven't seen a Map now for at least a week since the weather got colder.