The general appearance of celeriac doesn't inspire much confidence in it being tasty, and even less so if you consider eating it raw. Nevertheless, the most popular dish using celeriac (céleri-rave in French) does indeed use raw, grated celeriac.

Don't be fooled into thinking that this is diet food though. This is a dish to which cream is added in order to make it lighter (!!) and easier to digest (!!!) It is tremendously popular in France, but I don't think many people bother to make it themselves. Most people buy it from their trusted local charcutière traiteur (delicatessen). If you do make it at home, it's not just a matter of grating some celeriac and coating it with mayonnaise. There's a trick to getting the deli style céleri rémoulade, as Ken explains in his blog. David Lebovitz has a recipe and discusses the tricks to making it on his blog too. 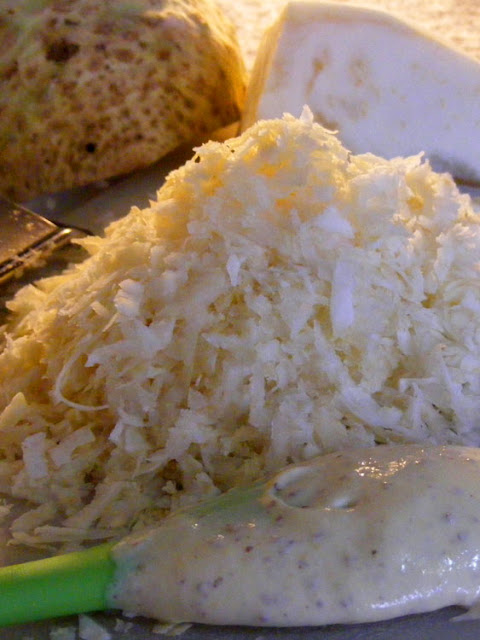 Make a mayonnaise by putting a whole egg and an egg yolk in a jug. Add a dollop of prepared mustard and some salt. Using a hand held blender, whiz the egg and mustard together, then start blending in a thin drizzle of olive oil until you have about two thirds of a cup of mayo. Then switch oils and add some sunflower oil in the same manner, until you have about a cup and a half of mayo. Next tip in a pot of thick cream (I use the 40% fat raw cultured cream I buy from my laitière) and whiz that around until it is all blended in. 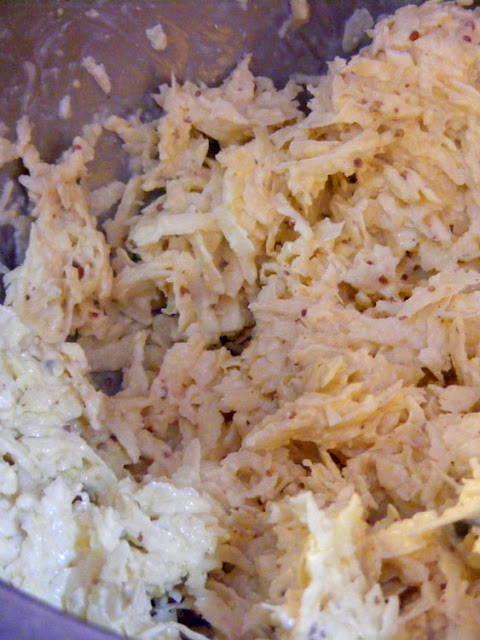 Now peel the celeriac. I find the easiest approach is to slice off the outer layer with a chefs' knife, like I would for pumpkin. Cut the peeled root into big chunks and grate it to medium shreds. If you are grating by hand, as I do, since I don't own a food processor, it is a good idea to do it in stages and coat the celeriac with the mayonnaise as you finish grating each chunk. That way it doesn't discolour. Once you've grated all the celeriac, add more mayonnaise if you think it needs it. For an average sized celery root, about the size of a small melon, you will need to use about half the mayo you've made (use the rest on warm potato salad...).


Céleri rémoulade (at the back) as part of a mixed plate of salads. 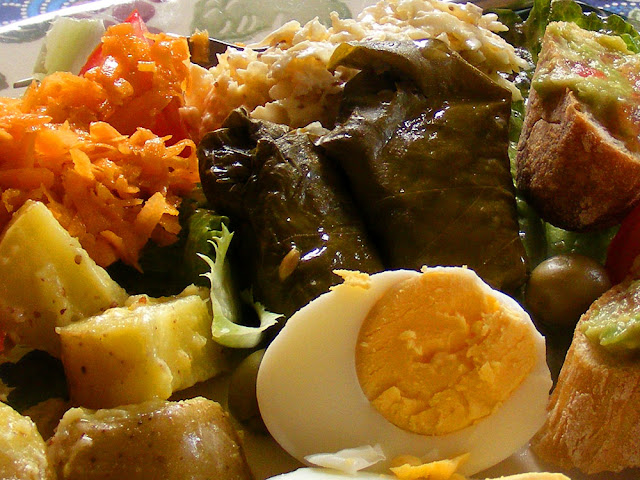 The vegetable may be ugly, but it is aromatic (smelling of celery) and in a salad adds a crisp texture and a distinctly nutty flavour note. And homemade céleri rémoulade is quick, cheap and easy.

I adore celeriac used this way...
but what do you do with your peelings and the thick rooty leftovers?
Compost them?
Or freeze them for use in soups and stews?
The latter is my preference... if put in a stew early, they impart their flavour before becoming part of the gravy...
in a thick soup they get blitzed with a whizzystik, anyway.

On another tack...
Can you use some roquette?
We have rather a lot!!

Tim (or, I suspect, Pauline): I compost.

Thanks for the offer of rocket, but we don't really like it (usual story for me -- too mustardy). Do you want some more grapes?

I don't know why it is called "céleri rémoulade" since the rémoulade sauce is quite different with capers and/or gherkins. I have never seen this delicacy with anything added to it. The basic sauce for this is, as you said, made only of mayonnaise, mustard and cream. And salt and pepper, of course.

No not Pauline....
she doesn't do all the "...."s and also puts P. at the end if she's commenting from the laptop.
Oh...
and your Canadas look just like our Reinette Blanches!

Tim: Reine de Canada is what the previous owner of the orchard marked the tree as on his plan (I think it should probably be Reinette du Canada). It also looks a lot like a variety called Reinette Grise du Canada, and there is a Reinette Blanche du Canada.

Susan, your link to Davd L.'s blog doesn't work for me. I looked his recipe up and found that he uses only mayonnaise to dress the celery root. That's not authentic from my point of view.

When I make a whole-egg mayonnaise using a stick blender, I don't bother drizzling in the oil. I just dump the egg, mustard, salt, pepper, and oil in the recipient, with a few drops of vinegar, and then blend. Works like a charm.

Ken: Thanks for alerting me to the broken link. Fixed now. I thought he mentioned cream, but re-reading it I see you are right.

Not sure I'm brave enough to just chuck everything in a jug and whiz!

For me, the stick blender mayo works that way. It's miraculous.

I just found a recipe for céleri rémoulade made with no mayo and no cream. Just 125g of non-fat fromage blanc and 250g of non-fat yogurt, plus mustard and vinegar or lemon juice. Worth a try, I think.

I wonder if the non-fat fromage blanc could be replaced here in the States by non-fat cream cheese?

In France it may be worth trying just "Velouté" instead of fromage blanc and yogurt.

It's the sauce that make the taste, isn't it? I'm including the post in my Wednesday's Blogger Round-up today.

Chunks roasted in the oven are great...so are chips - par boiled then fried.

Fraussie: no, I think the celery root has a subtle but important flavour that should come through the mayo.

Fly: I like it roasted too, and in mash.