Chasselas is a variety of grape widely grown in the Touraine, but mostly by domestic gardeners growing it for the table. It is also grown commercially for the table and is considered a great seasonal treat in October. There are a few appellations which use it for wine making and I imagine it is widely used by non-commercial winemakers here. 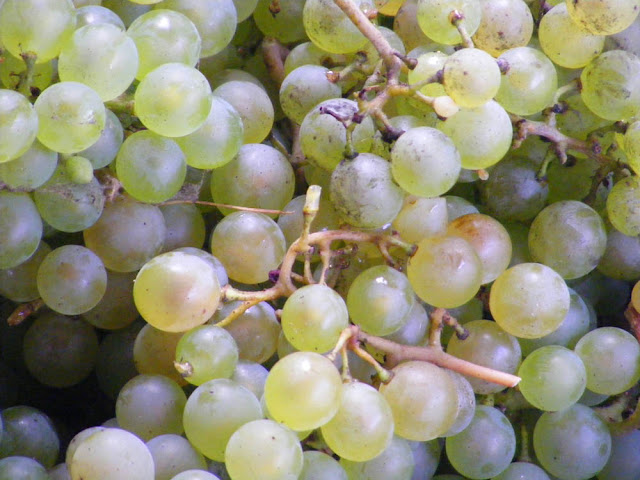 The grapes are small, green and globular, in small dense bunches and gaining a golden tan when ripe. They have seeds, but are considered so delicious that even the supermarkets stock them from September to November. 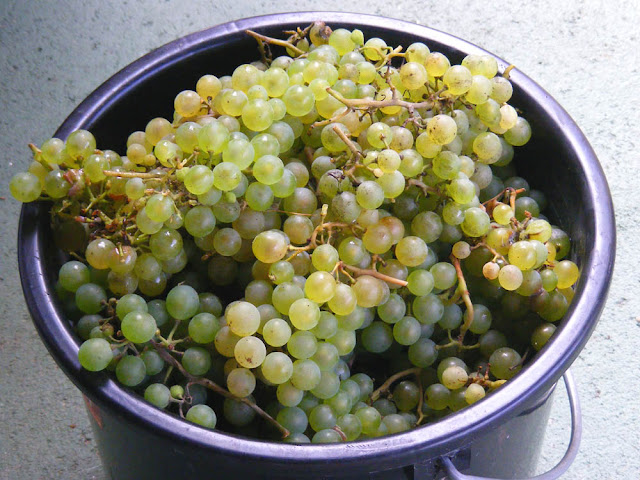 Part of the bountiful harvest of Chasselas from a vine trained against a barn at the house of some friends.

We have a couple of Chasselas vines in the orchard. They were grafted onto the rootstock by our orchard neighbour for the previous owner and planted along the fence near the potager gate. They produce small quantities of nice grapes, but I think are not really happy.

***********************************************************
A la cuisine hier: Swede and Celeriac Soup. Sounds ghastly doesn't it? Well, try it and you will be amazed (unless you are Simon, who was merely amazed that I thought it was really good). Dice and sweat an onion, 2 swedes and 2 celeriacs. Take your time and get lots of caramelisation happening, then add a litre of stock, 2 bay leaves and salt and pepper. Simmer for 25 minutes until really soft, remove the bay leaves, then add a quarter cup of milk and a handful of chopped celery leaves. Whiz to smooth, then add more salt and pepper to taste (be generous with the pepper). Swedes are what French and American people call rutabagas and Scottish people call turnips. You could use young real turnips in this recipe quite successfully too. Apart from diehards like Simon, I reckon the nice combination of sweet and savoury, without too much bitterness, would be an excellent way to convert people to eating swedes and turnips.

Clafoutis, made with homegrown sour cherries that have been soused in a vodka based syrup.

North African Style Potatoes and Beans. I used a can of the small green beans that are called flageolet vert in French. The potatoes and beans are cooked in a tomato sauce spiced with ginger, cumin and smoked paprika.
Posted by Susan at 09:00

That soup sounds delicious. The beans and potatoes too.

I agree, the soup sounds lovely.
I happen to be a fan of swedes.
Celeriac shows up in our market
on occasion, and I've been keeping
an eye out. I think it's considered
an "exotic" here in Texas, meat and
potatoes territory.

Horrid news stories about the fires
in Australia...and so early in the
season.

Ken: well I've got more of both in the freezer, you'd better come over :-)

Sheila: yes, and Tony Abbott is apparently trying to ban the media and government agencies making any connection between the fires and climate change.

Chasselas grapes are my absolute favourites - I dislike those thick-skinned Italia things (that people incorrectly call Italian). I didn't know they grew in Touraine though. We're getting one ASAP. I even know where I'm going to put it! I also eat "muscat" grapes when the chasselas sadly disappear from the market.

Fraussie: You should be able to get one very easily. It is the only variety of white table grape I have ever seen for sale in the nurseries and plant centres here.

My first neighbour in France showed me how she kept the best bunches to be eaten at Christmas.
I didn't have the same success rate as her...but what I had was good enough...

Fly: I remember you mentioning this before. It would be well worth doing if you have a productive vine.