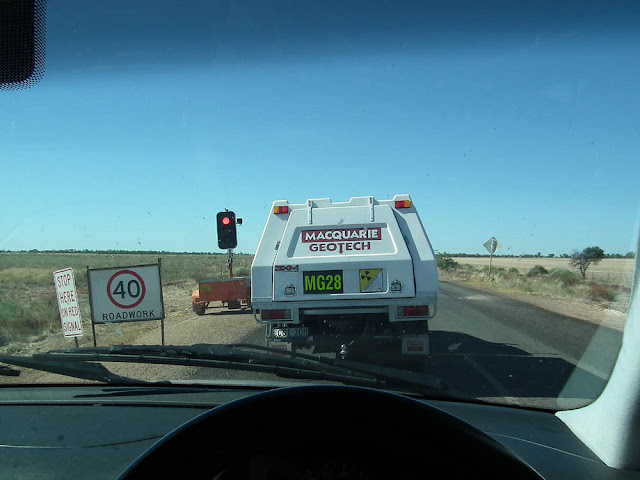 It was slightly disconcerting to find ourselves parked behind a vehicle proclaiming itself to be radioactive. I assume this is a geologist working on the local coal seam gas mining operation. Macquarie Geotech has strong links to the coal industry. I guess he is carrying samples that may contain radioactive elements such as radium. Or maybe he's just fed up with having his equipment nicked...

This is on the Castlereagh Highway between St George and Hebel in Queensland. The roadworks were part of a massive programme, still in ongoing in December 2012, to repair the road after major flooding caused widespread damage in January 2010. 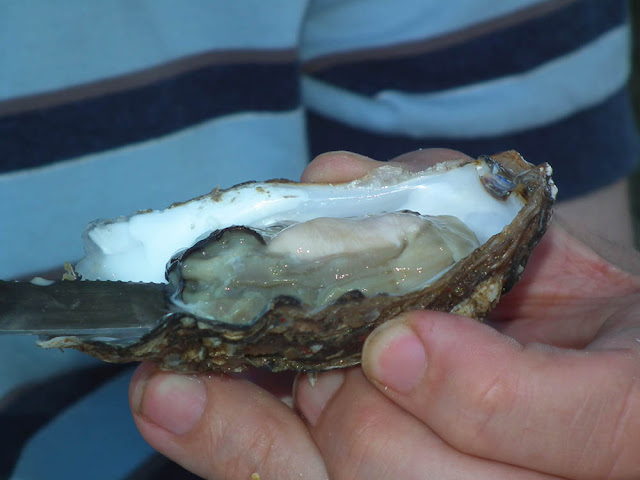 A la cuisine hier: Apple crumble.
Posted by Susan at 09:00

I love the "deterent" aspect...
but they may also be carrying equipment that requires a known source as a calibrator...
viz: for a GM tube...
in a school lab, zeroing against the backgrouns count is fine...
I would suspect that it would not be fine commercially and you'd have to calibrate against a known source.

And the sight of that wibbly oyster in macro turned my stomach!!
Yeurch! I am not a fan of raw oyster...

I'd much prefer the apple crumble!!!
With nice THICK Birds English Custard...
or even tinned Ambrosia Devon Custard....
that's settled the stomach in a virtual way!!

Tim: Home made custard (not from powder) or nothing in this house!

I wasn't excluding the samples...
having used the GM apparatus, they'd most likely grab a few chunks for closer analysis.

The only time I really like home made custard is in a custard tart, or similar... which you just cannot make from powder... the mouthfeel is all
wrong.

And the "virtual" stomach settling was totally undone when I closed the comment pop-up....
there was the ghastly, wibbly grey thing!! Wibbling!!

Tim: surely oysters don't wibble any more than custard from a box?