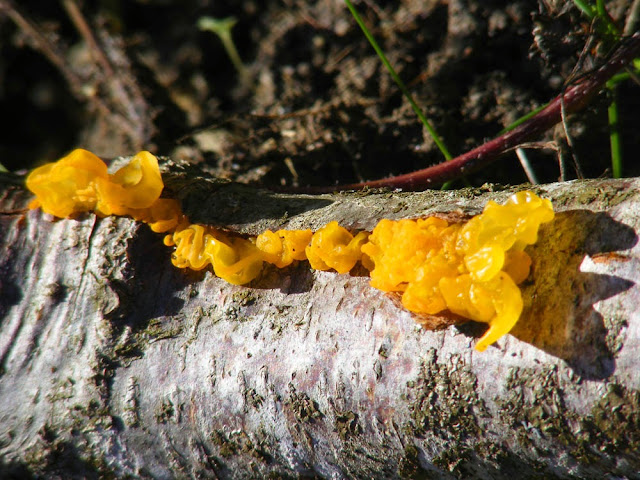 This jelly fungus appeared a couple of weeks ago on one of the long forked poles I keep for propping up fruit laden branches in the orchard. The prop is made from a branch pruned last year from one of the trees (nectarine or apple I think). The fungus is Tremella sp. According to my mycologist friend Paul there are two very similar species, which require examination under a microscope to determine.

********************************************************
Television Offer: We have two old style colour televisions, one small, one medium sized, both in working order if connected to satellite. Anyone who wants them is welcome to contact us and pick them up. We can be contacted by email via our profile links in the right hand bar. If no one wants them I guess we will take them to the tip.
****************************************************
Renovation News: Yesterday we cleared out our front entry hall. We never use our front door, so the fact that the hall has been full of bricocrap for nigh on two years didn't inconvenience us in the slightest, which of course is fatal. Following our whirlwind of activity we now have paint neatly stacked on a shelving unit to the right of the front door and tiles to the left in the porch. The main hall is empty, awaiting me cleaning it, then we can put some more storage units in there and swap some furniture around so Simon's nice dining table can come in from the graineterie and the understair storage is more accessible. Naturally, like every other room in the house, the entry hall actually needs some final touches, like skirting boards, but they are not very high on our to do list.

It's not quite true that the state of the hall didn't inconvenience us at all if I'm honest. For all of the time it has been 'in progress' and a dumping ground we have accessed the graineterie via a step ladder, which is a pain if you are carrying something. But the graineterie has a wonderful set of old detachable steps, which have lain idle propped up against a wall for two years. Now Simon is pondering the problem of how to reinstate them. The hefty wrought iron rings that take the steps' hooks are now too low because we've changed the floor level by laying terracotta tiles. The rings aren't budging no matter what sort of leverage Simon uses on them. Probably we will leave them where they are, at least for now, and put in new eye bolts at the correct level.

If the old eye-bolts won't budge now that you've put them back...
how about asking a blacksmith to knock you up a pair...
then you can leave them outside to get a bit rusty...
that way, it will look like the steps were adjustable...
new eyebolts would look wrong [IMO]... even if you got them rusty...
Another alternative is to shorten the steps at the bottom [and thus restrict the use of the very worn bottom step]...
Final, and probably easiest, option is to move the hooks downward... [there is plenty of space on that wood]...
and fill their old bolt holes with some dowel and then stain it with black coffee or dk.brown shoe polish until you get a close match.

Oh, it all makes work for the working man to do!!

Our recycling depot accepts
electronics on Tuesdays.
Always several televisions stacked
about, many quite new looking.
Even the Salvation Amy is reluctant to accept them for fear
they may to turn out to be defective, I guess.

Tim: all good suggestions, thank you. For the moment we are going for the quick win new eyebolts solution. The stairs are too rickety to stay there forever and ultimately we will get them copied and retire these.

Sheila: our tip is essentially a recycling centre, so if we take the tellies there they may not just get trashed. Electronics go in a special pile.