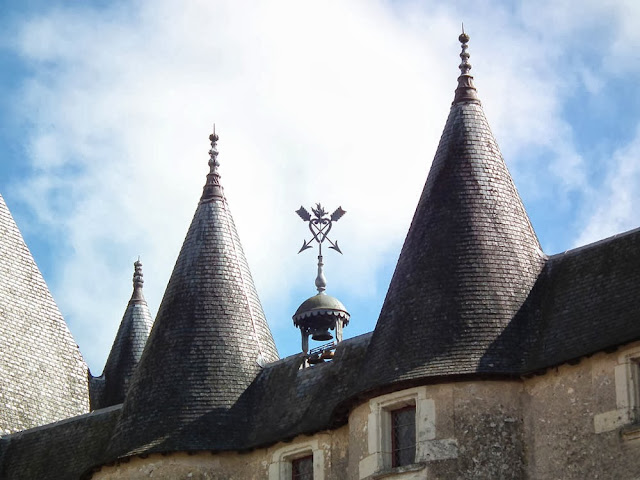 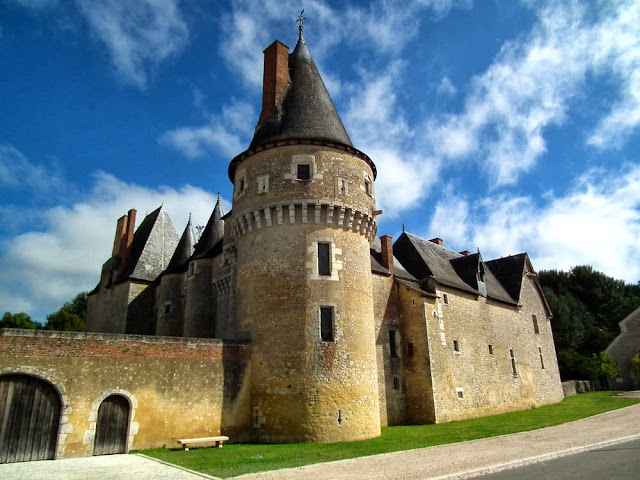 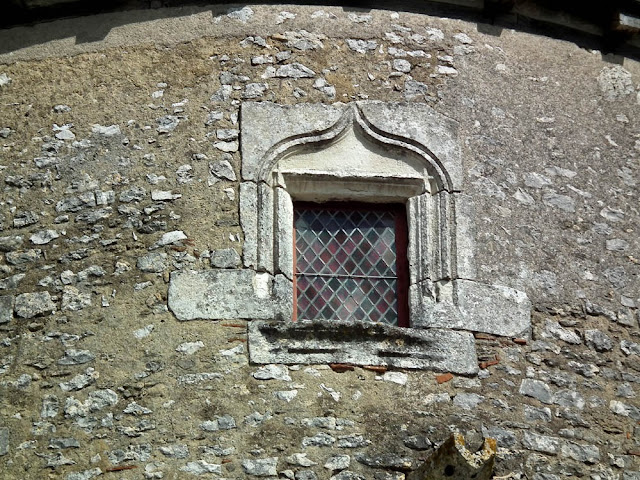 This wonderful late medieval chateau sits in the midst of the village of Fougères-sur-Bievre and gets very few visitors, probably because it makes a great drive-by so people content themselves with that. Also it is not one of the big name chateaux with their luxurious interiors and splendid gardens, and people with limited time will concentrate on those. 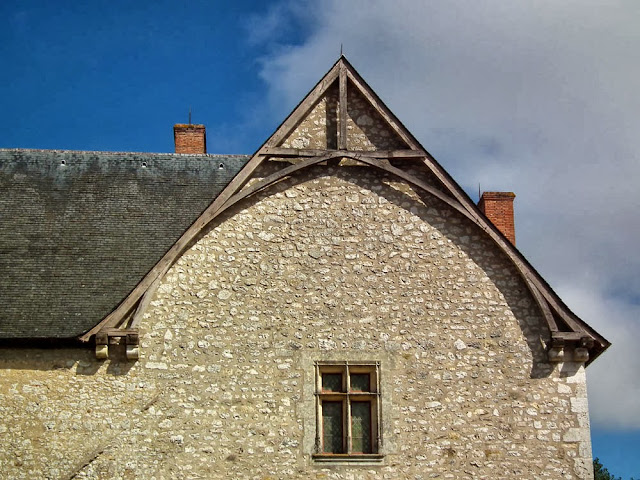 Its survival in such an intact condition is partly due to the fact that it is a defensive chateau built at a time when the family no longer needed to defend their home, due to the outbreak of peace and prosperity ushered in by the end of the Hundred Years War. Consequently it has never been damaged by seige engines or pounded by cannon and has remained a beautiful example of  late 15th century architecture, never subsequently modernised (except for the roof and some minor details) because in the 19th century it was an industrial building and by the 20th century had become state property, listed as an historic monument in 1930. 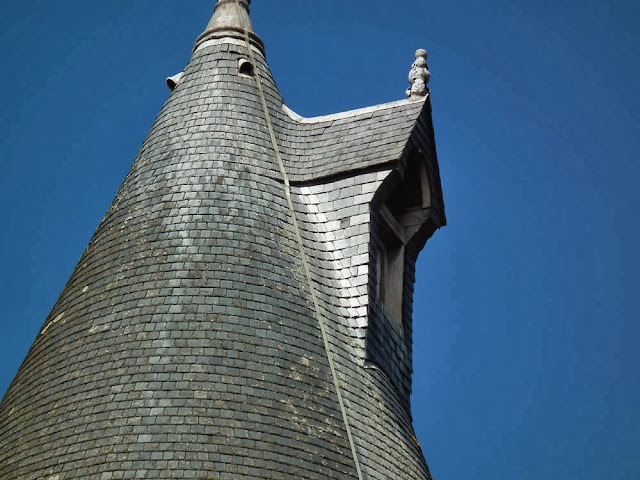 For more details on its origins see Niall and Antoinette's post on Chez Charnizay, 'Twilight of the Middle Ages'.

There is also a lecture on the 'Restoration and Historical and Botanical Interest of the Heritage Herbarium of Ernest-Henry Tourlet (1843-1907)' on Saturday 19 October at 2.45 pm. It will be held at the Salle de Rohan, rue du 11 Novembre in Sainte-Maure. The speaker is Emeritus Professor Marc Rideau from the University of Tours. In French.

Carrot Soup. I used some big homegrown carrots that we were given by friends, our own homegrown leeks, some milk that the laitière warned me was leftover from Saturday. Instead of the usual coriander seeds I used yellow mustard seeds.

One box of the hazel nuts I gathered has been dehusked, and boy, was it tedious. Taking them out of their leafy calyxes is only the first step, and we've only done a third of the total quantity. They still have to be shelled and their inner skin removed. Never complain about how expensive nuts are in the shops -- it's because they are so time consuming to prepare. The big advantage of doing your own is freshness, and you know exactly how long they have been sitting on the shelf. Once they are shelled I will freeze them.
******************************************************
Firewood News: Still no sign of our firewood delivery, but we have cleaned out the wood storage area in the garage. We've got maybe two days wood left.

That gable end with the 'exposed' beam structure is wonderful woodwork!
And the chat itself looks like a 'real' chateau with enough higledy-pigledy roof lines to satisfy.

On the rain front, we didn't see/hear it coming, we were doing things... but then suddenly, someone was knocking on the door...
and as we turned to look...
the big drops that knocked on the door turned into a torrent...
we lost sight of the farm on the hill opposite for a couple of minutes.
It delivered five millimetres in about ten minutes... then stopped!!

Never knew that hazelnuts were just
as much work as chestnuts. So worth
it, though. Awaiting the new crop
pecans here in Texas, nicely shelled. roughly 20 euros a kilo
if I did the math correctly

Samuel Thayer in Nature's Garden says to let the hazelnuts dry for a week somewhere squirrel-proof.

Maybe France is squirrel-proof, but nowhere in the US is!

Then dump the nuts into a barrel or a sack and stomp them to separate nuts from husks. Pick out the nuts; toss the husks.

Squirrels get our crop most years because I've waited till the husks turn brown, and that's too late. Next year I'll be wiser and hope that the squirrels won't be.

Carolyn: they've been stored in our kitchen for over a week (because the pantry has mice). I think stomping them would result in quite a few broken shells.

I really like your pictures of Fougères-sur-Bièvre, especially the second one.

Hazelnuts are just too much trouble to me, as are chestnuts. If I need a few, I just buy them shelled and cleaned. Pecans, however, are really easy to get out of the shell, and are probably the most delicious nut. I miss them. My mother had a great pecan tree in her back yard in North Carolina that produced tons of what were called "paper shells".

Ken: Simon took the photos. I really like the second one too. Hazel nuts and chestuts are really borderline with me -- most years I'll do one but not the other. They really are tedious and time consuming, but I like the satisfaction of growing or foraging our own.

Our walnuts are now dropping more rapidly and collection has started in earnest. Not bothered with the hazel[cob] nuts. Left all for the squirrels :-)