Digging a Medieval Chapel in Loches

The past few weeks has seen a small but important archaeological dig taking place in the grounds of the Logis Royal in Loches. A team from the departmental archaeology service has uncovered the entrance to the private chapel. They had known it must exist, but didn't know where exactly.


You can just make out the checkered pavement and the small dark mark above that on the far side of the doorway is the hinge (opposite the archaeologist's insulated mug resting on the base of the near door column). 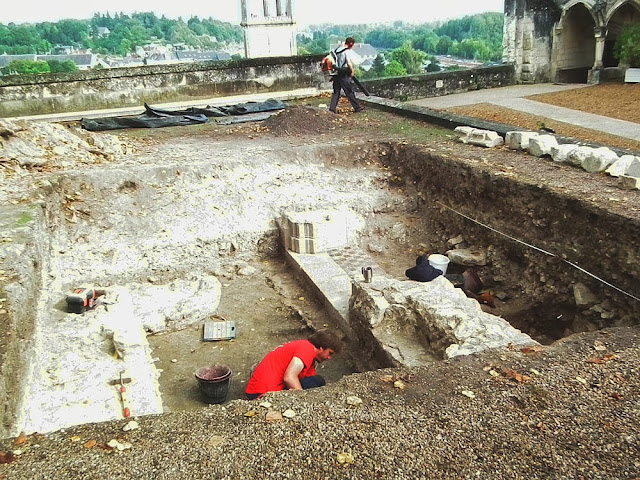 The archaeologists were hard at work one day when I visited with clients, but popped up like prairie dogs out of their hole when I 'bonjour'd' them. One of them was happy to spend a few minutes explaining the site and the purpose of the dig to us.The next time I visited, the senior archaeologist was there with a journalist and a photographer from the local newspaper, so I left them alone.

The archaeologist in charge and the press visiting the site. 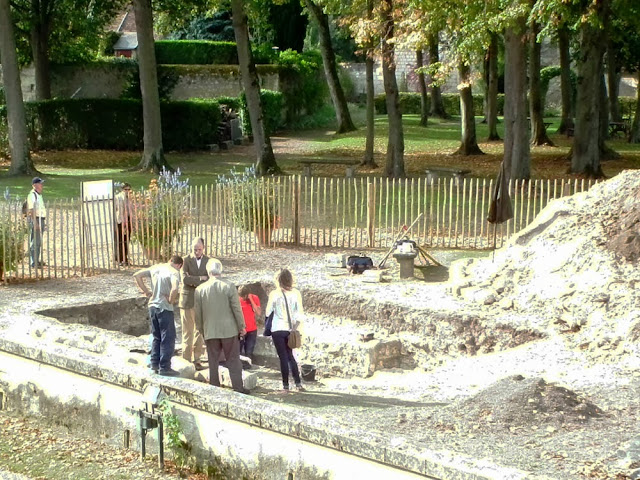 Their dig has been successful beyond their hopes for it. The building once joined the original 14th century section of the Logis (the front half) at right angles and is contemporary with this building. They are thrilled to find the iron hinge for the door still in place and a checkerboard tile floor.

I must apologise for the quality of the photos. I took them on Simon's camera but did not notice that it had been left on the setting he had used for a much more shaded situation. The most frustrating thing is that the hinge and the pavement was clearly visible, but has been burnt out by the over exposure in the photos. Equally frustrating is that I may have slightly better photos taken on my phone a few days earlier, but I have discovered that I can't download them. Simon has worked on the photos above in Photoshop to improve them as much as he can.

Simon barbecued a load of peppers and some of his brined pork loin.
Posted by Susan at 09:00

I'm not surprised they're pleased!

I hope they put together an exhibition about the dig:- it would certainly add value to a visit to the Logis Royal.

Ah, haooy memories of my student days as a volunteer digger! You used to get paid then - just cost of living - now you mostly have to pay to work on an excavation. St Mary Major in Exeter, the moon landings, an American volunteer known to all as Chicago hitting a sealed lead coffin full on with a pickaxe, probably even the astronauts caught a whiff...