On a recent visit to a parcel of vines in Rochecorbon (Vouvray appellation) we had a discussion about the fungal disease esca. It's causing real headaches for the wine industry and we were able to take photos of affected vines and learn about how it is managed.


The characteristic pattern that develops on the leaves of affected vines. 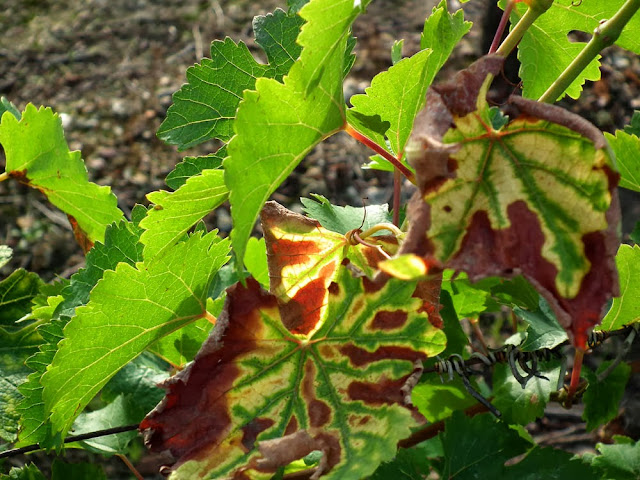 I was impressed at how open the winemakers are about whether they have the disease and how much of it they have. It's the sort of thing that many industries would be very secretive about, just in case it damaged consumer perceptions. However, diseased vines sometimes limp along producing quite useable grapes for years before succumbing, so I guess the winemakers feel there is nothing to hide, and much to be gained by educating the public about what a serious threat it is. Plus, virtually every vineyard is affected.

In the parcels of Chenin Blanc we looked at I would say there is currently one or two vines in every row with the disease. I was surprised to learn that they are just left there until 90 - 95% of vines are affected. They can't be treated as there is no known cure (apart from sodium arsenite which is banned because it is so toxic to everything, not just fungal diseases...). Once the whole parcel is diseased the vines are grubbed out, burned, and fresh certified disease free stock planted. The vines here are being subjected to an outlandish sounding alternative treatment involving sound patterns and the affected plants are counted on an annual basis to see at what rate the disease is spreading. 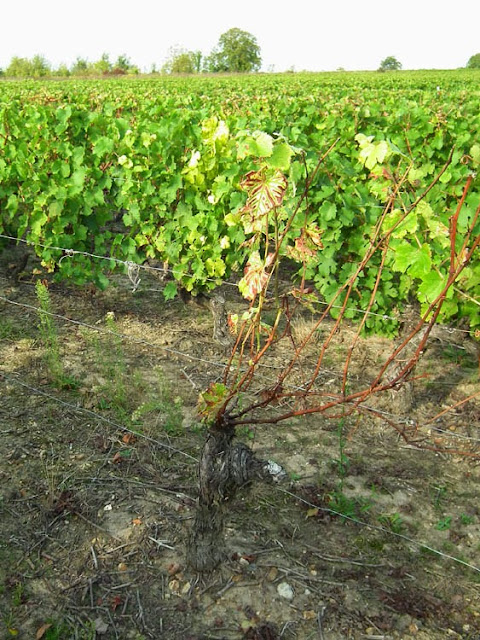 It is not cost effective to replace vines one by one as they become infected, and I suspect it becomes difficult to manage a parcel with grapes of many different ages. It is much easier to harvest grapes from a parcel that is all the same age. I was particularly surprised that infected vines are not grubbed out immediately in an attempt to prevent the spread of the disease though. I was also surprised that the soil is not usually left fallow for a significant period after the diseased vines are pulled out. In most cases the new vines are planted within weeks of the old ones being removed. Possibly these measures are not seen as necessary because no one knows how the disease transfers from one plant to another, so it may be a pointless use of time.

For my previous post about esca, which goes into detail about the effect the disease has on the vines, see here.
Posted by Susan at 09:00

So far, never got your GOOD AFTERNOON e-mail at either e-mail addresses. So, no harm done.

A friend tells me that some of the vignerons affected in his area are grubbing out whole sections and leaving the ground fallow for a year before replanting - so I suppose they are going to end up with blocks of vines of different ages.