A Ringlet, at rest. When flying they are very difficult to tell
from the male Meadow Browns also flying around the grass. 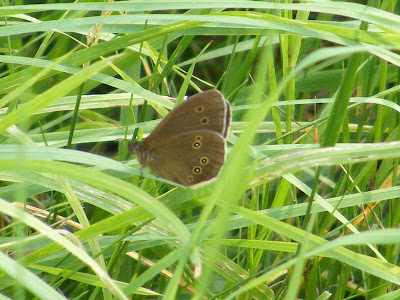 I finally got to do my June butterfly survey, on the very last day of the month. It was quite hot (25C) and fairly cloudy but the wind was not too bad.

The ubiquitous Marbled White (a male). 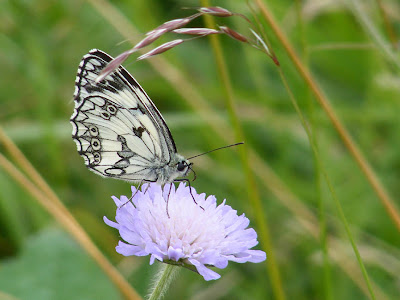 According to Luc Manil, who co-ordinates us STERFistes, it is the worst butterfly year for 7 years. The only species doing notably well across France is the Marbled White. My observations certainly back that up. On my June survey I saw 289 individuals of Marbled White and there was not a single transect where I didn't see more than one. This is more than twice as many of this one species than of all the other 30 species put together. The next nearest in abundance was the Small White, with 23 individuals. The only other species I would note as being more numerous than usual is the Peacock. They are always common, but seem to be a bit more so this year.

Skippers always strike me as cheeky little blighters, but this
Large Chequered is having a laugh - resting on my trousers. 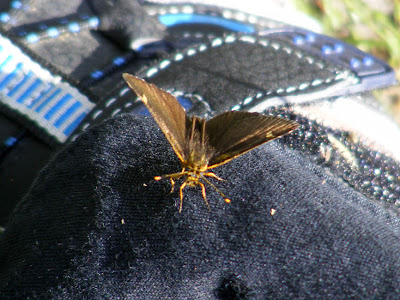 The reason for the absence of several of the Fritillary species, most of the blues, the White Admirals (who had an outstanding year only last year) and the Swallowtails, is the weather. An exceptionally dry 2011 followed by a very cold snap in February killed many caterpillars. Then after a hot dry start to the 2012 spring, it turned cool and wet. The temperature in June was one degree lower than the average for this month. We only received 70% of average sunshine, and around 80mm of rain (that's nearly twice the monthly average I think).

An Ilex Hairstreak walks across some
clematis between two oak saplings. 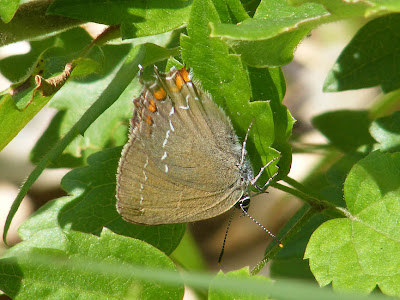 It was so consistently cold and wet in April that I never got to do a survey that month - no point if the weather means no butterflies will be about. My first attempt in May I abandoned halfway through because of a storm and because my Boussay transects were so waterlogged I couldn't access them without rubber boots - again not ideal butterfly conditions. Now in June, two of my Boussay transects have shoulder high grass and all of the rest (bar one which has been mowed) are so tangled and overgrown I could have done with a machete. Miraculously, I had only picked up two tiny ticks by the end of the day! 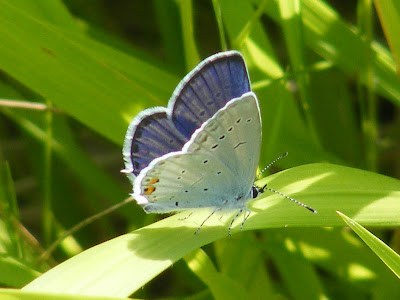 Still, mustn't grumble - it may have rained a lot, but we needed it, and it hasn't flooded here (unlike many places in Europe). I've got a couple of new species for the survey since last year, with (not terribly good) photos. And it's turning out to be a good year for dragonflies (they had a poor year in 2011 with the dry). And the orchids have been good (still a few of the late flowering ones around too - they have also appreciated the cooler, wetter conditions).

We got 89 mm of rain in June here in Saint-Aignan. In that sunny spell we had a week ago, I was seeing quite a lot of butterflies around the vineyard.

Ken: yep, when the sun is out there are good numbers of butterflies, but they are only 1-3 species when they should be 6-8 different species.