Bad News on the Bakery Front

Yesterday when I called in for our daily bread there was a notice stuck to the counter explaining that the bakery was in liquidation and would open for the last time on Tuesday. The other customer in there at the same time as me is a young woman much the same age as Carene Pichard, who runs the bakery with her husband. The two of them have always appeared to be on quite friendly terms, but she was as shocked as me to hear the news.

Carene herself seemed calm and matter of fact about it. I suspect it was a relief to have it out in the open and the end in sight. I did not attempt to get any real details from her, but based on a conversation we had some time ago, I presume it brings to an end an ongoing dispute with their landlord (they don't own the bakery premises) about who should spend the money to upgrade the plumbing and other problems. The landlord would have been perfectly happy for them to plough their money into his real estate and improve it, but he wasn't interested in even meeting them halfway with the expenses, or giving them any sort of equity, and they felt it was too much of a risk. 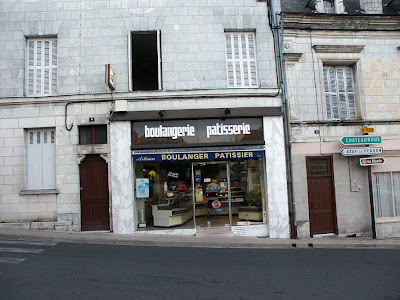 As far as the Pichard's are concerned, it may well be the best thing that could have happened. It leaves Jean-Luc free to get a salaried job as a baker in one of the big supermarkets. This would give the family financial security and according to Carene, the bakery departments at the big Auchan and Leclerc supermarkets are proper boulangeries ie making the bread from scratch, not from frozen dough. At some stage they may move to Le Blanc, where Carene's family lives, but for the moment it seems they will stay in Preuilly and keep the children in school here (parents of primary school age children will be relieved, as it is always worrying when numbers drop in small rural schools). I suppose they will move house though, as they currently live over the shop.

As it happens I had a conversation with their boy (Florian I think his name is...) on Bastille evening. He asked me what I was doing when he saw me heaving a shutter up onto a side door of the house. He was just passing with a group of kids, including his sister, armed with bangers and cigarette lighters (which he proudly showed me). I would guess he's about 7 or 8. He and his big sister are confident, polite and lively children, easily recognised around town by their white blond hair and alabaster pale skin, and often in the shop 'helping'. Their parents too are involved in town life outside of the bakery. Both of them help with fundraising events for the school and I am always having to come up with good excuses as to why I can't attend fundraising belote (a card game) or loto (bingo) gatherings with Carene - ce n'est pas mon truc.

As far as the customers are concerned, it will mean going to the other boulangerie patisserie in town for 5 days of the week, and using the depot de pain at the Vival supermarket on the baker's day off. We will probably make our own bread on these days. Their part time employee, who only works a day and a half a week, can't have been earning very much, but I don't know what her situation is, so I don't know how much it will impact on her.

According to someone I ran into on the way home, the third bakery in town only closed in about 2003 or 04. A few years later, it was one of the places we looked at when we were house hunting. It would have been a real challenge to renovate, and is right on the main road, so it is a good thing we didn't buy it (we almost did). It seems incredible that a town with a population of under a thousand could support more than one bakery, much less two or even three.

French people used to eat a lot of bread; not anymore. Same thing happened in my neighborhood in Paris. Three bakeries closed in the last forty years within a 200/300 meters radius. In the month of August you’re lucky if you can find a bakery not too far away.

chm is right, I have noticed that the French do not seem to eat as much bread as they used to but they still cannot do without it. As our closest boulangerie is about 4 kms away, we often make our own, or sometimes I slice bought bread and put in the freezer. I eat very little bread so it is mostly Nigel.
Sad though that a good baker is forced to close down, I hope that he is happy working at a supermarket.
Have a good week. Diane

Another sign of the times. I always wonder about the boulangerie in LP-P. It gets some passing trade but they don't sell much other than bread - presumably because people don't buy it.

He also does a round when his mother in law works in the boulangerie, although she is 78! I believe his wife works elsewhere.

The price of bread is strictly regulated - who knows how profitable it is? Stupid of the landlord not to invest in infrastructure - it's unlikely that he'll relet and that's another empty shop to go to rack and ruin. Just like Britain.

PG: I don't think the price is regulated any more.

When we've had the bread from le PP, it has always been better than that from le GP is now.... change of baker, change of style.
And at 78, his mum is probably well up to running the counter... it is probably a case of "you try and stop her!" Also, if he took the shop over from his parents, she probably sees it as her duty to make sure he's running the place properly...

The first village baker I met up with still used the wooden trough which he reckoned made his bread special as it had its own micro environment - though that's not the way he put it.

Later I was disappointed with local bakers - using a ready mix product - and then found real bread was being made in the big supermarkets...so he might well be happy with not only a regular income but also with the way he will be working.

Fly: that's what Carene said about the supermarkets too.

We're on our third baker in 9 years in our village. Luckily, the one who owns it now makes much better bread than his two predecessors. And he delivers (still), so we are well supplied.

In Saint-Aignan, there were five boulangeries in 2003. Today there are three, and all make good bread. Population 4,000 or so. I'm not really thrilled with the bread at SuperU and Intermarché, our local supermarkets.

Ken: I agree - our local SuperU and Intermarché bread is not a patch on the local boulangeries. Apparently the Leclerc in Le Blanc is a proper boulangerie though.