The Permeate Hits the Fan

I was first alerted to the gathering storm about permeate by my friend Louisa. She is an American who has lived most of her life in France, but she is, not to put too fine a point on it, a bit of a hippy. As such she is interested in matters of nutrition and the evils of modern food processing, and sent me an article about a substance which, at that stage, hardly anyone had heard of, but the first rumblings of a controversy were starting in Australia and the global nutrition emailing lists. 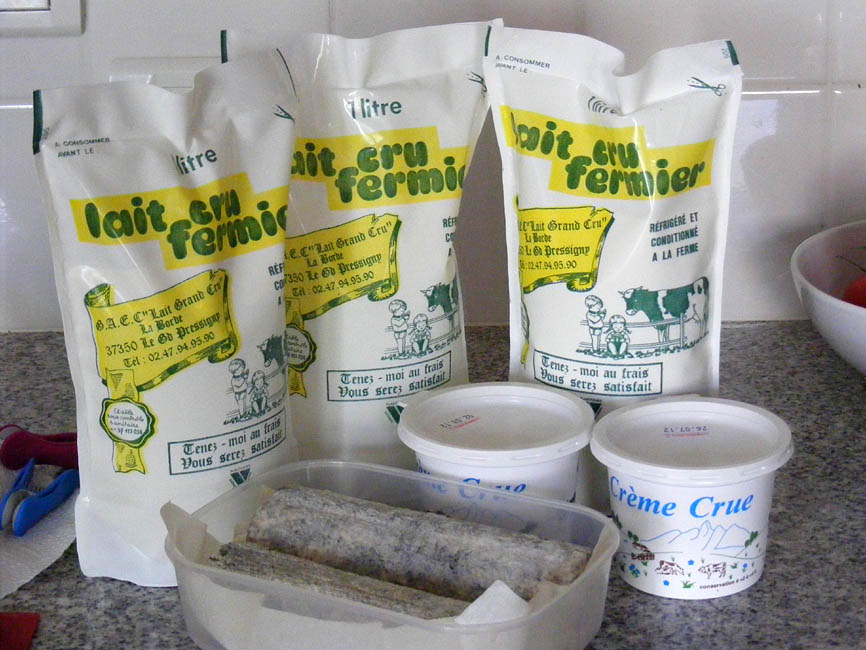 I have long had reservations about fat reduced and homogenised milk, as I believe there is evidence to suggest that there are issues with the smaller size of homogenised fat globules in milk. This means that instead of big fat globules that mostly get passed straight through your digestive system, it seems that the fat from homogenised milk may be easier to absorb. Conversely, to absorb the calcium from milk the fat content has to be right, and reduced fat milk doesn't contain enough fat to allow you to benefit from the calcium.

The sort of thing most people here buy - UHT
and referred to in our house as 'emergency milk'. 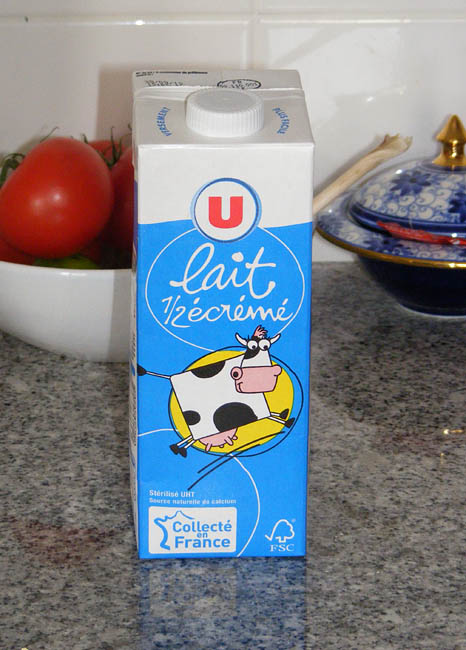 Milk from the farm is routinely deconstructed by the milk processing plants and reconstructed to create standardised products. The milk is filtered through finer and finer mesh to first extract the fat, then the protein and finally, the sugars and water (or permeate). Until recently the permeate was a waste product, sold off as animal feed to pig producers. But in Australia it has been permitted to include up to 16% permeate in milk without noting it on the label. The view is that it is a natural component of the milk so there isn't a problem. However, the end result has a higher water and sugar content than milk would naturally - it's just a bulking agent, and a way of discreetly dumping waste. Probably it makes no difference to the average consumer, but I wonder how many lactose intolerants the higher dose of milk sugar has created. The irony now is that several Australian milk processors are trumpeting their plan to produce permeate free milk - but it will be more expensive (presumably because of the requirement to dispose of the permeate in some other way).

Luckily, here in France, I have access to raw whole unhomogenised milk that is delivered to me twice a week by the farmer herself. We don't consume huge amounts of milk - about 3 litres a week. Until I mentioned this consumption level to various friends and family, I thought this was quite a lot of milk, but I am astounded by how much milk the tea drinking Brits get through! Still, I imagine we consume more milk than French couples of our age. We have milk in a cup of coffee and some cereal most days, and regular doses of homemade custard. Lots of French people think of milk solely as something you make riz au lait (rice pudding) with, and would feel distinctly queasy at the thought of drinking it, even in coffee. That's why French households habitually buy UHT milk - the slightly caramelised taste is perfect for puddings, and it just becomes a store cupboard ingredient, like cans of tomatoes (and in French homes, instant mashed potato flakes, but that's another story).

My laitiere (milk woman) tells me that she has less and less demand for the raw milk, but she isn't planning to cease offering it. The few French people who buy it are mainly elderly and don't shop much at supermarkets so they don't have access to the UHT milk. Their solution is to buy the raw milk and immediately boil it. We, on the other hand, recklessly, and with no regard for the myriad of possible diseases and bacteria, consume it straight from the plastic bag.

When my uncle had the farm I used to drink gallons of raw milk from the bulk tank.... I'm still alive I think!!! We now use the UHT for the convenience.

interesting! Didn't know anything about permeates, the size of fat globules/take up and milk [food for thought there].

Always bought lait cru in NL where you can buy it in supermarkets, Niall simply preferred it. We have UHT--referred to as 'stinky milk' in our house as back up but ye old semi-skimmed fresh for regular use.

We are not fans of UHT but keep some in. At home we drink the fresh filtered (and hence uber processed milk) by the gallon, especially if Tom is at home! This is a bit of an exaggeration although the 4 litres or so that Tim and I would drink in a week more than doubles!

We buy it in 2-3 litre cartons from the supermarket. Until about 5 years ago we had a milkman deliver pints in bottles to the doorstep.

Not certain I like te idea of the permate though.

P.S. We are fans of semi skimmed. If I can smell the milk in my tea I can't drink it!

Maybe Simon remembers in primary school in Australia (well in Victoria) we had small bottles of milk delivered for the students to drink at morning recess.
Regardless of the temperature we had our milk with real cream floating on top.
We seemed to have survived, didn't we Simon......

My Mum used to have a few jersey cows, I was brought up on jersey milk straight from the cow, I do not seem to have suffered from it. I hate UHT but it is in the house in case of emergency. I still drink a lot of fresh filtered milk direct from the supermarket nowadays. Diane

C&E and Diane: yep, we always had dairy cows and I grew up on raw milk. Even in those days people understood that the hygiene in dairies had to be strict. However, there is always the possibility of salmonella or TB creeping through if you are unlucky. Since I don't have small children and am not pregnant I don't worry about it for myself though.

L&S: I remember the school milk in Victoria. It was disgusting, and it's a wonder anyone exposed to it touchs milk afterwards. Of course, for most of us at our little rural school it was a complete waste, as we all lived on farms with a house cow.

Gaynor: I buy UHT in the semi-skimmed form. I don't think the cream takes well to being sterilised and the semi tastes better.

Thank you. You can't mention raw milk here in the US without people having the vapors and shrieking. I try to get, at least, organic non-additive milk where the cows haven't been injected with bovine growth hormone (no one has answered to my satisfaction what that does to humans over time). I didn't know about the smller size of fat globules, but it makes sense.

I grew up on raw milk - it was delivered to us every day. Well there ware 5 kids and the parents - milk went into everything: morning oatmeal, tea ( breakfast and afternoon), and hot chocos in the evenings when we were doing homework.

As far as calcium in low fat milk these days, some companies are selling it with added calcium and vitamin D in Canada. Now I know why!!!

>>I am astounded by how much milk the tea drinking Brits get through!<<

I suppose I would easily get through 4-5 litres a week just by myself (semi-skimmed, and can't abide UHT/homogenised): but I'm hoping I make up any deficiencies elsewhere in the diet.

One experience you won't have had in Australia is the milk (whether the daily doorstep delivery or in the morning school break) "exploding" from the top of the bottle after having been left out on a frosty morning!

My parents used to give the top of the milk to the cat! And it wasn't even our cat, it came round from a neighbour. Long live La Borde lait cru fermier!

Emm: homogenising milk requires the fat globules to be broken up into smaller globules that will stay dispersed in the milk rather than rise to the top like the natural large ones do.

Auty: no, just the opposite, of it going sour after being left in the sun.