The clipped box bushes on our front courtyard came through the cold winter variously. Some look completely unscathed, but two were à-peu-près mort, as our neighbour Edouard noted. He said they weren't quite dead, but I needed to prune them hard, back to where the new shoots were coming underneath. I forgot to take before photos, but basically all the visible leaves were yellowy brown and the bushes were the same size as the green ones. 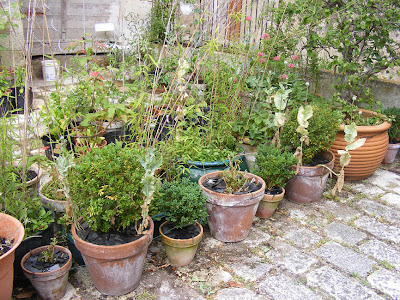 Hey ho - 10 plus years of growth into a ball about a foot in diameter, down the drain in minutes. I don't suppose it will take more than a couple of years for them to catch up again though. After all, they now have very little top growth and a substantial root system. I've fertilized and will try to keep the water up to them (one thing this weather will help with...) 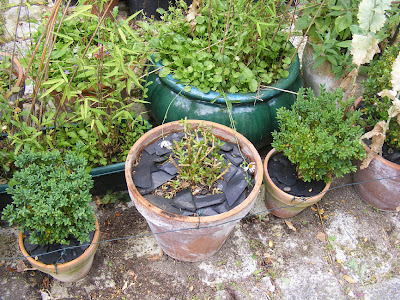 I'm also having a lot of trouble with ant colonies moving in to the bigger pots. They really cause the plant to slow down, and then start to die off, I guess because they are disturbing the roots constantly. It's not obvious that they have moved in until the plant starts looking sickly. I'm trying to keep the soil too moist for them, but I don't think it's working (I'm not consistent enough).

Have had exactly the same problem with ants .

On days when you are not watering or it is not raining , put a mixture of 50% /50% of borax and icing sugar in a little container ( like a bottle cap) in each pot to get rid of the ant colonies.

I ws going to suggest Borax, or baking soda. The Borax and sugar water in a container is good in the house, too.

I think once this weather pattern stops - which admittedly could be months - the ants will stop seeing the pots as high, well drained land. I know about borax, but have always found it difficult to get. Point Vert may sell it, and Simon says I can mail order it - but I'm not sure I want a kilo of the stuff.

I've decided to go with the option of bicarb and icing sugar. Supposedly the bicarb reacts with the formic acid and the ants explode. I'm not sure I believe it, but we'll see what happens after a few days. I'm quite liking watching the ants...