In last year's drought some species of butterfly did poorly, but many of the forest dwelling species did exceptionally well. The shade provided by the trees seems to have helped reduce the impact of the lack of water on the habitat. This year, however, with the cold and damp, they are not doing nearly so well, so you might be lucky to see an Emperor Apatura spp or one of the white Admirals Limenitis spp.

One of the loveliest of the arboreal species is the Lesser Purple Emperor Apatura ilia (or le Petit Mars changeant in French). The males of this large (in European terms) butterfly are a gorgeous irridescent purply blue on their upper sides. Generally they are not all that common, but will often visit gardens in areas with suitable damp woodland (I have seen them at Villandry, for instance). Their main caterpillar host plants are poplars (including aspen), willows and occasionally alder. Their numbers are threatened by modern forestry practices, which clear out all non-commercial tree species (such as aspen and willows).

This photo, taken at la Châtonnière, is not perfect, but I
like the way it shows the butterfly's yellow tongue. 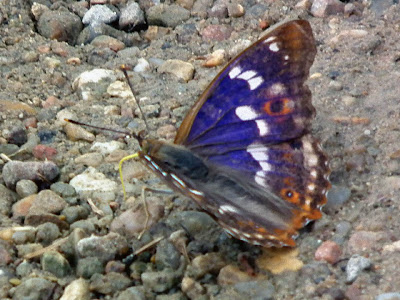 Males are most often seen, because they descend from the treetops to suck moisture and minerals from damp patches on the ground. They are famously attracted to faeces and entomologists studying them regularly lay the most disgusting baits to lure them close. Females are less frequently seen because they are not so easily tricked into coming down to earth.

Susan, we get them here from time to time... but I've never had to "widdle" on the ground to attract them... it is probably the proximity of the water!

But, in my "youf" I did see a huge cloud of mixed butterflies descend on the spot where a horse had just pee'd... a sight that will remain in my memory. The butterflies that is... there were hundreds... but I can't remember all the different ones!
Tim

We got Black and white here...but the rain has banish them