A Dent in the Plans

If you read other French based bloggers, or indeed live in France (or the rest of the world) you will know that the weather this year has been crazy. The way this has manifested itself in Preuilly sur Claise is as a pattern of a couple of wet, chilly days, followed by the weather clearing up.

Sunset last week. This blog post is illustrated
with pictures not connected with the story. 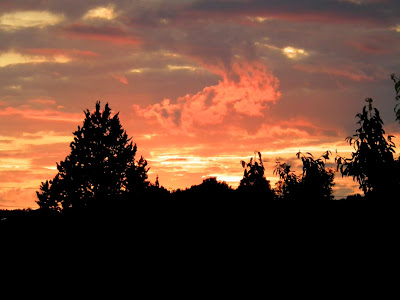 This has played havoc with my sinuses, and for much of the past six weeks I have had pain of the face, mainly around the jaw. (This quite common with serious sinus cases - a dentist friend of mine once told me that about 10% of people who visited him at certain times of the year didn't have bad teeth, they had a sinus infection). Then one morning, I did have bad teeth - overnight I had clenched my jaw and gritted my teeth so hard (to make the pain go away) that I had cracked a tooth. This is seriously bad news, because I have a fear of dentists. It isn't a phobia - it's reasonable - and they are expensive.

I have had to just put up with the pain for 2 weeks because we have been working so much - no sick days for self employed people, dontcha know. Eludril pro anaesthetic mouthwash and RhinAdvil used in combination with the occasional panadol usually managing to keep the pain at a bearable level, but it wasn't much fun and there were one or two sleepless nights.

The Chateau of Cheverny, looking
like Moulinsart (Marlinspike Hall) 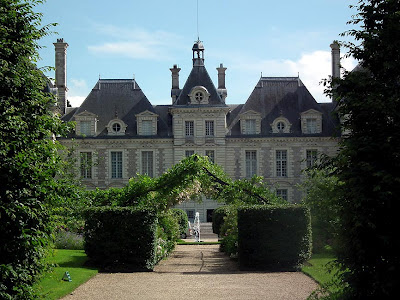 Yesterday we managed to contact a dentist in La Roche Posay (the dentist in Preuilly being on holiday this week) and made an appointment for Thursday at 15.30. Half an hour later the dentist rang back and said "I can see you in an hour". This was both good and bad news, because I knew things would get a whole lot worse before they got better.

Well blow me down... Half an hour after arriving the chunk of broken tooth was removed, a filling was in place, and we were out the door. Did I impress myself with my bravery? You bet - I even managed it all without anaesthetic. Me - having my teeth drilled without at least 3 jabs! 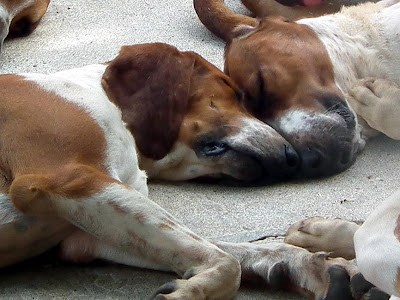 I am told that I will get occasional reminders of the pain for a few days yet as the nerves settle down, but so far so good.

The other amazing thing is that the whole proceedure cost me €28.92, of which we should get about half back from our health insurance.

God play on the words. Hope the pain doesn't come back.

What caused you to NOT have a jab... the cost, or numbness due to the shock of speed of appointment!!?
I can sympathise with you on the sinuses... I get two sorts of severe sinus pain... both allergy based. It really does feel as if your teeth all want to fall out at once.
The first I can do nothing about but use asprin and keep in the dark... it is caused by artificial maturing agents in cheese.
The second is a result of tree pollen... and in that case a "Miner's Pastille" actually works wonders... releasing the pressure of the build up of fluid... usually a couple of paper towels worth... no wonder it hurts. The pressure caused by that fluid must be enormous.
I can think that the only difference between the two is that the cheese allergy ingredient causes the tissues of the sinus to swell, but the birch pollen allergy causes the fluid to build up too rapidly for the un-mentholated glands to release properly... once they feel the vapour they go "Aaaaaah!" and drown my face!
Keepwell Simon,
Tim [not PG]

I've been having allergy symptoms off and on for the past few months too. About dentists, they don't charge very high prices here, and their fees are partially reimbursed by the Sécu. So it's worth it to take advantage of their services.

Tim, are you sure about the cheese? Stop eating it! It can't be all cheeses. Artificial agents? What's that about?

We've been suffer bloody hot day here in Bali...when I was young it was rainy day on july

The climate has change extremely ...that was for what we have done to the eart

Glad to read that you've managed to have the work done and thave survived the ordeal.
At that price I think I'll have my work done in France. At our dentist we pay nearly £80 for a check up and 5 minutes with the hygeinist!

Not surprisingly our dentist has a very nice car and takes many exotic holidays!! Still, I'm not sure I'd want his job, even if I could charge a small fortune.

Gayneor - what's more, you can ring and get an appointment the same year...

Tim - jab wasn't offered - I was told to put my hand up of it hurt, and as it didn't hurt that much I only put my hand up once - and that was because the air blower was cold.

chm - double language punning. It's what I do...

luv the dog pic. can you tell us where you got it?