The dining room and its associated corridor at Cheverny is most famous for its painted decorative panels illustrating the story of Don Quixote, all done by a single artist from Blois, Jean Mosnier, working between 1624 and 1630. Earlier this year we came across an artist refreshing some of the more light damaged panels on the corridor window shutters. 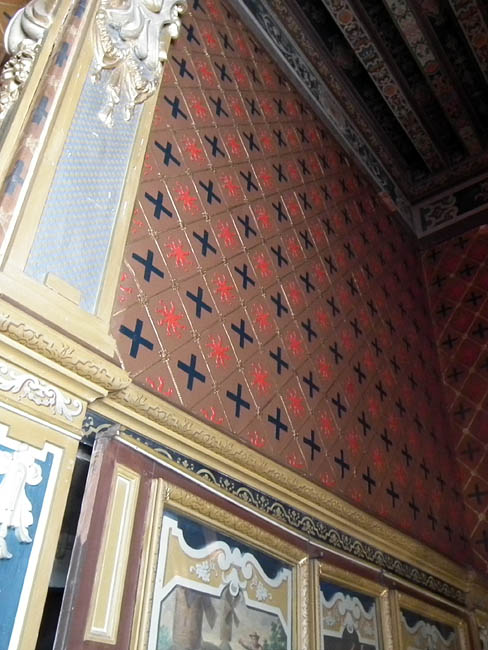 What perhaps many people don't notice (or at least, don't recognise for what it is) is the Cordovan (aka Cordoba) leather wall coverings that are fixed between the ceiling and the painted panels. It too has become torn, fragile and damaged in places and a few weeks ago we encountered one of the house maintenance men putting up a brand new section, and carefully supporting and reapplying some of the old leather.

The old leather rolled up for storage. 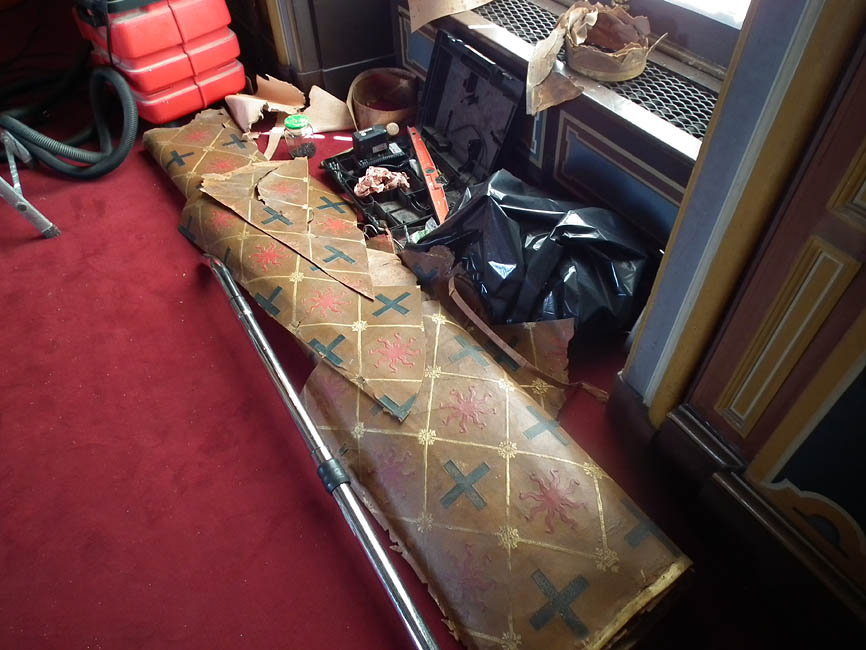 Cordoba leather wall covering was the height of fashion in the days before wallpaper and even before the fashion for silk damask. It has the advantage of being quite robust, and the embossed and painted Cordoba style is easily as decorative as any textile wall treatment. Later, in the 19th century, the early wallpapers like anaglypta would try to emulate the richly textured medieval and renaissance Spanish leather.

Cordoba leather is crimped, modelled or embossed by pressing the wet leather on to a hot bronze or wooden plate with the pattern engraved into it, or by working the leather from both the back and the front with a punch or spatula. Then the piece is gilded or silvered, painted and the background usually stained red or red-brown. I read something that indicated that the leather used for walls comes from horse skin, but I haven't been able to confirm it. The Cordovan origin of the technique led to the distinction between cordwainers (shoemakers using fine new materials) and cobblers (repairers of humbler footwear, reusing materials).

I bet not many people will even notice there is a new piece. 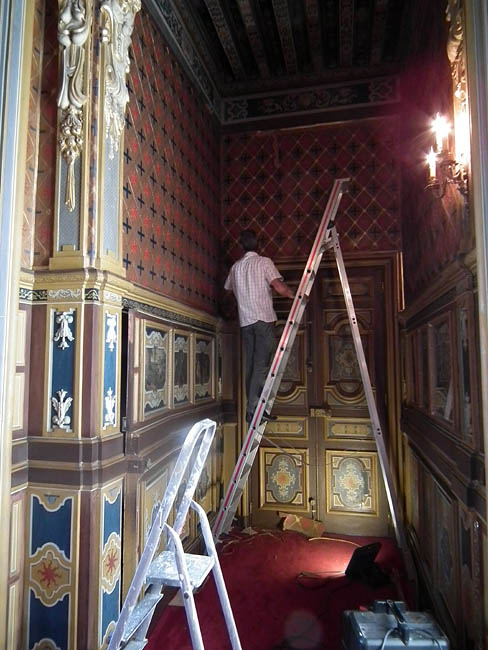 I asked the man installing it where the reproduction piece had been made. He told me it was not Spanish but had come from Normandy. Apparently, after the expulsion of the Moors from Spain (which ultimately led to the expulsion of anyone not of Spanish Christian background), Normandy and Flanders absorbed many refugees and became one of the centres of the artform, and there are still a few highly skilled workshops operating there today, as well as in Spain and in North Africa. This atelier has a rather good blog with fabulous pictures. This company has done work for Cheverny in the past, but they are based in Paris.

The realisation that Cordoba leather was not just made in Spain and north Africa, and is much more of a generic name for a style of leatherworking than an indication of geographic origin has made me wonder now whether the original leather wall covering at Cheverny was made in France or Spain. I will have to ask the head house steward next time we are there - he knows everything there is to know about the house.

Susan,
You need cash for a sister for La Grande Dame... not everyone blogs... have you thought about approaching a publisher with a collection of your entries on the varicose chateaux... entries like this are exceptionally interesting and full of information that I and probibably thousands of others don't know.... and if they don't blog your blog they jamais won't!

A sort of "Hidden Secrets of the Chateaux" was what I have in mind...
Tim in the biblio... not PG

Another fascinating post, which I
read early this morning, but did
not have time to comment. The
Lutson Goudleder site does indeed
have some stunning photos. They
also have a rather intriguing
blogroll I see, but I decided not
to take more than one peek --
time has a way of evaporating.
Can't figure out where they are
located though. Thanks for taking
the time to post all that. Never
seen such beautiful leatherwork.

PG: all the stuff we blog about is out there from other sources if you are interested, and I know plenty of people who are much better qualified to write about things like this. I doubt a publisher would be interested or if it would make much money. The market for this sort of thing is very limited so it's a lot of work for not much reward.

Sheila: LG are based in Gers, Midi-Pyrenées.

fascinating information, thanks. Adding the chateau to my growing list of Places To See.

I took part in a brilliant course with the expert leather restorer Theo Sturge in Northampton a few years back. I wanted to learn the technique of applying silver leaf onto leather for a screen I was making at the time, a photo can be seen on my website www.suelowday.co.uk. Theo has worked on numerous restoration projects involving leather walls and is a very interesting person to talk to on the subject.