When Célestine first came into our life, her windscreen wipers were both humourously vague and vaguely humourous.

When started they would wave like an unsophisticated two year old, wimbley wombley flapping rather than gliding, until they either clashed and locked together, or the right hand one wandered off the windscreen altogether and got caught on the windscreen surround. An added "bonus" of this behaviour was that the passenger only had a partially clear screen. 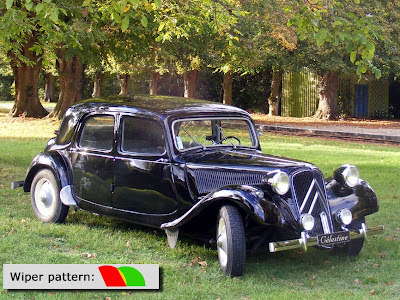 I had various attempts over the next couple of years to modify this behaviour by moving the resting place of the passenger's side wiper, but no matter where I moved it to it would eventually run off screen and catch. Then earlier this year I realised that I could use the manual wiper control knob to, if nothing else, move the driver's side wiper to the end of its travel so when not in use the wiper wasn't in front of me the whole time.

This had an added bonus of the wipers not clashing as soon as I started them - for some reason the driver's side wiper wouldn't start until after the passenger's, and they would just mash horribly. 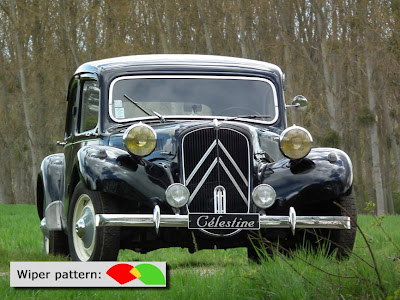 As this didn't stop the wipers clashing, in May I asked The Doctor about how the wipers should be. I had seen other cars where the wipers lay flat at the bottom of the windscreen, but I just couldn't get Célestine's to do that - the wiper arms were the wrong shape. Jean-Louis just removed one arm, bent it to the required shape, and voila - fixed. 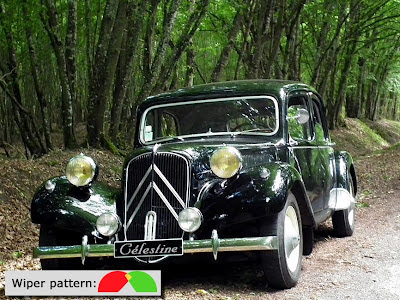 Now the wipers actually wipe the parts of the windscreen we look through, they aren't in front of our faces the whole time, there is no danger of them clashing or running off screen, and the little part of the windscreen that doesnt get wiped is hidden by the rear vision mirror. They also look more purposeful, and don't appear just to flap at the rain.

Celestine looks like she's winking in the April picture!

Solving a nagging old problem is always so much more satisfying than fixing something right away. Just like not cleaning until your house really needs it, instead of keeping up day by day.

Carolyn: not cleaning is standard housekeeping practice with me. I don't know how my mother managed it.

Janet: Thanks. We've been fairly lucky weather wise this year - many days it's so localised you have to be in the 'right' place at the right time to rained on.