A Pair of Sèvres Vases

The Sèvres porcelain factory was established in the mid 18th century. From the first Louis XV and Madame de Pompadour took an interest in the business and more particularly, in their output.

A Sèvres vase at Cheverny... 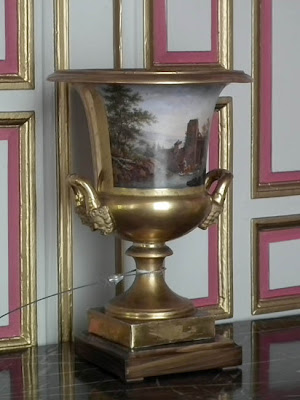 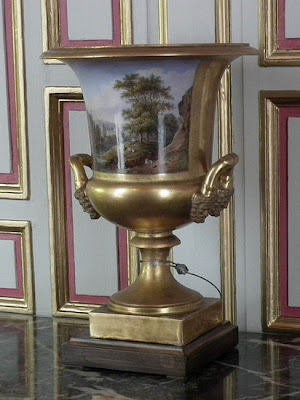 Like the Gobelins tapestry factory, the money eventually ran out and it was only the appointment of a brilliant director in the mid 19th century that saved the porcelain factory. Nowadays, like Gobelins, it is part of the Manufacture nationale, state owned and providing professional training for young artists as well as conservation and curatorial services for the many collectors and museums world wide.

If you are interested in learning a bit more about Sèvres porcelain, I found quite a good article in the Auction Central News here. There are some nice photos of a range of Sèvres attached to the article.

Note that I resisted the temptation to call this post Deux Sevres Vases, on the grounds that it would be too confusing. The département of Deux-Sevres is so called because it lies between two rivers called the Sevres and has nothing to do with the porcelain.
Posted by Susan at 09:00

"Nowadays, like Gobelins, it is part of the Manufacture nationale, state owned and providing professional training for young artists as well as conservation and curatorial services for the many collectors and museums world wide."

Now, why doesn't the UK Gov. do this, instead of letting things go under and fail, or get bought up by other companies so that they can use the name on their "Tat!"

Merci, M.Proust. Although as Grauniad readers we are excused typos

Oh how I agree with Ron Ron

chm: I know, but I couldn't be bothered getting technical at 7am this morning.

Ron Ron & Anon: I think the MN is a wonderful institution, but it does smack of soviet style heritage conservation to me. In the UK the government relies heavily on the NT and the V&A to provide this sort of service. However, until recently, the NT didn't see their role like that at all (with the exception of the Blickling Textile Studio).

Those are lovely vases, and what a sad commentary on our world that they have to be wired down against unauthorized departure.

Emm: yes, they are in a rather vulnerable position. It would be all to easy to grab them and throw them out the window to an accomplice if you were bold enough. Dunno how you would then leg it out the gate, but it's amazing what people manage to steal. It's a shame to have visible security and a shame the wire is damaging the vases. However, one of the amazing things about French heritage sites is how rare visible security is and how often you can get within inches of precious objects that are not behind barriers or wired down.