Although this large (in European terms) and showy butterfly is called the Scarce Swallowtail in English, as anyone who observes Lepidoptera in France should be able to tell you, it isn't scarce at all (except maybe this year, which is poor for many butterflies). Its English name reflects its English status, that of an occasional migrant, turning up in Britain only about a dozen times in the last 300 years. 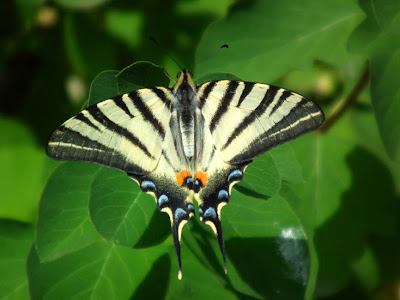 In France it is le Flambé ('the Singed') due to its pattern of charcoal stripes, as if it has had a flame passed over it. They appear in gardens in the spring, but it is the second generation, emerging in July, that is most noticeable in lowland central France. This one was photographed in Elsie's garden in Chinon last July. The caterpillar was photographed in le Petit Pressigny, in the garden of some friends. It was traversing the gravel to find somewhere to pupate in the leaf litter, where it would overwinter. The September caterpillars are browner in colour to provide better camouflage. Earlier in the year, when they pupate in the fruit tree host plant, they stay green. 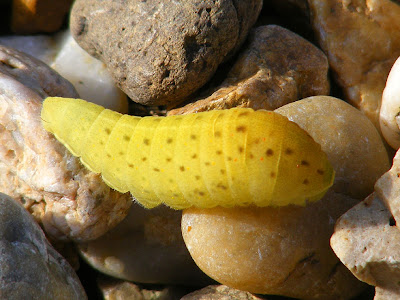 It is often seen in organically managed orchards and gardens, as it will use a number of cultivated fruit tree species and their wild counterparts as caterpillar food plants. They like warm open slopes dotted with bushes, where they will glide from nectar source to nectar source, or engage in 'hill-topping'.

We have some beautiful species here in Indonesia...

Such an exotic-looking thing. Beautiful!

Well,I've been on your site for
15 mins or so following all the
links. Hill topping reference
led to reading about Wolbacchia
(sp?). Always in awe of biologists
who study phenomena such as this
so extensively. Would love to meet
Elsie, as I remember thinking the
first time I read about her.
first tim

We usually have masses of them but I have not seen a single one this year, not even on the lavender! Wishing you both a good weekend. Diane

I don't know how the butterflies are faring with the weather we have in the UK at present!