Snakes on the Plain

After several conversations, both online and face to face, about snakes in the Loire Valley just recently I feel it is time to write about them again. I quite like snakes, but they make many people nervous. This is presumably based on the fact that, globally, many snakes are venomous. 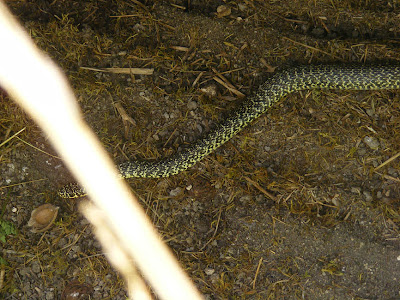 I am here to reassure you about the Loire Valley snakes. Those signs at Montpoupon that say 'Danger vipères'? - wishful thinking. Your French neighbours who warned you about les vipères in your very first week staying in the Loire? - they may have lived here all their lives, but they don't know any more about snakes than you do.

Detail of the back of a Western Whip Snake
(brought to an outing by Marc Fleury). 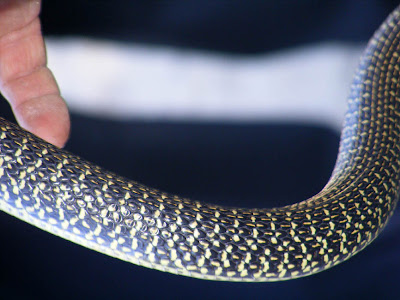 The Adder Vipera berus (aka Common Viper or la Vipère péliade) is extinct in the Loire Valley, although it occurs to the north of us and in the mountains. The only venomous snake in the area is the Asp Viper V. aspis (la Vipère aspic). They are uncommon and rarely seen, and they don't waste their venom on defense unless desperate. I've never seen one. If you see a small (less than 50cm) brown snake with a pattern of offset black bands or zigzags, it might be an Asp Viper, but it is far more likely to be a young Viperine Snake Natrix maura (la Couleuvre vipérine). Natrix spp (les Couleuvres) are grass snakes, and as such, non-venomous.

Marc drawing our attention to the round pupil (venomous species
in France have vertical slit shaped pupils). 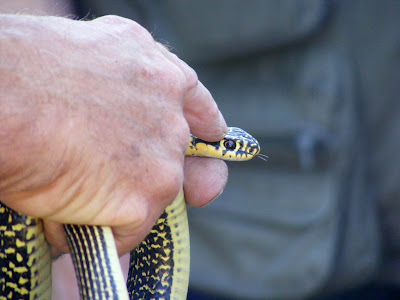 If you see a snake at all here (most people rarely or never do) 9 times out of 10 it will be a Western Whip Snake Hierophis viridiflavus (la couleuvre verte et jaune). I've seen very young ones several times in the streets of Preuilly, and we've had one in the house. We also have at least one adult resident in the orchard.

Close up of the head. 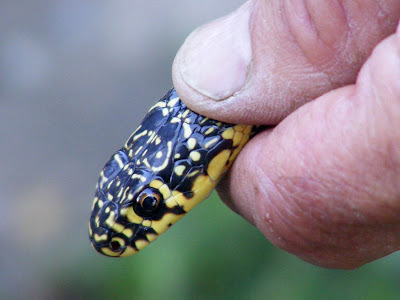 Western Whip Snakes often put on a fine show of agression, but they are effectively non-venomous, like the rest of the grass snakes. Your dogs, cats and small children are not at risk except from a bit of a fright.

The belly, showing the cloacal slit and the junction between body and tail. 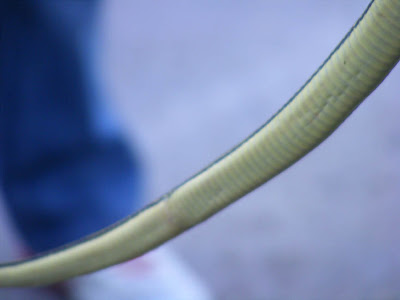 By all means email me if you have seen a snake and want to know what it was, but don't expect me to believe you about how long and thick it was. Those of us who work in the field know that most people over estimate the size of creatures they see in the wild by about 3 times. This is so common a human error that even experienced naturalists find themselves doing it sometimes. I probably won't be able to identify your snake from just a description either. If you have a photo, though, and some details about where and when, I have a reasonable chance and am happy to help.

One of my true music heroes died yesterday. Jon Lord was a founder member and the keyboard player in Deep Purple.

Susan, grass snakes do have a form of defense... two in fact. They will squirt sh-one-t at you from the anal vent [cleans off eventually] or, like the chick of the Manx Shearwater, will regurgitate their stomach contents!
I managed to get rid of the smell of fish from my jacket... eventually. The grass snake vomit never vanished and it bleached the material at that spot too! Oh... and that was the place the first 'decay' in the jacket came about.
So, if you do pick up a grass snake, hold the vent and the head away from you until after it has finished defending itself.
The Manx Shearwater chicks were on Skokholm Island and the grass snake... it was in one of my small mammal traps when surveying.
Tim [from the biblio]

Simon, it was with sadness I heard the news about the great Jon Lord... I was sitting on the bridge listening to "Concerto for Group and Orchestra" just the other day... but that is the start of our next blog entry which will be up shortly.

May the memory of Purple never die and the music live forever!!
Tim [....still in the biblio]

Snakes!! that was how we found your blog many years ago. After taking a photo of a grass snake eating a frog on the etang at Le Louroux whilst on holiday...

I like snakes and thank a National Parks ranger session in Washington DC where, as a kid I was introduced to a King snake for that.
Having said that, I used to run into cottonmouths and rattlers fairly regularly when camping [growing up in the US] and gave them a healthy repect and wide berth! Antoinette

I am glad to find I am not the only person who likes snakes, most people seem to think I am mad! Interesting post Susan and educational. Diane

PG: yes I know - Marc got a dose. Homemade cider makes an effective rinse. I didn't mention it because I was assuming people would not be picking them up, and it may be persistently stinky, but it's not exactly life threatening.

Colin: I was looking at the terrific photo you sent me just the other day.

Antoinette: Of course one gives venomous snakes anywhere and any you are not sure of, a respectful personal space. My point was that here in the Touraine your chances of encountering such a beast are negligibly small. The last person to die from snake bite in the area isn't even within living memory (although there may have been one or two unlucky dogs).

... and cottonmouths and rattlers are in a slightly different league to adders. The whip snake is lovely BTW.

What a waste of cider! An life threatening... definately... my jacket wasn't allowed in the house... it had to live in the coal shed!! No life for a Barbour Thornproof that!!

Tim: LOL. We didn't run out of cider to drink, so it wasn't a problem.

Antoinette: Quite. You and I grew up where there were proper snakes :-)

Coincidentally, I found the rear end of a baby WWS on our front courtyard this morning. Cats I have no doubt. The population of domestic cats in our neighbourhood has more than doubled in the last 6 months with cat free people moving away and cat owners moving in.

Am I alone in admitting that I don't like snakes?

One of my worst experiences as a teacher was when the animal man visited our assembly and picked me out to hold an enormous (and I don't know the sort)snake. Not wanting to frighten any of the kids I smiled and died quietly inside.

Ever since even photographs send me a bit wobbly!!

Gaynor. I am with you. I always get a start when I see a snake. I ain't scared, I just don't like 'em.

However, I don't want you to assume that it stopped me wandering barefoot in Australia...

(having typed that, I think the stupid gene may have been in evidence...)

France is a lot safer than Australia.
Over here we have the mega deadly stuff and we actually do snake handling courses to teach people how to catch them without being bitten.
But our usual advice is,, if in doubt, leave them alone.

Victoria: I'm giving you the benefit of the doubt, but really, your website does not inspire confidence.

pretty animal. no black box for the cloacal slit? you non-Americans. ;-)

Pearl: should I have used that fine Australian colloquialism 'the clacker'?

Yes, our neighbors warned us about vipers when we first moved here. Ha! The only snake I've seen here is short, about 6 to 8 inches long, but of a normal girth, and is uniformly tan in color. I've never seen one like the one in your photos.

Walt: normal girth for a snake that length is about the thickness of a pencil. Is that what you mean? What you saw might therefore not even be a snake, but a legless lizard. Young WWS are also often uniformly brownish on top and creamy yellow below.

Sorry, I wasn't clear! Normal girth for a longer snake, similar to the one you pictured. They're fat, stubby little things. They coil and slither like snakes so I just assumed they were.

Walt: I wasn't clear either - legless lizards are pencil thin. What you saw must be a snake - probably either a young one of a really big snake like the Aesculapian (not venomous) or maybe you really do have Asp Vipers (I would expect one that size to have a black zigzag pattern down the back though). Told you I wouldn't be able to ID from a description alone :-)

Quite late to the conversation, but having worked in the Loire twice for summer seasons there are certainly plenty of snakes around, including the seven living in a shed which held the controls for the swimming pool where I worked in 2011. I returned in the summer of 2013 and there were still about five living there. Luckily, like me, the owners of the property were happy to leave them be, even though I was in and out of the shed three times a day.
I would say they were all adders and I often saw them hunting in the nearby mill race. All sizes from pencil to about a metre in length. They got used to me through the season and stopped retreating from sunbathing on the beams when I went in to check things.

Mick: Adders are extinct in the Touraine Loire Valley. What you describe are almost certainly Viperine snakes (non-venomous, grass snake type). At a metre long they are too long to be Adders or Asp Vipers and if they were hunting in the mill race (in the water) then that pretty much settles the ID. Viperine snakes are often seen in water, adders and asps almost never. Viperine snakes are so called because they have a very Adder (aka Viper) like pattern, and they fool a lot of people.

Susan: Thanks for the answer, I did wonder about the fact that I saw them in the water so often (they stayed under for quite a while), if I go back it will be nice to be able to put a few peoples minds at rest.