On Monday I wrote about our dauphin and how the ice had split it. At that stage the downpipe was full of ice, a slightly worrying situation as the forecast was for rain and anything that fell on the roof would have to find its own way down.

The downpipe on Sunday afternoon 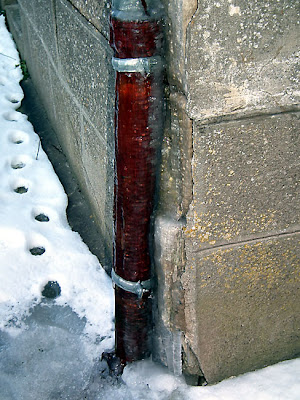 By Monday afternoon the rain hadn't arrived, and the warmer temperatures meant that the downpipe was no longer welded to the wall by ice. This gave me an opportunity to see if I could shift some of the ice out of the pipe.

First move was to shove a screwdriver into the outlet and wriggle, to see if I could shift the lump sitting there. This I managed successfully, but I was rather surprised (and alarmed) when a 9cm (3.5inch) plug of ice then whistled past my unprotected hand. When I looked at where it had come from I could see another lump of ice, which I wriggled with my screwdriver - with the same result.

Realising that this could take all afternoon, I then undid the screws holding the cast iron dauphin to the wall and gently slid it out from the rest of the downpipe, releasing almost 5 metres of ice which shattered as it hit the ground. 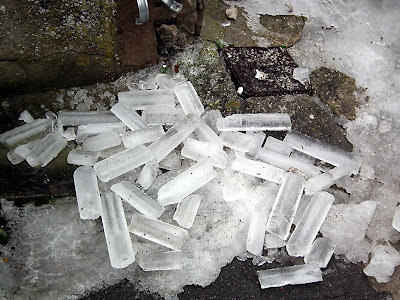 So now we have a clear downpipe for when the rain arrives. It hasn't yet, but one day the forecast has to be right!

No real rain forecast by meteociel for the next five days... so plenty of time to fill the split with plastic metal and strap it up before you put the dolphin back... and look at all the ice you've already got for those "hot summer" drinks. Or you could use it after your Tom Yam soup?

I agree with Tim don't waste the ice get it in the freezer.. What a hot summer talking point "Dauphin Snow Ice" hand crafted by Simon!!!

Tried the new WV system. I agree with Tim. First word was, as he said, was almost illegible, second was too legible for that kind of quiz.

We had rain on Monday and Tuesday. I know because I watched it falling Tues. afternoon, then it stopped... until I went out with the dog and then it rained pretty hard. France 2 weather just said the country will be getting less and less rain over the next few days.

Unfortunately I can't help with word verification - It's a google thing.

All the ice has gone - the tap water here is spa-water, so has to be better than ordinary old rain(or even snow) water.