Yesterday we went to Chateauroux for the afternoon. The route takes us through the Brenne for most of the way so the chances for lucky wildlife sightings are relatively high. I once had to stop the car in the bit that goes through the Foret de Preuilly to allow a haughty young red deer stag to stalk across the road. 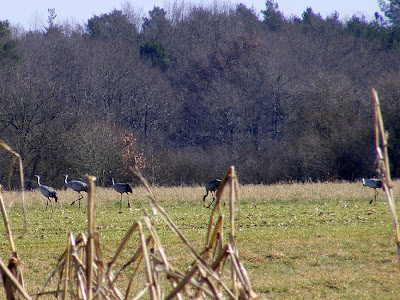 At this time of year we are waiting for the migrating cranes to come over and announce in their honking voices that spring is here. The reports are just starting to come in that they are on the move through France. Every year we see them flying over in strung out Vs but we've never seen them taking a rest and feeding break on the ground - until yesterday. 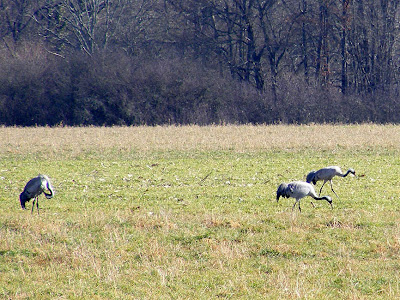 As we drove past a farm between Vendoeuvres and Claise we noticed some feeding in a field. We haven't noticed any over Preuilly yet, so these were our first cranes for the year. We did a quick U-turn and drove up the farm track alongside the field. The dozen birds weren't spooked, but did slowly move away from us and were about 50 - 100 m distant. They look so craneish, doing that thing where their tail sticks out behind like a bustle, and they just slowly stride across the grass in that dignified crane way. 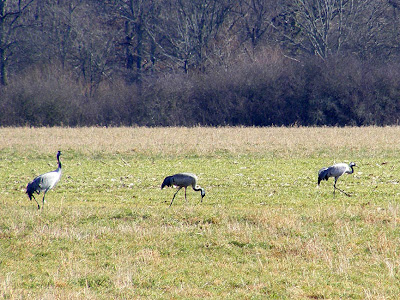 We only had my camera with me, but even so, we are fairly happy with the pictures. Simon decided not to take his camera with us because we were just on a shopping trip. He is kicking himself for missing an opportunity to use his much more powerful zoom. If ever he decides he can't be bothered to take his camera on an outing I am to say 'Cranes!' from now on. 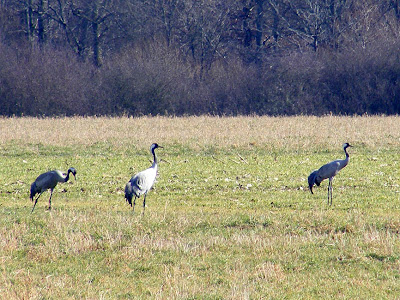 Curiously, this is not the first time we have stopped at this particular farm to photograph something. Last year they were one of a number of farms in the area to grow tobacco and we photographed the crop. It was only a small field, but once again they had provided the unexpected. 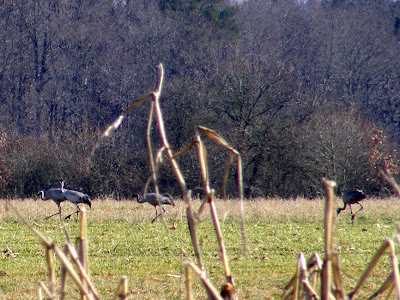 Once we got to Chateauroux we called in on Jean-Louis to see if he'd made any progress with Célestine's gearbox, but as we expected, it's been too cold to work in the garage. He said he'd seen a flock of about 60 cranes, just lifting off near Déol this morning, the first of the season for him too.

Cranes are one of those birds that everyone is happy to see, all over the world and in all cultures. Non-birdwatchers and birders alike will stop to watch them. I guess it's partly because they are large and elegant both on land and in the air, and because they herald the changing seasons. The long migration of many species is widely known and considered heroic, and their balletic mating rituals draw crowds in some countries.

Cranes now breed regularly at Hickling... and other places in Norfolk... if it had been disturbed by that crowd, perhaps they'd never have returned!

WVs are "groula trosqu"... the sound of trumpeting cranes! How apt...

Ooh lucky you and excellent photos by the way [whatever the type of camera].
Know the feeling- you see something good and all you have [in our case anyway] is the one on the mobile phone....

Hoping to catch some shots of flamingos when in the Carmargue in May. Bet Simon was devastated coz you had the camera.
PS Spring is on the way.

The photos are pretty good despite no powerful zoom. Good to know spring is on the way :) Diane

Of course... you were lucky... the crane is considered by many to be a bird of good fortune... my staff have been looking green all morning!

You were seeing about Celestine's gearbox... may the sight of the cranes on the way there bring you good fortune.

The WVs are "yeament Febro"... and it'll soon be Marcho!!

We saw a crane in a field near Montrésor this morning as we were driving to Loches. By the way, the Halles et Champs shop is shut, with a big A Louer sign on the front gate.

Tim: Hickling is a great reserve.

N&A: too bad until recently if my mobile was the only camera we had - we only just bought a cable to download photos for it.

L&S: the flamingoes have been having a tough time of it. In the big freeze their feet were getting chilled and they were dying.

Diane: indeed (although I said that to J-L and he wagged a finger at me and said 'en principe'.

Ron Ron: I had a similar thought.

Ken: thanks for the news of Halle et Champs - a shame.

Nice pictures, even without the zoon. Such amazing birds. They made me think a bit of wild turkeys, but taller.

Cranes are beautiful birds. I don’t think I have ever seen one here in S.C. right on the Pacific flyway. We have lots of other birds like white and brown pelicans, cormorants, several varieties of ducks and gulls, different sorts of egrets and geese, great blue herons and night herons [like the one we saw in the Brenne last year] and oodles of smaller wading birds, song birds and whatever! It is a birder’s paradise, if nothing else!

At least you had a camera with you to capture the cranes, as it wouldn't have been the same without any pics at all ...

Hope the weather warms up so that Celestine can 'take off' again.

Think you're right. Everyone has a soft spot for cranes.