A Bit of Heat

The weather has been on the perishing side of chilly lately, so when we were in Paris I bought some makings for Asian soups from the Paris Store. One of my favorite soups is Tom Yum, the spicy Thai soup, which I first encountered in the early 80s, when Thai food first became trendy (yes, I know, even I was a trend follower once, rather than the trendsetter I am now).

I bought a jar of Tom Yum paste, on which the instructions are a little ambiguous.

Directions:
1. Put 2 spoonfuls of paste in 3 cups of boiling water.
2.Add shrimp and mushroom as required, boiled till cook. 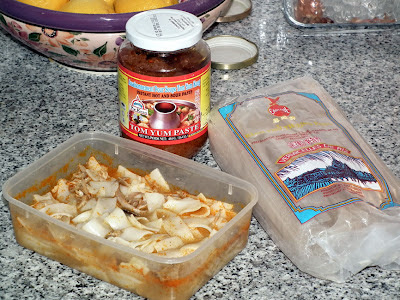 After a discussion with Susan (who thought it must have meant 2 dessertspoons) and sniffing the jar, I decided to start cautiously. I added 1 teaspoon of paste to 2 cups of boiling water, then added rice noodles and some shredded cooked chicken and boiled until the noodles were cooked. This I decanted into a bowl so I could enjoy some yummy warming food.

I am no wimp, but after one mouthful I put the mixture back in the saucepan, added more chicken and two more cups of water and simmered for 5 minutes, adding some extra chicken stock powder.

This made an extremely hot but very tasty soup, and the best part is that I have lunch for today already sorted out and enough soup paste to last me a couple of years!

Yup.... bin there! Our jar is about ten years old [and half full]... I think it refills from the surrounding molecules.
I made my brother a Thai green chicken curry many, many years ago from South East Asian Food by Rosemary Brissenden... now, he likes hot curry [vindaloo, etc], but this brought him out into a hot sweat! It brought us all out into a hot sweat!! The Thais must have cast-iron constitutions... I've just checked... in the dish it used a "handfull" of green chillies and, in the paste, it used seven dried Thai chillies [the little red, very hot b#rst#rds... we grew those, dried them and ground them... we'll never need to grow them again... you just wave the jar around over the dish and the heat therein transfers to the dish. I think that jar absorbs heat from the surrounding atmosphere in Summer.
WV is "do makes t"... which reminds me that tea is brewing in the pot.

Are you sure about keeping explosive materials in your house?