Just out of the oven, made in one of those big paté dishes that
the charcutiers give away once the contents have been sold. 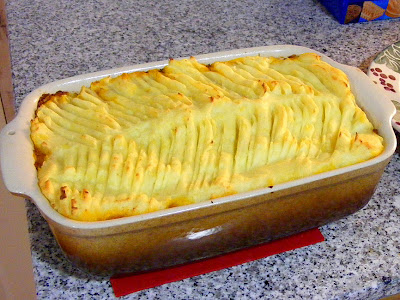 Hachis parmentier is a French family favourite, the equivalent of the anglophone Shepherds Pie. The main differences are that there are often multiples of both the mashed potato and the meat layers. In my version I've made a savoury mince filled mashed potato sandwich, with top and bottom being thick layers of mash, with a thin layer of meat in between. And that's another difference with hachis parmentier - the proportion of meat to potato is often that the potato is far more substantial than the meat. My version uses 1.5 kg of potatoes and only 500 g of meat (with lots of diced and puréed vegetables added) and serves 6.

A healthy dollop of classic comfort food,
and more for the freezer. 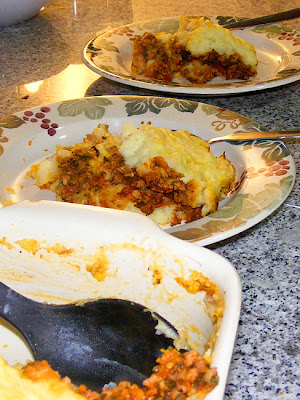 Apparently hachis parmentier entered the French culinary lexicon in the 18th century, and is named in honour of Antoine-Augustin Parmentier, who championed the use of potatoes as cheap, nutritious and filling back in the days when they were still considered unsafe for human consumption in France. Like Shepherds Pie, it is traditionally made from leftover meat (usually a beef stew in the case of parmentier). Any leftover vegetables and gravy are gladly added for colour and flavour. These days it's probably more often made from scratch with purchased raw minced meat. This is certainly what I did, using chair a farci (pork mince, literally 'flesh for stuffing').

Lovely and warming... we had much the same last night... left over Blanket of Duck... excess root veg and topped off with mash... served up with a stir-fryup of cooked rice, peas and...

We'll probably see you today, we are over to the Foire... and having the repas.

Interesting about the terrines. I've never heard of charcutiers giving them away before. I've seen such terrines on sale at SuperU recently for a very reasonable price of 2 or 3 euros though.

More and more, I'm learning that potato flakes to make puree are very popular in France. Not with me.

It's a lot harder to leave comments now with the new word verification thing. Annoying.

Tim: call in if we are not down there. We are not lunching at the fair, and it's garbure tonight :-)

Ken: our charcutier in Preuilly gives them away - maybe it's just them. The supermarkets sell them for €1 or €1.50.

PS Ken: yes, the recipe I based this on suggested flakes as an alternative.

I do a similar dish, with meat topped, with green beans, tomato slices and mash. It's one of those dishes that everybody likes. I call ita 'tranche napolitaine', which as you know is a slice of ice cream with three layers: vanilla, strawberry and pistaccio :)

That looks extremely good. Any chance you'd post the recipe?

Emm: The recipe that I started with isn't online, but basically you make lots of mashed potato and some savoury mince and layer them, then pop in the oven to heat up and brown.

I love shepherd's pie so would love this dish.
The "dish" itself is nice, too - we bought one at a vide grenier for €1 and find it extremely useful.

I'd have written "chair à farcir" instead of "chair a farci". :o)

Anon: I wrote the post on the laptop and the only accent I can do on it without faffing about with character map is é, hence no accent on the a. And it is farci because that is how the meat is labelled (I think - now you've made me wonder, and I don't have any in the freezer to check).