Old and New - in Paris

We have written about the hotel Laumiere before, and return here whenever we are in Paris (with one notable exception).

The hotel is about 50 metres from the metro station Laumiere, which was opened in October 1942. This photo was taken not long after that date and comes from the website I mentioned ten days ago. 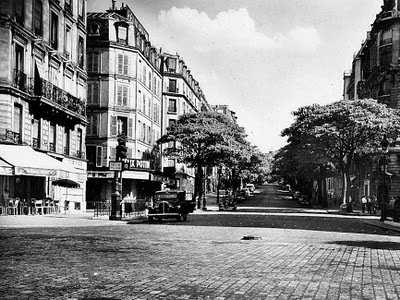 And here it is on Thursday morning- almost 70 years later. I was well wrapped at the time, as the temperature was -7C. I think that may be why you can actually see the road. Usually this is an intersection full of buses, garbage trucks and people on their way to work, but this is the emptiest I have ever seen it during daylight hours. 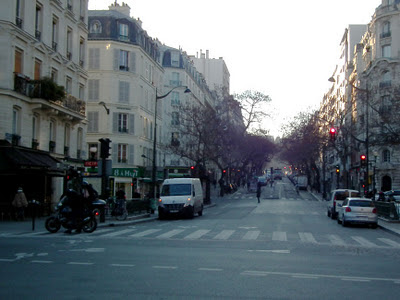 The name refers to the Avenue de Laumière, named after Xavier Jean-Marie Clément Vernhet de Laumière, a general who was killed in the French intervention in Mexico in the 19th century.

The reason I was able to take the second photo is because we have been in Paris, visiting Retromobile. It was a bit chilly up there, never getting about freezing point, and snow on Friday evening. When we arrived home after 4 days we discovered that we had no water - the main stopcock where the eau de ville enters the house had frozen. After an hour of gentle heat from an electric radiator the water returned. Phew!

Paris and Retromobile photos will follow later in the week - at the moment we are trying to get the house warm.

Good luck with getting the house warm... it shouldn't take too long with the new insulation you have... and anyway, you won't want to be going anywhere in this will you?
Hope retromobile was fun... and you haven't spent too much on bits for Celestine.... have you?

Cant wait for Retro Simon - how is Celestine?

Eye candy from the car show will be here soon.

Celestine is still with the Dr, but we hope to hear news soon

I would have thought that the trees would have grown more in 70 years, or is that pretty much full height?
When were the trees planted across Paris?

Andres. The trees in the street now are Pawlonias, so judging by how much they have grown I assume the original trees were removed in the 80s or 90s.