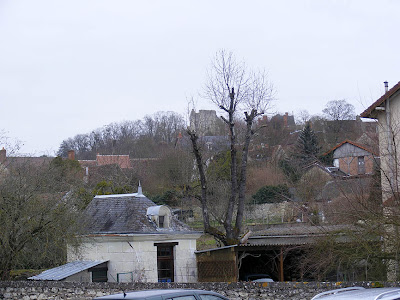 This view across the valley formed by the ruisseau de miloneau was taken by standing in the driveway of the local nursing service (which goes by the not entirely reassuring name of Cactus!). I am looking across our friend Gérard's backyard, with its charming classical garden shed. I don't know if it was once a rather posh dunny or whether it is a vine hut - I should ask him I suppose. It is oddly and abruptly cut off at the back - did it once join on to something bigger behind?

Beyond that, in the middle of the picture is a huge upright old pear tree that produces quantities of sizeable fruit that are just left to drop into the ruisseau and bob downstream in the autumn. At the summit of the hill, seemingly poised on the tips of the pear tree's branches, are the ruins of the Chapelle de Saint Mélaine. Rumour has it that the owners have applied to have it reconsecrated (and here was me thinking it was their garage!).

And that building looks too 'posh' to have been a vine hut... you really must ask about its history and then blog about it... was it the side entrance to a barn?... was it the back door to a large house?... or was it purpose built from 'reclaim' and is, in fact, a folly?
Given the way that property gets divided up in France it could be any of these...