Enough of the cold already!!

Last week we were in Paris at Retromobile, where there were lots of very yummy things to look at. The three cars that really caught my eye were a couple of touring convertibles and an open Bugatti road racing car.

Of those, the one that just transfixed me was the Bugatti. Of course, I took plenty of photos of it, but none that the whole car, which is why I have included a link to someone else's photo. I did take photos of some of the details, including the stopwatches in front of the co-pilot (it would be un-generous to call him anything else). This is a proper le Mans car. 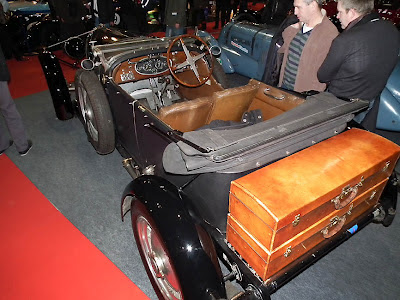 I particularly like the worn away section where
the back seat passenger has been hanging on. 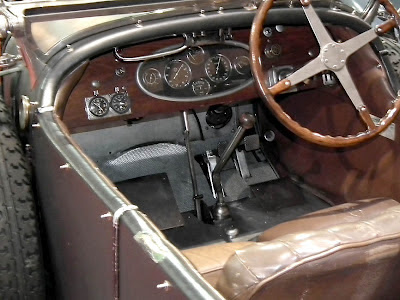 Delahaye 135m from 1938, with bodywork by Henri Chapron.
In the words of whispering Bob: mmmmm nice... 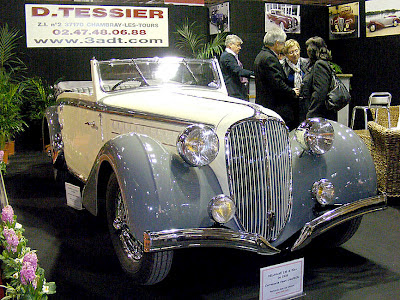 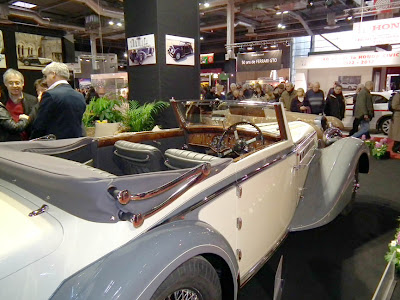 Delage D6 Cabriolet by Guilloré of Paris 1947.
This car is still for sale, with extra pics here 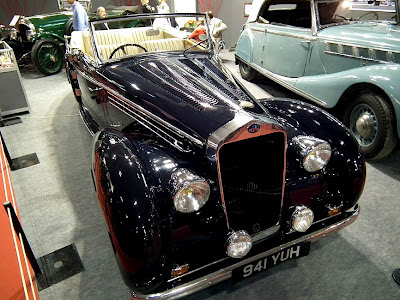 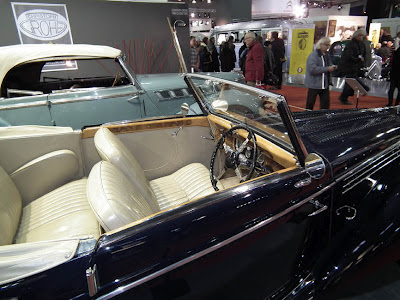 The show was (as usual) really good, but - again, as usual - too long a day. We were contemplating not going this year, but we weakened. Next year we may travel up to Paris in the morning, visit the show in the afternoon, and spend just one night up in the big smoke.

I have loaded more pics onto our facebook page, and will be adding others over the next couple of days. If you want serious car pics (with commentary in French) look here.

Beautiful Stuff Simon. Might get some motoring posts up soon with our own VHRR Phillip Island Festival of Motor Sport and the Melbourne AGP F1 next month.

My favourite of these three is the 1938 Delahaye... lovely. Looking at the last one, there was a nice Light 15 Decap outside Valmer last year... to get one of those for your clients to be shipped around in might be worth acquiring the extra cash? You could also do weddings...

Tim: we don't do weddings because they coincide with peak tourist period. I don't think we'd get sufficient ROI on a decap of any sort, and they have practical (eg security) problems if you are dealing with visiting, paying clients.

I would like a convertible of some sort - but they are at least 3 times the money. A good one will cost from 50k up. You can get houses for les than that...

Leon - eye candy. That's not to say I wouldn't have any one of them.