What a Pointy Nose You Have!

One day in late February I was idly looking out the window and I noticed a dead leaf being blown up the driveway, hither and thither as the wind gusted. But then I looked again - it was a little creature! Not a mouse - the shape and action was all wrong. Was it a small vole I wondered?

It had the most distinctive manner of progressing up the driveway. I can only describe it as looking like the bobble of a knitted hat being blown erratically over the terrain. It didn't bounce or scurry, it bobbled its way along the base of the neighbour's garden wall, with an occasional splash into a puddle, as though it had no control over its movements.

A tiny little thing, less than 10 centimetres from nose to tail tip 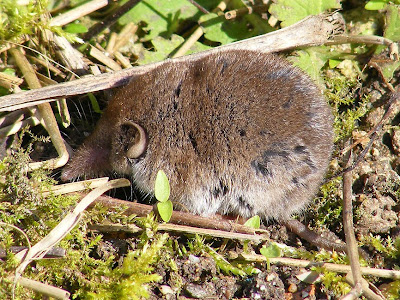 At this stage I ran to get the camera, not holding out much hope it would be anywhere to be found when I returned. But I was in luck, and soon saw it moving again.

Once it got level with the back of the neighbour's garage it changed tactics to cross the driveway into our back garden. For this manoeuvre it opted for a more traditional scurry, keeping its belly close to the ground and taking the shortest straightline route as rapidly as its little legs could pump.

What a long pointy nose! 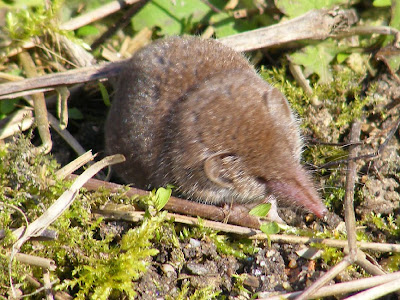 Then it had a bit of a nose around in the moss and dried vegetation, peering under things, climbing gingerly over others. After a few minutes it stopped dead. I thought at first it must have been injured and in shock, but it seems not. It must have known I was there, but the lure of having a rest in the sun was too tempting. It allowed me to come within a couple of metres (I didn't push the relationship any further) and I got my first photos of a live adult shrew. I've seen shrews before, but only baby ones accidentally disturbed in their nests, or dead adults, so I was amazed when this one turned out to be so obliging. 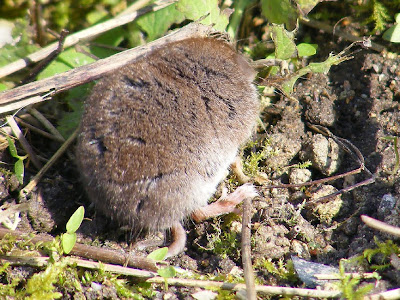 Studying the field guides tells me that it is a White-toothed Shrew Crocidura russula (Musaraigne musette). They are 5-10 cm long, including the 2-5 cm tail. They weigh 6-14g, which for a shrew is quite large, with a fairly long tail. As their name suggests, their teeth are completely white (some shrews have red teeth). Shrews are insectivores, not rodents, and can be distinguished from rodents by their long pointy muzzle and miniscule eyes. The White-toothed Shrew has a pelt that is brownish grey on the back, lightening progressively to white on the belly. They have some long hairs in amongst the thick fur and on the tail, which you can clearly see in the third photo. Of the 10 species in France, this is the one you are most likely to see, because of its willingness to associate with man, and is the species most commonly found inside houses. It lives around houses, in gardens, barns and dry stone walls. It eats insects and worms, so in winter, when food is scarce, they gather together in a nest to keep warm. They can also reduce their body temperature and become torpid for a few hours. They are generally nocturnal, but sometimes active during the day like this one. According to the field guides they are less agile than Pygmy and Common Shrews, and have a shrill cry or make a high pitched soft twittering noise.

What an amazing creature! It looks quite cute but I'm not sure I would feel comfortable having one living in the house :)

What great photos, nothing ever waits for me to get the camera :( Diane

You sure were in luck to be able to portrait this minuscule and lovely creature. Was this the taming of the shrew or was it tamed already?

We've been lucky enough to rescue a few (maybe white, prob common) caught by our felines. The wee shrews are very vocal in defending themselves(huge Ahhh factor). They are put in an old towel in a bucket and left for 1 hr in peace and quiet. If they have recovered they are released in our hedgerow.

CHM: It was an unusually relaxed shrew, but I bet if I had tried to pick it up it wouldn't have been tame :-)

N&A: I did wonder if this one had just had a narrow escape, but it didn't seem to have any injuries and wasn't showing signs of shock (no hyperventilating).