Sometimes Susan and I, completely by coincidence and without consultation, end up doing similar things in different parts of the house.

Take Monday for example: we were both dealing with olives. Susan was taking them out of jars and repacking them with olive oil, chili, wild oregano and Ducros 5 baies. I was doing plumbing. 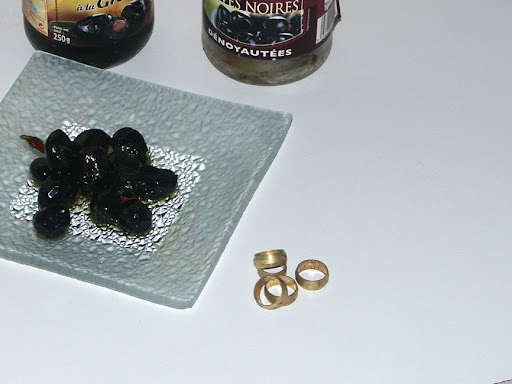 It makes a change from cherries.

And talking of plumbing: I fitted the waste water pipes to the shower base yesterday, after buying quite a few wrong bits of 40 and 50mm plastic piping and using language. It's just as well half the people who live near here are old and wouldn't hear anything over the noise their TVs make, and the other half (including those who speak English) work during the day.

We now have water to the shower, water from the shower, a shower and a water heater. We put the shower cabinet together yesterday after dinner and are waiting for the silycon to set before trying it out, I bought a 25Amp fusible and will be fitting that this afternoon, and then we can have a shower.

Not that I could wait: yesterday was so warm (and I was so glowing) that I put a watering can full of water in the sun for a couple of hours, then before dinner I stood in the back garden in my swimming shorts while Susan poured it over me. I think the neighours were all out...

Plumbing... olives... what am I missing?

Ah, of course they are. What do you do with the pits?

And I'm sure I can guess what they're lubricated with...