A few months ago Aynard de Clermont-Tonnerre, a wine producer from Saint Georges-sur-Cher, got in touch to say that he used to live in Boussay, a small village near Preuilly (so near, in fact, that our verger / potager is technically in the commune of Boussay). He particularly wanted to tell us that hidden in the woods on the edge of Boussay is a Roman theatre. It isn't marked, even on detailed IGN maps, and M. Clermont-Tonnerre says that the structure's stones were removed about a hundred years ago to be re-used in the road – quel dommage... 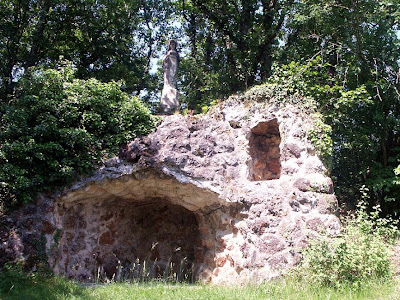 Naturally we were intrigued, and as soon as we had a free morning, we drove out there to investigate. A wide grassy track (known locally as "the Roman lane") through the woodland leads you up the hill and then opens up to a clearing overlooked by the ruins of a chapel and a 19th century statue of Mary. We were delighted to see that the clearing was full of Fragrant Orchids and there were a few Fly Orchids, Lizard Orchids, Common Twayblades and Bee Orchids too. Moving off along the path which runs along the escarpment, we were even more delighted to discover abundant Red Helleborines in flower and White Helleborines in bud but not yet out. 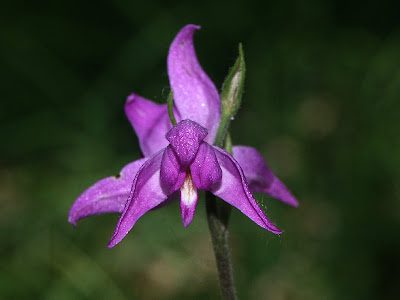 We walked until the path ran out, and identified a shallow depression that may be the site of the theatre, although we can't be certain. M. Clermont-Tonnerre has sent us a couple of maps with the position marked, but even with a map reference and a GPS, once you are on the ground and peering through the vegetation trying to read the landscape, it is difficult to know what is natural and what is archaeology. There are certainly a lot of lumps and bumps in the ground, which suggests a lot of archaeology, but impossible for us to decipher. 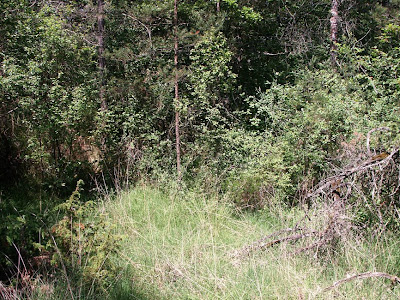 In all we saw 10 species of orchid and had a very pleasant walk on a hot day. M. Clermont-Tonnerre tells us the wood is called le bois aux prêtres because during the Revolution the locals hid refactory priests who refused to change their allegiance from Rome to the French State. 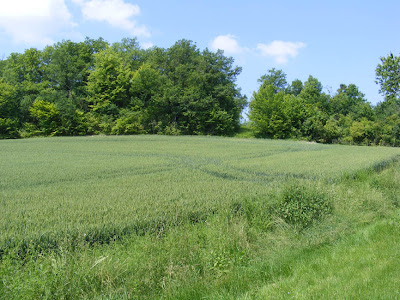 A quick note: my Uncle Geoffrey asked me last night about the ceiling that fell down, and whether I had done anything to cause this to happen. I was able to reassure him that the collapse was not totally unprovoked and he was in no danger of having ceilings fall on him unannounced when he visits, as one end of the ceiling had become detached when I took down the staircase, and my foot slipped occasionally when I was doing the bathroom floor, putting pressure on the other end.

Such goings on! You must never be still. Well, I have a travel/food question. We actually have an awesome opportunity to visit London and Dublin this August for only 6 days. I have never had authentic fish and chips and wonder if you would have any advice/favorites that we pop by when we are in London. We will be staying in an apartment in Kensington? between Holland Park and Kensington Palace. Any ideas?

Jenny: I'm really sorry, but good fish and chips in London is extremely rare. The north-east of England is a better bet, but as a general rule the chips are soggy and greasy even if the battered fish is OK. If you want an authentic London pub experience, with quite good food and proper English ale, I recommend the Angel in St Giles High Street (off Charing Cross Road). I have had good fish and chips at the George Inn, in Borough High Street. This pub is a rare surviving galleried inn and is close to Borough Market, the gourmet food market. Nearest underground station is the London Bridge on the Jubilee Line (take the Borough High Street exit). The beer is good at the George as well.

Thank you so much Susan. I know y'all have a busy schedule these days. We may still try fish and chips because I think anything should be better then the tasteless soggy affair I had at our local Red Lobster (National seafood chain).Cheers!