Susan wrote yesterday about the cherries and our plans for them, and today we finished processing the first 10KG (that's 22lb). That leaves about 30kg (at least) on the trees. Getting to them and then picking them will present a challenge, but not as much of a challenge as using them all.

First of all today I stewed some cherries (about 3kg) with a little sugar to stir into yoghurt or crème fraîche (or maybe even fromage blanc) as the whim takes us. Susan had already put about 1kg of cherries in a jar and topped it up with preserving alcohol so we can do cherry liqueur, which still left a pile of cherries to think about.

I've had a haircut, too. 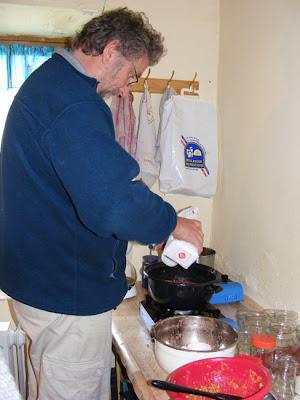 I decided to make jam, and settled on David Lebovitz's "No Recipe Cherry Jam" recipe. The only real variation from the script was that I boiled the fruit and then passed them through a colander rather than pitting them (I don't have a cherry pitter), and as well as adding the juice of two lemons I put two lemon halves in the jam to cook.

Jam (and booze), all cherry flavoured. 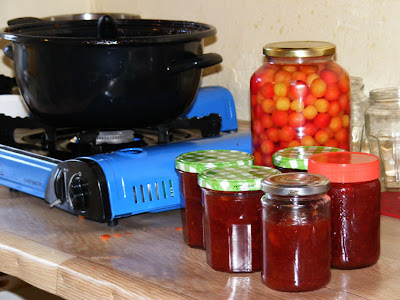 The results are ever so slightly too lemony for my taste, but that zingy tartness does stop the jam being too icky. We had it for breakfast this morning, spead on fresh boule with a little butter and it was good. I mean really good. This was my first ever attempt at jam making, so I am quite pleased with myself. 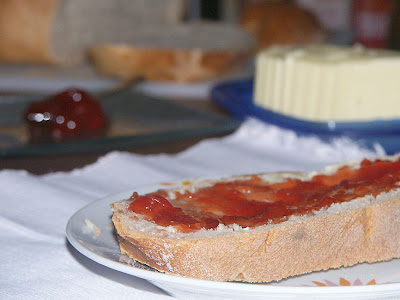 And best of all? There is still 1kg of cherries left - to go into alcohol with sugar and spices. So for now, that's the cherries sorted.

What isn't sorted is our computers. The plan was to put two computers online, so Susan can do work without interrupting the important stuff like blogging and looking up recipes, the cost of floor tiles, how to do plumbing and a million and one other things (watching and/or listening to the cricket, for instance). Our problem is that although I am quite computer literate, I know nothing about networks, and am not well disposed to the thought of learning about it on top of all the other things I am trying to learn.

Note from Susan: Simon told me he didn't have time to sort out our network, so I got in touch with the IT guy at my office in London, and Bob Toovey, who I've come across in the blogosphere, to see if they could help. Bob runs Computing in France, and responded very quickly to my email. After a short email exchange, I then rang him and he spoke to Simon, checked what gear we have, whether we were using the right cables, what type of modem we have and so on. Bob made a few suggestions, including contacting our ISP, which I have followed up, and Robert, my work IT guy sent some useful links, so between them, I am sure we can make it work eventually. Looks like we do need an extra bit of hardware though.
Posted by Simon at 09:00

Hmmm. That cherry jam looks delicious. I can see why you'd rather concentrate on jam than computer networks. Seems confusing to me. We can have as many computers as we want online here at home with our wireless network.

Pauilta - Thanks - the jam is delish :¬) As far as networking computers goes, it's just that it is something I have never bothered with before and will entail buying something new that costs more than we have paid for all of our computers so far... (And I don't trust wireless networks on a security basis - far too many people can't get the security right even when they try, and as I can't be bothered reading about how to set a network up, let alone buying the equipment, what are the chances of me being bothered to read all the dull stuff about security?)

Ah Simon, it was good bye ponytail, then. I like ponytails.
We have a network between 2 computers at home and it works very well. even for a computer dinosaur like me.

How many of your neighbors have computers? Or computers with wireless adapters hooked up to them? If none -- which is our case -- you have no need to fear wireless networks. We keep an eye out to see if anybody might be sitting in a car on the road outside our house using a laptop. That would be our signal that somebody is tapping into our wireless. So far, no sign of anybody. We have four computers on our network and it works fine.

Jean - Amazing, I know - unfortunately I was dozing when Susan told the hairdresser what "I" wanted... At the rate my hair is growing it won't be too long before it's too long.

Ken - I have no idea - I couldn't even make Susan's new laptop look for a network!

OK, Simon, do you have a router? With a router, wired or wireless, you shouldn't have any trouble connecting three or four computers. And routers don't cost much these days.

Wired is better if your physical configuration allows for it. But you need a router. In our house, wireless was our only inexpensive option. Running wires would have been ugly and costly.

I love cherries, and I quite enjoy jam. On the bread they look oh, so good. I would put it on one of the 100 or so things I need to eat before I die.

Wow there is no end to your talents, you are both very very productive..looks delicious.

I looked at you friends blog on computing, unfortunately I cannot read it, not showing properly!!

My husband is an IT consultant for Formula 1 , and your friend is doing just the job I would like my husband to do, live in Europe and do computing!