A couple of weeks ago I went to the Source Saint Marc in Chaumussay to check on the orchids on the hillside there. At the bottom of the hill is a particularly lush potager, and its owner is almost always working in the garden.

I stopped to chat with him and he let me know that there were beaucoup d'orchidées on le Petit Pressigny road. I complimented him on his banana palms and he replied that they had been retarded this year by the very cold winter. According to him it got down to -17°C. I told him about our fears of finding a wine lake in our house after the freeze and he laughed and said that the alcohol content would have protected the wine. Then he proudly pointed out his Red Hot Pokers Kniphofia and told me their French name, Tritoma. These have obviously self-seeded, because there are half a dozen plants on the very steep slope above le Chameau, mingling with the Lizard Orchids, with the springwater below spilling into a small fishpond. 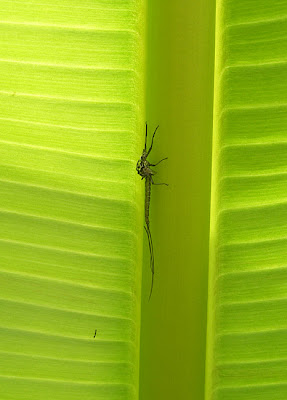 There was a mayfly larval case on the underside of one of the bananas, and quite a few adults of several species resting on the nearby box trees, grasses and Nottingham Catchfly. 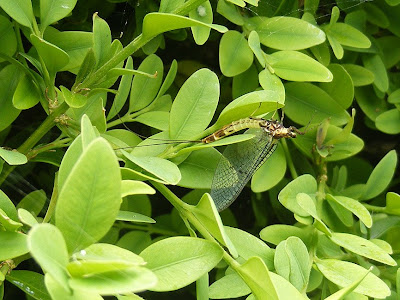 And in today's news: It rained fairly steadily all morning, so I cut the paeony flowers and brought them inside. With the weight of water drained off them they are looking much chirpier and hopefully will last indoors for a good few days.

We called in on Steve Palluel, the new co-owner of the château at La Celle-Guénand and got to see some of the interior. He is hard at work restoring the bedrooms and breakfast room in preparation for receiving paying guests. The bathroom he showed us is enormous. The whole complex is so picturesque, and all the windows seem to look out on to different hidden terraces. It's a proper château, too, with architectural features covering most centuries from the 11th onwards. He says they've been visited by Bâtiment de France (the arbitors of what can be done to historic buildings). BdF were very pleased to see the interior and structural elements, as they have never done so before, and Steve's sister is an architect, so all went well with the visit.

On the way back from La Celle-Guénand we called in on Bruno Douady, the mason in Le Petit Pressigny, to see the salvaged fireplace surround he suggested for us and to accept his devis for building us a new chimney and fireplace. The fireplace surround is perfect, very simple, in local tuffe limestone. M. Douady says he can do the chimney and fireplace in October, but the windows and door surrounds will have to wait until the spring. We looked at some nice salvaged tomettes in his store too, but sadly there were not enough to do our kitchen floor.

With all this rain, we are worried about our cherries. The sour cherries are ready to pick now, and the bigereau (sweet bi-coloured varieties) are only a week or two away. The rain will cause them to split on the tree and spoil very quickly if we pick them. We've chosen to pick as many as we can of the glowing scarlet sour cherries, with their translucent flesh. Today's harvest, which we managed to time to coincide with the pauses in the rain, was 8kg, of which we have processed 2kg into compote and 1kg in alcohol and destined to be liqueur. The other 5kg will need to be dealt with tomorrow, or they will go bad. Alex, Nicole, Isabella and Amélie Crawford came over from Les Limornières and picked a few kilos to make cherry wine with, but between us we've only picked about a third of the total crop so far. All our other local friends are disappearing under a pile of their own cherries, so we'll just have to come up with at least a dozen creative uses for cherries that can be achieved in a kitchen equipped with two campingaz stoves and a mini oven. Nicole very kindly brought over two mini pumpkin seedlings and a potiron seedling for our potager, so when the rain eases enough to make working in the vegetable garden possible again, they will get planted out near the melon, zucchini and cornichon.

The arrival of another storm put paid to any more cherry gathering, and we rushed home just in time for our appointment with our hairdresser neighbour Ghiselaine.

The one thing we did not do was return the car to Elvis. Since the temperature gauge on the dashboard never goes far above medium, we feel it is difficult to justify the car spending more time at the garage or spending more money on it.

Email ThisBlogThis!Share to TwitterShare to FacebookShare to Pinterest
Labels: Chaumussay, Food and Drink, le Jardin, The Car and Driving, Towns and Villages near Preuilly

Sounds like you really need a second opinion on the car, if you need anything at all. I would probably give you some peace of mind to have a different mechanic tell you it's fine.

That is a lot of cherries. We have some around here -- more than we can use, since we definitely do not need any more confiture, can not eat much more clafoutis, and have no experience of making cherry wine or putting cherries up in alcohol.

There was much rain yesterday and then even more overnight. It was quite a storm, evidently. I slept through most of it.

Now you've got me thinking about putting cherries up in alcohol. I'm going to buy some alcool pour fruits tomorrow and then go pick some more cherries. I'll read about it on the 'net.

I see that you really have your hands fulls with the cerises amères !
Sorry that we could not be of more help; distance and work keeping us unfortunately away from your "vergers".

I hope too that the rain won't spoil the bigeareau !
Nice pictures of the garden in Chaumussy near la Fontaine Saint Marc. Know the spot ! Though we haven't had the pleasure to talk to the jardinier.

That cheminée sounds so nice too !Good luck for that work too.

Today my neighbour Christine asked me if I liked cherries...

Our other neighbour Ghiselaine (the hairdresser) recommended her mechanic in the next village. He is independent, and several other people have recommended him too, so I think Ken's idea of getting a second opinion is a good one.

Ken: The batch of cherries in alcohol I did yesterday is for liqueur, so the cherries themselves will ultimately get thrown away. Tonight I am going to put up some with sugar and spices to use as soused cherries for dessert.