Day One in the Garden

I have never really got gardening. You do it outside in the sun (I don't really do sun), it involves bending over a lot (which I don't do) and it is hard physical work (three words that strike terror into my heart). When I was growing up we had a fairly large garden, some of which was given over to growing stuff apart from grass, but anything we planted always seemed to come to fruition while we were on our summer holidays.

It is therefore somewhat surprising to me that the drive to purchase our new garden came from me as much as from Susan. I think part of the motivation for buying the block we did was that most of the really physical work had been done - it has fencing, mature trees and the ground was tilled. But it is big - the vegetable plot would take a tennis court, and there is about 4 hours worth of grass to mow under the trees.
Cherry trees. None of the cherries are ripe yet 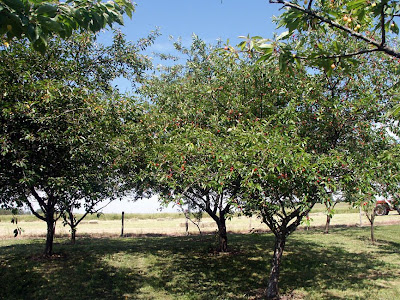 Yesterday we went to the block for the first time to do gardening. Because the car was still with Elvis (for anyone entering this conversation here, no, I haven't gone doolally) we walked down, carrying an assortment of hoes, rakes and seeds. 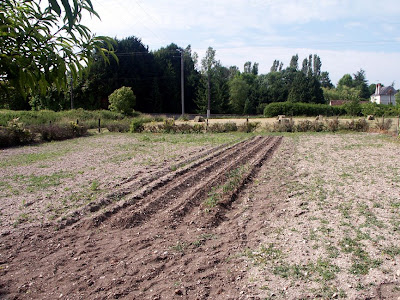 First we built up some rows of dirt, weeding out weeds (naturally...), then we sowed stuff: carrots, beet, beetroot, lettuce, sweetcorn,courgettes, some herbs, and some flowers for the table. Halfway through our work the neighbour from the next block called over, and we were amazed to find out we already vaguely know him - it's the old chap from the market who always calls Susan la p'tite dame. It turns out that the hazelnuts Susan bought from him two weeks ago came from our block. Twenty minutes later another car arrived and it was the lady who owns the next block over from the old chap. She introduced herself, and when we explained where we lived, commented on the pretty front garden with the flowers.

On Thursday when we were assuming control of the garden we met the man who makes hay on the large piece of land that borders on two side of the garden. Yesterday he stopped heaving hay bales (his machine had broken and he was doing it with a pitchfork) and had a chat with us about how good the trees were looking and how warm the weather was. 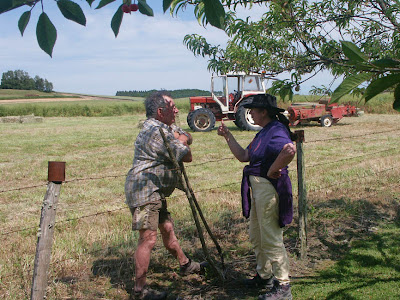 Anyhow; gardening. Susan says you can grow to enjoy it.* I will reserve judgement on that for a year or so.

Then - this morning I got up at 7.00, went to the loo - and while I was in there I heard an almighty crash. At first I thought it was the top half of the staircase deconstructing itself, but on opening the toilet door I found the ceiling that once sat under the new bathroom floor was now sitting on a table by the back door.

The ceiling. I took the sheet of plaster
down even before I had a cup of tea. 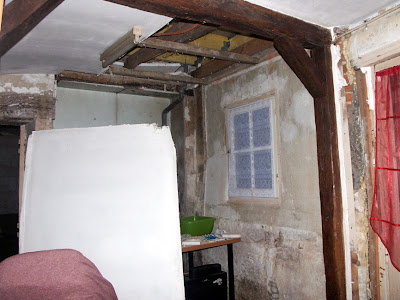 So now I know what my job list for today is: clear debris, ring Elvis (yes, the car still wasn't ready yesterday) and then hopefully pick up car, buy aubergine plants, bean seedlings, melons, more tomato plants; plant the purchases then water the potager (even though yesterday evening we had 3 drops of rain), and go to the decheterie.

I feel like I need a lie down even before I have started.

Email ThisBlogThis!Share to TwitterShare to FacebookShare to Pinterest
Labels: le Jardin, Our house in Preuilly, The Car and Driving

Simon, you can't tell if Susan is being funny or not. I can't tell if you are being funny or not, but I think, or hope, you are. In my short experience of such things, gardening is always back-breaking, sometimes heart-breaking, but always rewarding in one way or another. Even last year, when not much grew well because of the sucky weather, we got loads of beautiful green beans -- haricots verts -- and Walt figured out how to blanch and freeze them. We are still enjoying them now.

Ken: I doubt if we will never know if Simon comes to enjoy gardening or not. It offers too good an opportunity to complain about things for him to pass up though.

Simon is a man after my own heart... or mental state.

Word verification string is "bionts". Surely that is significant.

Did you ever wonder if you would have enough to do to fill your time in France ??!!

Simon: In all this adversity, you seem to never loose your sense of humor. Good for you.
You might even grow up enjoying the hard work which goes with country-living. Who knows?

CHM: If it involves growing up, then he won't.

catching up, been on the road. how nice, even if you hate the actual gardening, to meet and talk on a friendly basis with the french gardeners.