Cherries, a new friend and some expensive repairs

Wednesday evening we took our now customary stroll, our route this time taking us down rue des Cygnes (Swan Street) and up the hill via the C2 towards la Pouët. As we came up the quiet sunken lane we could hear a bit of a rumpus eminating from the house at the top. There were lots of shouted instructions and a few cries of alarm or warning. As we came out of the trees and round the corner we could see why. Grandpère et petit fils were harvesting the cherries. That's Grandpère perched on a pallet held up by the tractor's hydraulic arm. When we first arrived, the young man on the ground was in the tractor cab, doing some final adjustment of his grandfather's distinctly perilous position. 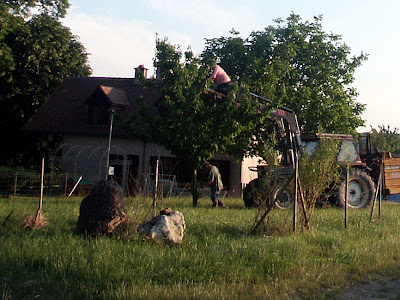 Yesterday morning, after the usual domestic chores, we called in at the insurance office to sort out our health insurance. Marie-Hélène had given us a quote which we felt was outrageously expensive, so we went in to find out what the alternatives were. Fortunately, there seem to be a number of options and ways of reducing the cost and she is going to do us a new quote.

While we were there, a woman arrived and Marie-Hélène asked us if we knew one another. I recognised the woman as Louisa, an American who has spent most of her life, including much of her childhood, in France. We have run into each other a few times, but never been properly introduced or spoken beyond polite small talk. Many of our local friends know Louisa and ask if we know her, but somehow it has taken until now for us to connect. It turns out that Louisa's sister knows the blog and has also been asking Louisa if she knows us.

Two hours later we emerged from Marie-Hélène's office, having been almost completely side-tracked and having had a very enjoyable and informative conversation with Louisa and Marie-Hélène, who are clearly old friends. We only left when we did because we had an appointment with the vendor of our new orchard / veggie plot.

Louisa's barn (and if you think this is picturesque, you should see her house,
which apparently turns up occasionally in tourist magazines). 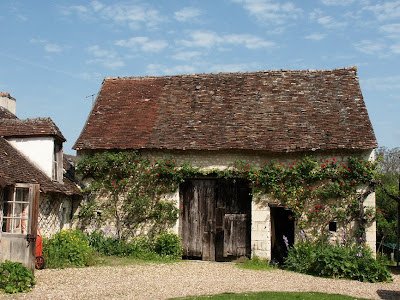 After an extremely hasty and inadequate lunch we walked down to the orchard and found Monsieur P, the vendor, had mowed and was waiting in the comfort of his car parked under the large walnut at the front of the block. We walked around the block and he showed us exactly where the boundary is and gave us half a dozen extremely sturdy looking Pierre Noir tomato plants, which we planted and watered together. He said he was giving up the garden because his wife is not well and they have moved away from Preuilly as a consequence. Although we do not pay for the block or get the deeds signed over until late July, he is happy to hand over the responsibility now and give us the benefit of this year's fruit crop and the opportunity to sow some vegetables. 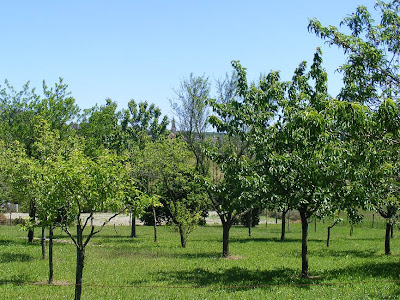 We couldn't spend too long with him though, as we were waiting on a call from Elvis to say that the car was ready. When he didn't phone, I phoned the garage for a progress report. The receptionist said that the car was not ready and that we had better come up so Elvis could explain fully. That didn't sound good!

And it wasn't! Elvis said that the front passenger brake was leaking fluid and some of the mechanism needed replacing. He had ordered all the parts and was ready to do the work, but needed our go-ahead. We were expecting a bill of no more than a couple of hundred euros for the alternator belt and its associated parts. Instead, we will get a bill for nearly a thousand euros! And the car probably won't be ready until Saturday morning!

Email ThisBlogThis!Share to TwitterShare to FacebookShare to Pinterest
Labels: le Jardin, The Car and Driving, Towns and Villages near Preuilly

Ouch !! Still, safety comes first when driving - better than not knowing the fault was there and having a nasty mishap. Bit of a shock, though - poor you.

Jean: As Elvis said, we can now be tranquille.

A shame you couldn't spend longer with the former owner of your impressive garden. He probably has a pretty good idea of what to do when and how to do it (though maybe not organically), and also what varieties are in the orchard. Do you have strawberries? I encourage you to grow strawberries, and when you pick them next spring, remember to ask me for a very good (okay, the best!) shortcake recipe.

Cars can be very costly 'toys' indeed. Pity we can't do without them! Mine is not even three years old, and it will only be completely paid for by the end of this month. Yet, I had to have part of the automatic gear box replaced. Cost: 923 euro!

Carolyn: We have a diagram telling us what all the trees are, but I tried asking him for his trucs et astuces, and didn't get very far. I'm not too bothered, now we have found out who our voisin is, as he must know all there is to know about veggie gardening here. We don't have stawberries, but certainly plan on installing them later.

Martine: Elvis tells us we have yet another problem with the car – electrical, and he doesn't know how much it will cost until he has looked at it. We have the car back on 'day release' for the weekend, with strict instructions to faites attention. We have to take it back on Monday for the rest of the work.