The past few days I have been building stuff, but yesterday I got back to doing what I feel more at home with - breaking stuff with hammers.

After chipping away some of the plaster in the stairwell the other day, I decided that it would be a good area for us to "feature" some stonework. I also realised that the menuisier would probably be happier putting the staircase up to walls unencumbered by plaster and render.

This means that on the hottest day of the year so far (31º and counting), with all the shutters shut to keep out the heat, I was up a ladder bashing stuff with a mason's pick. I may not have been dressed for the part; shorts, t-shirt and carpet slippers, but I was effective. I wasn't using the Electric Destroyer, so I didn't feel the need for protective clothing. 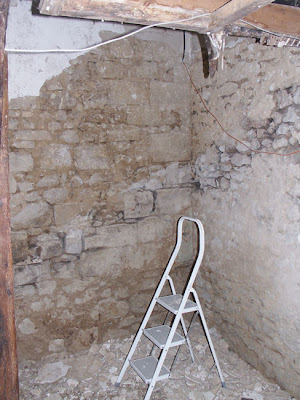 Today and Wednesday are supposed to be even hotter, so I will only be working before lunch - before the western side of the house starts to heat up. I will be shifting the rubble from yesterday out of the stairwell, before chipping some more off, and this afternoon I plan to be, as one of our neighbours put it last night, a mouse hiding in my hole if it is as hot as yesterday. 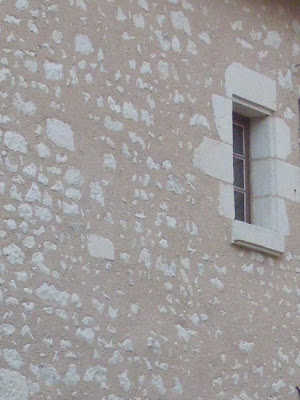 After dinner we went to the Jardin to water. EDF have re-sited some wires that used to go across the garden - we are not sure when, but the wires were still strung the day I had to prune the nectarine tree. This makes our garden even more attractive. The cherries have just about finished - there is probably half a tree's worth of sour cherries to pick, then we can weed the veggies until the peaches, plums or nectarines (whichever comes first) need dealing with.

Email ThisBlogThis!Share to TwitterShare to FacebookShare to Pinterest
Labels: le Jardin, Our house in Preuilly, Staircase

Simon, You did a terrific job, specially in those dreadful circumstances. I'm sure your staircase will be one of the main features of your house. Keep up the good work ... but don't do too much when it gets too hot. Martine

Boy you are not just busy, you are busy, busy, busy. Sorry for the heat but 'round these parts it has been at or over 100 degress Farenheit daily. Yowza. Happy construction to you.

before i move on to july, catching up, dried cherries have gone hrough something of a vogue here in the states -- good in salads, poundy type cakes and so on. you can make your own dryer, or buy an electric one.
http://www.pathtofreedom.com/pathproject/offthegrid/solarfooddryer.shtml

also, there's a recipe on line for glaceed fruit, incuding cherries, which are a great christms prezzie.