Disaster at the ol' Nectarine Tree

Yesterday was a quiet day for us after visiting Ken and Walt on Tuesday. Although we were careful about how much we drank because of the hour long drive home, we both caught a bit of the sun and so arrived home feeling not the best. After a late start we spent the morning pottering around the house and making cherry cordial, with a plan to spend the afternoon at the orchard.

Just as we were leaving home for the orchard the phone rang. It was the secretary of one of our friendly local menuisiers wondering if we were home, and if so could he come and look at our staircase hole. We jumped at the opportunity, because it's always good to get the artisans into your home and show them the actuality, communicate with hand gestures rather than awkward silences over the phone, and to play on their sympathy to try get the work done sooner.

After he departed we hotfooted to the orchard, where it became evident that the combination of a huge crop of nectarines and the nice cooling breeze had conspired to try destroy the old nectarine tree that stands by our garden gate. 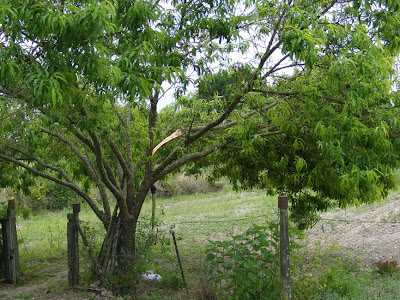 The branch which broke had been going for a while - this we discovered once I had cut it all away and we could see where the water had been entering a split. It has made a huge difference to the tree (and to our crop) because the branch had torn in such a way that the limb it tore away from needed to be cut down too. For the cutting I used the saw that Martine and Christian had given us which made the job easy. 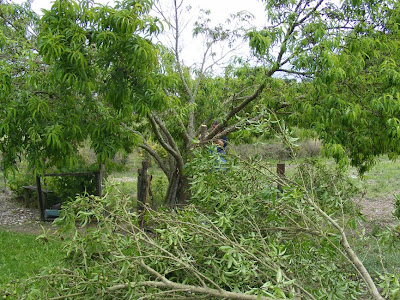 We have now worked our way through the tree, removing part of its crop to lighten the load, and propping up a couple of branches to reduce the amount they sway in the wind. We hope this works, and that later in the year we can trim the tree back to manageable proportions without destroying it.

We took the damage to the nectarine tree as a warning and worked our way around the peach trees (6 of them) taking off the excess fruit and trimming away some dead branches. The peach crop looks as if it could be impressive this year, so losing 100 or so peaches isn't as upsetting as it could be.

Email ThisBlogThis!Share to TwitterShare to FacebookShare to Pinterest
Labels: le Jardin, Our house in Preuilly, Staircase

We are glad to read that the saw has come in handy already. Sorry to hear about the damage to the tree, though. Martine

Hi Simon & Susan,
I've been very occupied at home since mid June, so I think that I've missed a few chapters here !I have to get caught up :)

That's sad for the Nectarine tree. I've had my share of "tree problems" this year when 2 storms brought down half of a huge pine tree.
Geez... I never chucked so much wood in my entire life.It's very hard work to work with trees.

This problem of the weight of the fruit is not one I had thought about before. Our big apple tree is probably at risk in a similar way. We had strong winds this afternoon. I'll have to go look and see if everything is OK out there.