I mentioned on Thursday that the menuisier had called to have a look at where our staircase will go and update the devis.

While he was here we talked about where the stairs will land. So that he can get all the treads even we need to know where the floor level will be and to actually lay a floor to the correct level for him to place the stairs on.

Whilst most of the old kitchen/dining room/whatever has been laid in modern cement tiles, there are one or two patches where the tiles stop short. One of these is where the staircase will land. The tiles were put in place (rather quite well, actually) after the old staircase was in place, and beautifully cut around where the bottom step was. The plan is to bring the patches without tiles up to the level of the top of the tiles with a cement pad.

The melange of levels and
surfaces under the old staircase 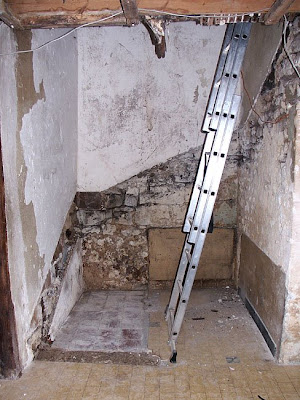 So - yesterday morning I started with my electric destroyer (an SDS drill, actually) chipping away a row of tiles and some of the stuff (no idea - cement dust? sand? rotten stone?) underneath. This is where I had intended finishing, but on a whim I decided to chisel down further to make the concrete pad thicker and less likely to flake.

I also took off some nasty cement render from the walls, and another patch of poorly laid cement floor that was where a wall once was.

Next step is to find some levels and lay some cement. 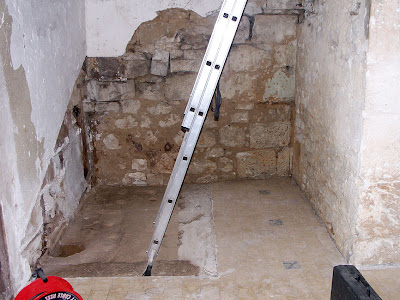 Yesterday afternoon we went to the garden to pick some cherries (we haven't forgotten), water the garden, and see what has developed. It looks like we should have a good crop of chillies and tomatoes and some aubergine, and the courgette are coming on a treat. All we need in addition to our crops to make ratatouille will be some garlic - fingers crossed!

The wall looks great with the render removed. Will it be visible after the stair goes in?

I would like to have exposed stone in some part of the house, and the staircase seems an opportunity to have a small area that doesn't look as if we have tried too hard to expose stone just for the sake of it.

Simon - this "foot of our stairs" expression is one my mother used all the time. I thought it was just Derbyshire and Yorkshire people that used it. It means "oh, I am surprised". I once arranged a small quiz with lots of similar expressions. Might try it on you one day !

Simon, Its such fun knocking stuff down isn't it?

Its probably too late now but you really should get the rest of that plaster off before the stairs go in, that wall will be great....and I'd be tempted to dig a hole near the bottom of the ladder and see exactly what is down there. Buried tommettes? Ancient flags or just earth?

Whats the plan for the floor? Tiles, wood, purple shag pile or something scary and modern?
Nick

I thought the phrase could be meant a bit sarcastically, meaning that what you've just heard isn't that earth-shattering.

As this will be the one and only time that you will be able to consider the floor beneath your new (and probably quite costly) new staircase, I would humbly suggest that you take up what is after all a small area and get it properly sorted out, i.e. with a damp-proof membrane and a bit of strength to support the staircase loading, both 'dead' and 'live' loads (people can be quite heavy). You don't want damp to rise beneath all you new work and rot it out. Re the walls: pierres apparentes is OK particularly on internal 'warm' walls (which this is, if I remember) which do show signs of any rising damp at ground level. Lime pointing will allow some moisture to respire from the walls. Don't use any 'portland' cement in the re-pointing.
.......well I'm supposd to know about these things; forgive me!!

Autolycus - that is the impression I get, but I could be being post modern...

Nick - it's turtles, all the way down. The plaster may or may not come down before the staircase goes up. It depends on how I feel after dinner for the next few weeks (demolition always happens after dinner. Dunno why!) Of course, the menuisier might say it has to come down - in which case a rapid demo job is in the offing

T'was me deleted the comment. What I meant to say was - whenever I hear the "stairs" saying here in Derbyshire, it is to express genuine surprise, eg "her next door's had triplets" would produce the "stairs" saying. Maybe it is one of those phrases that have been taken up by some people who use it to make fun of us northerners. I asked my dad and he says he's never known it to be used sarcastically in his time.