An Afternoon in St Savin

We have been to St Savin a number of times, but not since the restoration work on the 12th century paintings has been completed. So when Ken and CHM visited us on their way to there we took the opportunity to tag along (as it were - I drove).

The restored church is a lot more open and airy than I expected, the previous times we visited it was filled with scaffolding and temporary walls and you got no real idea of the scale of the thing. We were impressed by the "candy cane" columns, which have been painted much in the manner they would originally have been painted, but in muted, faded colours rather than the poke your eye out variety favoured by previous generations of restorers. 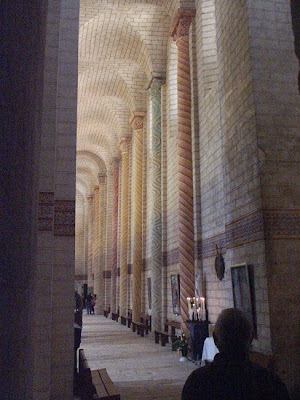 This is not to say the church is perfect - there was a quite appalling "installation" artwork with sub John Williams atmospheric movie score soundtrack. This has not gone down well with visitors, as evidenced by all but one of the comments in the visitors book.
I rather like this photo of the lime trees
outside, taken through a clear glass window 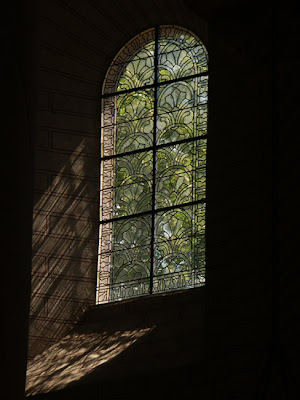 CHM knew St Savin well and while we sat in the garden behind the church told us something of the family who lived in the "Chateau" which is attached. He spent some time there as a child, including when he was evacuated from Paris during the 1939-45 unpleasantness. In a comment on a previous blog entry CHM said "This part of the abbey was known as the "château" and was the property of M. Édoux, of "Ets. Édoux-Samain," a Parisian lift or elevator builder of the late 19th and 20th century who was a friend of my father's. M. Édoux built this faux medieval tower to encase a hydraulic elevator, what else!"

The church gardens. The building on the left
was for many years the gendarmerie 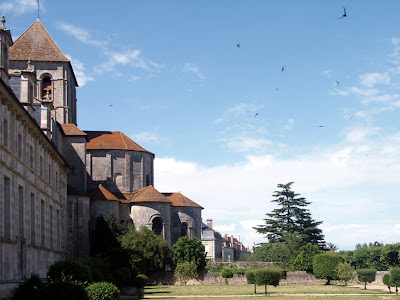 After sitting in the garden and watching the swifts whirling and swooping we adjourned for refreshments (lunch, having been taken at least 3 hours earlier, had worn off).
Time for a beer and a history lesson 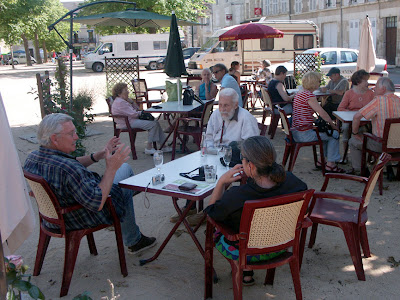 The view from the cafe. 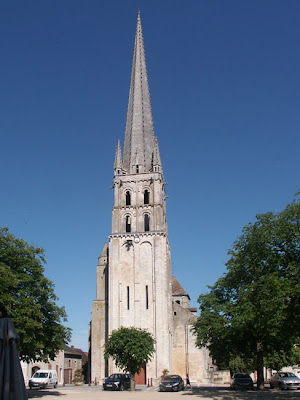 We had a really pleasant, relaxing, but very informative afternoon with good company in pretty surroundings. What more could you ask for on a perfect late spring day?

PS. The morning was spent making cherry jam. We have to do our chores... This morning Susan will be making sauce from the last of the cherries we have picked. Unfortunately, it's raining, so we can't go and pick more cherries today.
Posted by Simon at 09:00

The pleasure was all mine. This very nice afternoon in St Savin brought back fond memories buried in the recesses of my human computer.

The company was as pleasant as the cooperating weather. In all, something to remember and images to recall in the days ahead.

A day well spent. Love the columns and the window photos.

So glad to have come across your blog, via Ken's. The next time we are heading south, we'll add St. Savin to our list. It looks beautiful, but even more important, interesting.

Ellen: I can really recommend St Savin, and it is outstanding enough to have won UNESCO World Heritage listing.

Lovey photos, another place to put on our list of "must visits". Glad you enjoyed the day off the cherry picking.