Yesterday was sunny so...

We only picked 3Kg of cherries yesterday. This was because most of the morning was spent at the brico shop, and the afternoon was taken up using the stuff we bought at the brico shop to make a support for our boysenberry bushes/vines/whatever they are.

You can see the boysenberry trellis behind the tomatoes 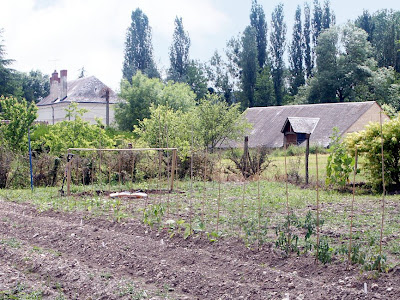 Then we picked cherries. I have a new technique, which involves climbing into the tree, grabbing a branch, and shaking like a madman. Then all the cherries drop onto Susan's head and she collects them. It beats climbing ladders and plucking the cherries delicately from the branches.

That means we have picked 21kg so far, with probably another 11 - 15Kg left on the two trees we have been picking. Next week the two trees with big cherries will need picking, then hopefully we will get some respite before the last two trees need doing. We're keeping our fingers crossed that the peaches and nectarines won't be ready for about 6 weeks after that so we can get something besides picking fruit done. Susan stewed 2Kg of cherries this evening, and I made 500ml of cherry syrup concentrate with another kilo. (Actually it's Cherry and Grand Marnier ice cream topping). If we don't process the fruit when we pick it we will never keep up!

When we went to the brico place (that's a hardware shop to you non french speakers) I took a list written on my new French shopping list book. There are some things you just expect to be the same all over the world. I mean - notepads: it's paper in a block with some sort of binding, and sometimes they have lines on them to help you write in a straight line.

How many ways are there of doing this? One, you would suspect - the way it is done at "home". Imagine our surprise to discover that cultural assumptions can be misleading even when it comes to a notepad.

Then I was bemused to realise that the grid paper was lined paper - but lined both ways. I assume this has two benefits – it means that the notepad makers don't need to retool between making notepaper in landscape and portrait aspect, and if you put one letter in each box you end up with very neat writing. 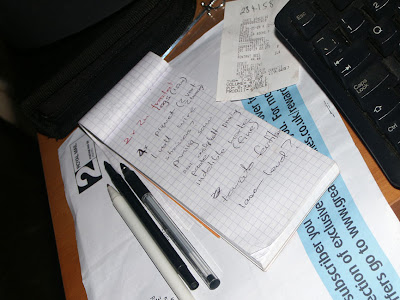 Today no cherries (well - maybe a few); Ken, and CHM are coming over for lunch and then we are all off to St Savin, so we might make them pick cherries to work up an appetite. I intended to get out of bed early and go to BricoDepot to buy a shower cubicle and some more plumbing to install a shower, but the constant change in the weather and working in the garden has given me hayfever, so at the moment I am sitting...

Doing the shower should only take a couple of hours, so I expect to be struggling with it all next week.

Hi Simon,
Your expectations are a little too high! My appetite, fortunately, doesn't need whetting by cherry picking, thank god!

Looking forward to see you and Susan very soon.

Word verification is gratily. Could I say: "Gratily, I have a strong appetite?"

Oops, it was me who deleted the comment - I'll write it right this time.
I love those squared paper notepads. They do them in all shapes and sizes and also in cards. I know because I have lots of them. Very handy for someone sad enought to have a stationery fetish. Nick has to drag me across the road away from stationery shops before I spot them or I would be in there for hours. Computers just aren't the same as a nice notepad and a favourite pen.

Hi Simon & Susan,
Busy is really an understatement here.
And if the method of mad branch shaking works, don't knowk it ;).

I've seen somewhere images of trees being skaken with a sort of belt around the trunk that vibrates and makes the fruit drop.

And you are making lots of yummy cherry products ... and making friends by giving out some fresh fruit.

Have a nice Sunday.

Jean: There is something about stationery shops, isn't there...

Barbara: The tree shaking certainly works for us. The only disadvantage is that if you tip the fruit directly from the tarp into your bucket, you also get a lot of rubbish that needs to be picked out before you can process the cherries.