When we moved from London we bought a lot of plants with us. True, we had two goes at it, and things didn't go as smoothly as they could have, but we got 95% of the plants we intended to bring over to Preuilly, and they are now installed in our front garden.

Add this to this and you get this 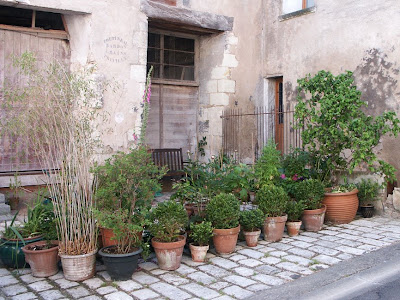 The front garden has prompted a lot of comments; apparently until quite recently foxgloves were a controlled plant (because of the digitalis) and the locals seem fascinated by it and often comment - goodness knows what comment the opium poppies will get! The other plant they cant resist commenting on is the twisted hazel - often we are asked if it is ill or diseased.

Yesterday we got the car back. Elvis seems worried that the radiator fan doesn't come on and the car will overheat. It all seems normal to me, and the needle on the temperature gauge seems to go to its regulal place and no further, so I am not sure. We have spent a lot of money on the car this week and the thought of spending more doesn't appeal, particularly when the engine temperature is the same as it has been for the past 2 years.

We didn't get to the block though - it rained, so going to water the plants wasn't necessary, and by the time we had collected the car, taken a trailer load of ex-bathroom walls and ex-ceiling to the dechetterie, been to the supermarket, bought more plants and looked at wellingtons (gumboots/galoshes), it was time to cook dinner (petit sale, since you ask). Today we planned to go and plant our new babies - a whole load of chilli plants, aubergines, leeks, beans, courgette, cornichon, and melons - but overnight it rained again, and because we looked at rubber boots rather than buying them we may have to look at Fridays work and just move on. The soil is pretty light when dry, but fast becomes a quagmire when wet.

This may mean we pick some cherries, then go to the flower and second hand stuff fete at Chaumssay before going to "des livres et des Roses" at Azay-le-Ferron.

Email ThisBlogThis!Share to TwitterShare to FacebookShare to Pinterest
Labels: le Jardin, Our house in Preuilly, The Car and Driving

How do you prevent your terre cotta pots from cracking during winter? Do you bring them inside?

May be it does not as cold as her : minus double digits (celsius) cold :-)

I know I have to bring my potted plants inside for the winter here in Saint-Aignan. Our temperatures go down as low as -10C, or even lower in places. Maybe the central village at Preuilly is a little more protected from the cold.

S&S, hope you got some gardening done today. It has been raining here off and on all afternoon, with some fairly hard showers. We decided not to go to Ste-Maure after all, seeing the iffy weather.

By the way, we've had foxglove (digitales) growing in our garden for several years. Our neighbors grow big tall poppies (pavots). Nobody has ever mentioned any problem with either of them.

Ken. I was surprised by the reaction - it never occurred to me that people would find a foxglove exotic. Maybe it's because we're in the sunny south... We got plenty of gardening done today - a row of leeks, chillis, aubergines and some melons. I also planted the rhubarb, and then we went to a plant fair and bout more tomatos.

Beaver - In London we never bought plants in - anything that couldn't cope pegged it and that was that. Dunno how we will go here though

Beaver: theoretically all our pots are frost proof, and I think Ken is right – being in the village should give us a measure of protection. I will be careful how much and when I water during the winter, but other than that, we and the pots will take their chances.

Ken: someone we met the other day said that until recently growing foxgloves in private gardens was banned, just as opium poppies were. I knew about opium poppies being prohibited, but not foxgloves, and I knew the law had recently changed. I doubt your neighbours are growing opium poppies – more likely oriental poppies. Are they mauve with grey leaves (opium) or red with green leaves (oriental)? Mind you, I saw some opium poppies in someone's jachère today.

Isn't Opium poppy (papaver somniferum) an annual whereas Oriental poppy is a perennial? I have oriental poppies ( I like the red flowers so do the squirrels - they will pick them and leave them on the ground- like some mischievous kids- same with my tulips ).

We are allowed to have foxgloves also in Canada.

Beaver: That's right. Orientals do die away completely and disappear in the winter and come again in the spring though. I sowed some Oriental Poppy seed in our veggie plot yesterday. I've never lived anywhere they grew well before, so looking forward to them.

Our neighbors seem to have the oriental variety, based on your description.

But what's the deal with foxglove? Why was it banned?

Walt: Foxglove is the source of the drug digitalis, which is used in cases of tachycardia to slow the heart beat down. It is fairly easy to accidentally take too high a dose and slow the heart to a standstill, so I assume that is why they were banned – essentially they are poisonous – but so is laburnum and monkshood and a load of other plants that aren't banned, so I don't know for sure what the reason was.