Yesterday we met Martine and Christian, from Belgium. Martine blogs at Wishing I Were in France and found our blog through Living the Life in Saint-Aignan.

They came to have apéro in what Martine dubbed our 'fairytale dining room'. As with all our visitors recently, we offered them our new apéro de la maison – kir made with our home made cherry cordial. They chose to have it with white wine, Simon has taken to having his in red wine, making it kir cardinal.

After apéros, they rummaged in the boot of their car and produced a wonderfully generous array of gifts. There was a box of chocolates, of course, but also a spade and pruning saw for the new garden and a screwdriver set and some screwdriver bits, a pair of multi-grips, a fret saw, work gloves, carpenters' pencils, and a file. Christian works for a big tool company and all the tools are good quality brands (Spear & Jackson, Bahco). We couldn't believe our luck! 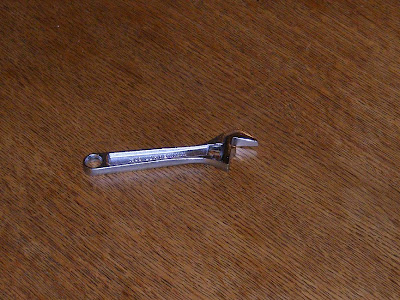 Martine had scoped the area via the internet and decided on a restaurant for lunch – a ferme auberge near Betz-le-Château, about 20 minutes away. Fortunately we decided to phone ahead to let them know we were coming, or we might have found a locked door. We were the only customers and the patron said it had been a very strange month, very slow. 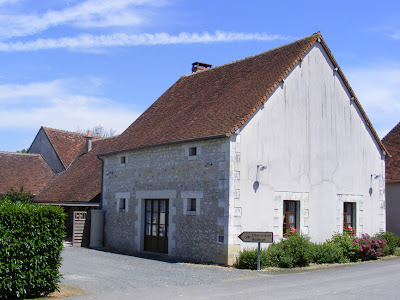 The Ferme Auberge de Bournaichères raises pigs and makes pork products. Their rillettes and boudin noir are extremely well regarded, and as well as the restaurant they have a shop on the farm selling their products. Ferme auberges are required to serve meals from ingredients largely produced on the farm, which means that you are generally not offered a choice of dishes.

The meal started with a rillette. The patron seemed concerned that we didn't eat enough but we assured him it was because we were pacing ourselves and looking forward to the next course. The main course was the most amazingly tender pork escalopes, cooked in a little cider and flavoured with thyme. There were a few little half champignon de Paris in the sauce too – the chef was apparently ringing in the changes today, as usually this dish was served sans mushrooms.

A cheese course followed, with a camembert, a Sainte Maure de Touraine and a brébis from the pays lochois. The camembert was quite strongly flavoured and we liked the brébis very much. The Sainte Maure, of course, is our local cheese, so we have it in some form or other several times a week, and love it.

We laughed when we saw the dessert – a simple bowl of fresh dark cherries. We told the patron that we had spent the last week picking 30kg of cherries from our own orchard. He said that he had that quantity in the freezer alone, and that his grandfather had planted the trees. Then he went off and fetched an alternative dessert of generously sized crême brûlées in attractive hand made bowls. Naturally we ate both cherries and crême brûlée. 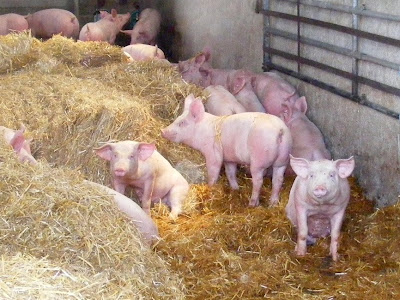 The restaurant is open and airy, with big solid wood tables and chairs. The patron is chatty and amusing. The food is simple and excellent. The cost per head was €11.50, and included unbranded wine and coffee – sensationally good value.

We had a great time and are really glad that Martine suggested we go. We didn't know of the restaurant before she mentioned it, and it could have been ages before we discovered it. We really enjoyed Martine and Christian's company, and hope they visit again. They are such nice people that they have made many friends in the Loire over the years, as they holiday here most years. These days they spend their holiday driving from friend to friend and meal to meal. After saying goodbye to us, they were off to Vouvray to have supper with a chef friend with a huge wine collection.

And in cherry news: I stewed 2kg of guignes and froze them, and made clafoutis. We picked 3-4kg of bigeareau and another 2-3kg of guignes. I think I'll make some little individual clafoutis and freeze them and another batch of jam.

Cherries are a mystery to me, but around here they talk about the small sour cherries as guignes, the bigger cherries as bigarreau and morello cherries as amorelle.

We have various bigarreau trees, including couer pigeon, Napoleon, and geant. We picked all the Napolean cherries yesterday and they are making good eating.