Thieves in the Night

Another very hot dry day yesterday dawned and we got up grateful to now have a functioning shower. Alex was due at 9am to help with the cementing of the staircase base* and he arrived just as I had made coffee.

I left the two blokes to do building work and went out into the garden to pot up some seedlings I had promised to Alex's wife Nicole. As I walked past the front of the courtyard I realised there was a gap where a box ball in a pot should be.

The courtyard garden, a week ago.
Geranium 'Gravetye Blue' is at lower centre. 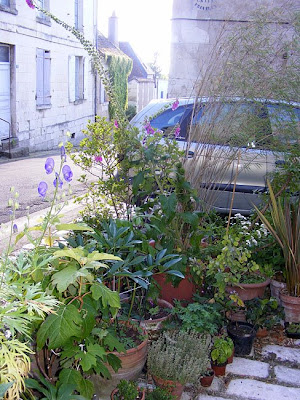 Sadly, during the night, someone had succumbed to temptation and stolen a box ball and the Geranium 'Gravetye Blue'. It made me want to cry, but it wasn't totally unexpected – we knew putting the plants out in a courtyard open to the street like this was a risk. The florist in town used to leave all her plants out on the street overnight, but this year, no longer does.

The telltale gap, where a box ball in a pot should be. 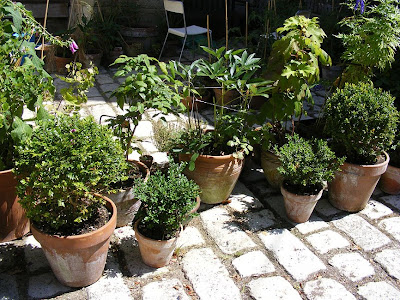 I dropped off one of the seedlings I had potted up to our neighbour Sylvie and told her about the theft. She said she and Pierre-Yves had not gone to bed until 2am, and had heard nothing. We had heard nothing either. She said I must report it to the police, as there had been a number of plant thefts in the area. Pierre-Yves took the view that the police would just tell me they couldn't do anything and I should erect a fence. I thought the same, but went off to the Gendarmerie anyway – might as well meet the local constabulary sometime...

The Gendarmerie is in a compound on the other side of the river and you have to buzz to get let in. I told my story to Gendarme-Adjoint** Améry, who was professional enough to not give any hint that he thought that dealing with two stolen plants and a middle aged Australian woman with inadequate French language skills, dressed in not very flattering shorts, was not his idea of a productively spent Sunday afternoon. He will let me know if he hears anything.

Back at home we tossed around ideas for protecting the plants. Any fence we erected would have to be clearly temporary, and therefore almost certainly ugly. We cannot enclose the area or erect anything permanent without the permission of Bâtiment de France, who would take months to make a decision.

Drilling holes in the pots – any excuse to
use the electric destroyer! 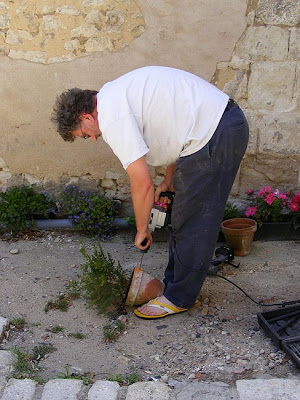 In the end it was Sylvie who came up with the cunning plan to foil future plant thieves. She suggested running a chain along the pots and fastening each of them to the chain. We didn't have a chain, but we did have some fencing wire because we need to make a trellis for some Boysenberries we've planted in the verger / potager.

Stringing the pots together with wire. 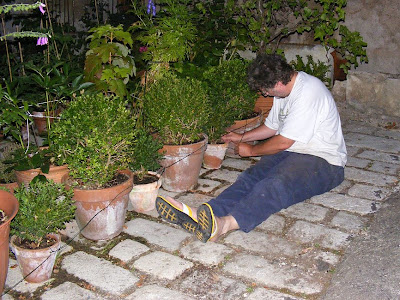 So Simon drilled a hole in each of the pots and we've run a wire along the line of pots. Each pot is fastened to the line by a twitch of wire. A determined thief could still make off with our plants, but taking the pots too will be awkward and time consuming, as they are all strung together now. Hopefully it will not be too much of a nuisance for us if we want to move a pot.

* A big thank you to Alex for helping with this at short notice and on a Sunday.
**Community Policeman
Posted by Susan at 09:00

Email ThisBlogThis!Share to TwitterShare to FacebookShare to Pinterest
Labels: Gardens and Parks, Our house in Preuilly

It's a shame. But all these nice plants are a real temptation. Now the thieves will have to pull the plants out of their pots! To prevent that, you'll have to run a wire around the main stem, fastened to the main wire.

Word verification is empotors. Does that mean people who put things into pots?

Oh Susan, what a blow. Apart from the loss of the plants, it's upsetting to think there are thieves in the village and your belongings aren't safe after all. Very sad. I hope they get greenfly, whitespot, black mould, slugs, rats, rabbits and swine flu. End of rant. Jean

Susan, I think it would be easy for someone in a car to coast down your street (it is downhill), snatch a plant, and roll on down the hill without ever starting the car motor. You wouldn't hear a thing. Hope the fencing wire does the job. Sorry you have to resort to that. I told you about somebody stealing plants out of our neighbors' garden, I think.

Attach some bells to the wires so that if anyone tries again to take the plants at night it will make some noise and maybe discourage them!

We too have had petty pilfering, and are strict instructions from the neighbours not to be so naive and sentimental; keep the gate shut etc.

Word verification this time is 'codmisin' - sounds like an obscure japanese fish vinegar,,,

You could try an electric current running along the wire. Bells might cause you to panic in the middle of the night when it might only be a cat nudging the wires. Or try a booby trap where boiling oil pours down onto the miscreants. Just a thought.

The plants may be a temptation but that doesn't mean that I have to accept that stealing them is OK. I think the wire will be sufficient deterent. Several of our neighbours suggested traps of various sorts. Simon and I both thought electrifying the wire was appealing. Discouraging the hunting cats and peeing dogs would be an added bonus. (Thankfully we don't seem to have the peeing people that we used to in our driveway in the UK.)

Hi Simon & Susan,
I'm sorry to hear this.
No,theft is far from being OK; these are not my values either.

It's a shame to have to chain up the pots, but now that whoever has been tempted... the hand may come back for more.

Sorry; I meant to say "wire" but the image of the chain must have stuck in my mind.

Hmm, I´ll guess that summer is "highseason" for thieves. Sorry for your plants. Our garden was harvested on tulips in April this year. Our neighbour did not see who or whom it was. But all the tulips were gone. They did left the bulbs though. Should I be grateful for that? I was brought up in the fifties when you still respected other peoples properties. Sad to say, things have changed. So even in rural France.

The fact that the thieves chose the Geranium Gravetye Blue and the nice box ball makes me think this is not kids doing it for fun. Somebody, somewhere, has a lovely hidden garden with your potted plants, Bengt's tulips, henri proust's plants, and Ken's neighbor's flowers.