After our shower Saturday afternoon our neighbours Sylvie and Pierre-Yves came over for apéro.

Sylvie and Pierre-Yves live opposite us and are doing a magnificent job of restoring their house and outbuildings. They have done courses in rendering using traditional materials and Sylvie has used the techniques to stucco their bathrooms really effectively. Their latest external addition the the house has been a beautiful stone wall and gateway, incorporating a salvaged iron gate we are quite envious of. They are both hard working and creative and are achieving a thoroughly professional finish on their property that we hope we can match.

A garden chair Pierre-Yves made from chataignier wood 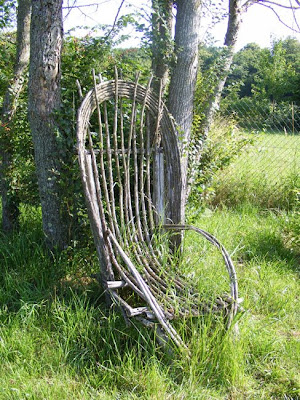 We treated them to Kir Cardinal - red wine with home made cherry cordial. Discussion ranged far and wide - from the different forms that electrical plugs take around the world to how to pronounce trou. We don't say trou properly - nowhere near enough lips-pursed action, apparently. Still - Sylvie was amused at our attempts and has just as much difficulty with English words where you don't move your face at all. 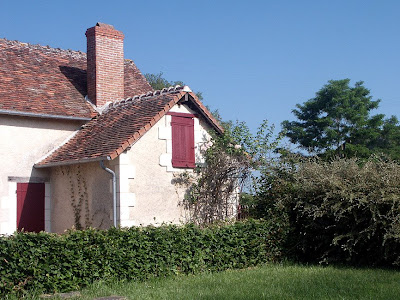 The house in Preuilly is not their first attempt at restoring somewhere in the area, and they invited us to visit their previous home, which they have sold but are maintaining for the new owner. It is a fermette on the edge of the Forêt de Preuilly, and although we can understand why they sold it to move into town, we also appreciate what a wrench it must have been to do so. It certainly showed us what can be done with the old vernacular buildings – the place is a little piece of paradise. Sylvie is a keen gardener and gave us several plant divisions from the garden there.

We had never encountered Contorted Robinia (Acacia)
before, but it makes a most striking and attractive tree. 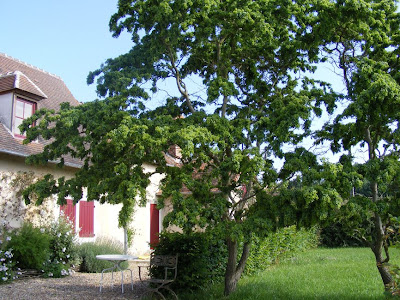 After a café we came back to Preuilly and showed off our orchard and vegetable plot to them. We ate quite a few of the third bigarreau cherry (called Coeur de Pigeon) as it has just ripened. It's not as good as the Napoléon, but quite similar in appearance and more flavourful than the dark red Géant.

By that time it was 1pm and Susan went up to the boulangerie, hoping it would still be open as we didn't have any bread for lunch. She got there just as the baker was pulling down the last blind. He saw her from across the Post Office square and signalled to her to ask if she was wanting bread. When she indicated she was, he very kindly unlocked the shop and she bought the last pain. 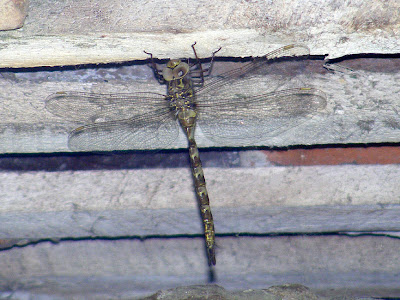 After setting some cherries to macerate in sugar as the first step to making some more cordial, after lunch we headed off to Les Limornières, where they were having a plant open day. They specialise in affordable, tough, drought tolerant, locally adapted perennials suitable for maison secondaires. We bought an eryngium, a lavender and a helenium for a total of €8. The garden there was buzzing with insects of all kinds, including a female Western Spectre dragonfly Boyeria irene. These are quite rare in Indre et Loire, although common in the Brenne, and it is a little bit unusual to see one hawking out in the open in mid-afternoon, as they are usually secretive and fly mostly in the evening, low and close to vegetation. In French they are called l'Aeschne paisible (= the peaceful hawker). They are also known as Dusk Hawkers or in German they are 'ghost dragonflies' and in Dutch 'twilight dragonflies'.

Susan and Simon
Posted by Simon at 09:00

Simon, is that another new header picture ? Please don't tell me it's been there for weeks and I've only just noticed.

Jean
It's new today for Summer. Your eyesight/momory isn't as bad as you feared!