You call this Summer?

It has been a strange summer this year. Talk to anyone in France and they will tell you how poor the weather has been.

Yet, strangely, it hasn't rained all that much in Preuilly since June.

For sure every day lately, at about 11.00am it looks likes it is going to rain. Sometimes it looks like it is going to storm like it has never stormed before. Last Sunday at 10.00 it looked like the final apocalypse was going to arrive in the shape of a thunderstorm. I even got in the car to take photos of how dark and dramatic the storm was looking over the autumn landscape.

Not only did I not get any photos because the clouds had started to break up, but by 4.00pm it was as clear as a bell.

The storm that never was 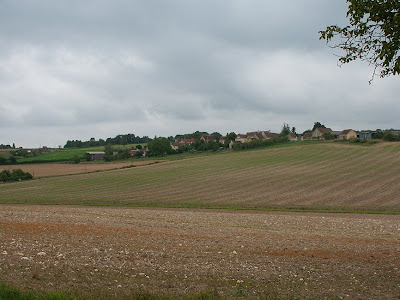 This has played havoc with my painting regimen.

Last year I sanded back the oak windows in the house. The two windows downstairs were given two coats of undercoat and two coats of topcoat and look beautiful. The windows upstairs, however, were just rehung as is - reglazed and sanded, but unpainted.

In May this year Susan's mother gave them a first undercoat, but having an almost continual stream of guests ( not TOTALLY just an excuse), more pressing needs (like the front door and its associated leaks) and failure to guess what the weather was going to do has meant that the windows have remained unpainted - until now.

Yesterday morning I decided to risk painting the windows. The weather started clear but cool, so I started painting. The paint was a bit thick, but I decided it wasn't really a problem. Then I decided it was a problem and a dash of white spirit was needed to dilute it.

I had no white spirit, so I wrapped the paintbrush in clingfilm, closed the can of paint and drove to Gamm Vert, our nearest garden/hardware store (actually in Preuilly itself). Being Monday morning, they were shut. This meant that I had to drive to Yzeures and Bricomarche which I did. On the way back from Yzeures it started to cloud over. This was an annoyance, but as I had started, I was going to finish.

This meant that at 12.30, when all good Frenchmen were eating their lunch, I was still painting with my now beautifully dilute paint - and getting increasingly concerned about what the weather was going to do.

After tidying up and having lunch (during which I managed to get more tomato soup on my painting clothes than I had paint) I decided to take advantage of the approaching storm.

I did a hand wash.
Anyone who has hand washed any amount of clothing will know that the main problem is rinsing the soap out of the cleaned items. My method of coping with this is to wash the stuff, then hang it on the line in the rain.

Yesterday, as usual, it didn't rain. But at least the paint has dried. 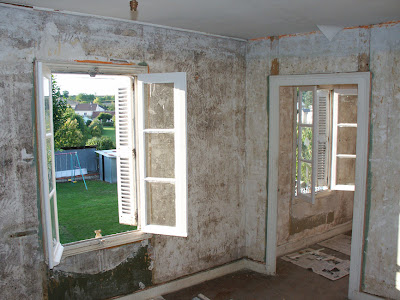 Email ThisBlogThis!Share to TwitterShare to FacebookShare to Pinterest
Labels: Our house in Preuilly, Towns and Villages near Preuilly

But the windows look great!

I think what's so frustrating now is that it finished so early and abruptly this year.