A Real Milestone for the Blog

One of the reasons we started this blog was because eventually we will live full time in Preuilly and the Blog is a way of letting people get to know us. They can see that we care about our house and its history and we care about Preuilly and life in the area.

We've been really pleased by the number of local people who at least know about the Blog and approve, and some even read it every day. We do have quite a few regular and loyal readers too, from other places in France, Britain, North America, Sweden and Australia, which is very rewarding.

Perhaps the most rewarding of all is that sometimes people contact us by email* to tell us that they spent all their childhood summer holidays in Preuilly or had their wedding reception in a nearby château or are restoring a house in the Loire Valley like us.

Recently Mike and Cally Vaile emailed us to say that they had two watercolours by an English artist called John Louis Petit (1801 - 1868). The paintings are dated 1858 and marked 'Preuilly'. They are clearly of two churches, a subject matter that Petit tended to favour. (He was an Anglican minister, but never did any parochial work. His personal income was sufficient that he employed a curate who undertook all the parish duties, and Petit spent his time travelling and painting.) 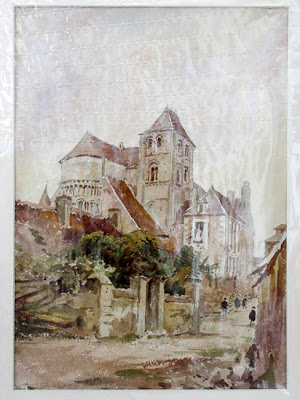 It took Mike and Cally several years to work out which 'Preuilly' the paintings depicted (there are at least five towns in France called 'Preuilly'). Twelve months ago, unbeknownst to us, they came through town on a miserable cold dull day, and easily identified the subject of one of the paintings as l'Abbaye de St Pierre, but they could not figure out the subject of the second painting. 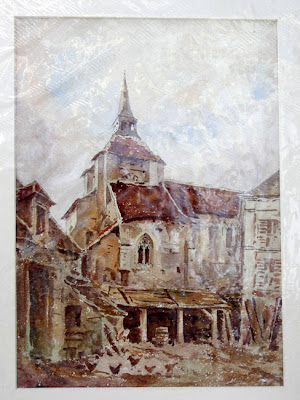 Eventually, their search lead them to our Blog. Following the initial contact, Mike sent photographs of the paintings and after an hour or so of trawling through our photographic archive, Simon spotted that the second painting was of Notre Dame des Echelles, and that we had a photo taken from virtually the same place as where Petit must have positioned himself to paint the building. (Petit always painted en plein air – and as a consequence died of a chill caught whilst out sketching – how romantic a Victorian cliche is that!) 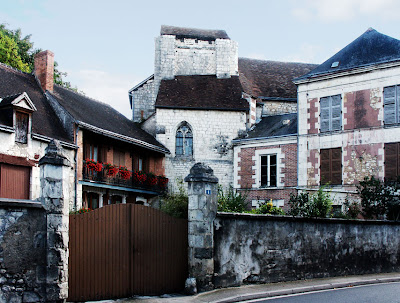 Meanwhile, I had emailed Mike's photos to Bernard de la Motte, President of the Historical/Archaeological Society of Preuilly sur Claise and he came back to us, confirming that the second watercolour was Notre Dame des Echelles. He was very excited. Both paintings show the churches before significant alterations took place in the late 19th century. 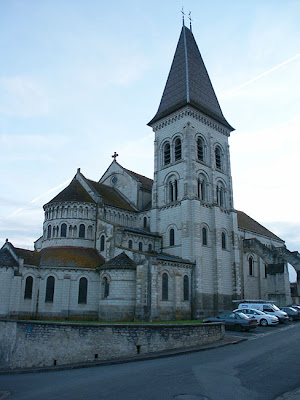 In the case of the Abbaye, the original Romanesque tower partially collapsed and was re-roofed in 1867, in the Burgundian style with a tall peaked roof of red and green tiles. It is both garishly coloured and out of proportion in comparison to the rest of the building. Even in Preuilly's official literature it is described as 'ill-advised' or 'in dubious taste'.

The alterations to the Abbaye are reasonably well documented though, so the really exciting picture is the one of Notre Dame des Echelles. Bernard does not know of any other image which shows Notre Dame des Echelles with its clocher (bell-tower) in situ (except for a general view of the town which shows it tiny and distant) and prior to Mike emailing us, Bernard was unaware of the Petit paintings' existance.

Mike and Cally let us know that they would be coming through Preuilly again in late August. They arranged to meet Simon and Bernard, with a view to bringing the paintings 'home'. They very generously offered them to Bernard at the price they had paid for them originally. (Indeed, Preuilly is not the only French town to have benefitted from the Vaile's generosity in this way. They had bought a portfolio of Petit's paintings from a dealer who had got them from the artist's family, being themselves primarily interested in the pictures of Dover Castle in Kent. There were also a number of paintings of Caen, a town in northern France that was almost obliterated in the Second World War. The Museum of Normandy was delighted to take pictures that in many cases showed buildings that no longer existed.)

Petit's paintings are very detailed, and in extremely good condition (no fading, no foxing) and, we believe, a very accurate depiction. Bernard is 'sur un nuage' (on a cloud) following his acquisition. He tells me that the bell-tower was probably added to Notre Dame des Echelles when it was restored in the 15th century. The bell itself is the oldest in Preuilly, and still exists, in a not dissimilar clocher, atop the Mairie!

Bernard, like us, is amazed at the series of coincidences that lead to the creation, rediscovery and 'return' of these paintings. He says: 'Que dire par ailleurs de ce merveilleux concours de circonstances: découvert par des amis australiens, d'un couple d'anglais ayant acquis des dessins d'un peintre anglais ayant passé deux jours à Preuilly...en 1858 par hasard! C'est une merveilleuse histoire.' He will be documenting the paintings and their significance in the next issue of the Cahiers de la Poterne, the journal of the Société Archéologique de Preuilly. 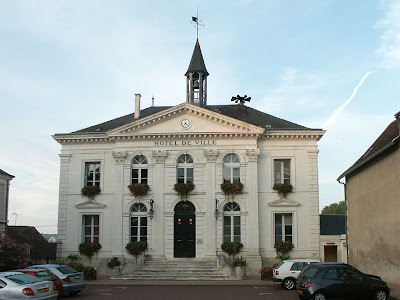 We are very proud to have played a part in this story – indeed perhaps to have made it possible at all. This is the first real tangible benefit to the community of Preuilly-sur-Claise that the Blog has produced, and that is a great feeling.

*You can email us privately by going to our profiles, where there is a link to our email address.

(The photographs of the watercolours are by Mike Vaile. Note that they are covered by a protective film.)
Posted by Susan at 10:00

An amazing story, which you you would not be able to tell if you didn;t have a blog!!!!

How brilliant that you played a part in search items of history. :-)

LOL. Good point Anne :-) We were pretty pleased with this as a 'result' for the Blog.