M. Lezeau, a 96 year old local historian wrote to us a while ago and invited us to visit him in the retirement home where he lives, so last week we popped in. He is a real sweetie and delighted to see us, but said that he could only give us 10 minutes and suggested we come back the next day.

M. Lezeau senior was a hairdresser before he retired, and the family home, on Place des Halles, is currently for sale. I had been worried about understanding what he had to say about the history of our house, but in fact, he speaks slowly and clearly, so I had very little difficulty. He had considerably more difficulty with understanding us, as he is rather deaf. When we went back to see him, his son who speaks quite good English was there too, so things progressed smoothly.

M. Lezeau junior is 'in computers' and is a very jolly sort, joking and laughing with us and his father, who he called 'papi' (pronounced 'puppy'). We all got along famously. There was quite a few (perfectly good humoured) jokes about the English coming to reclaim their land (the Loire was long under the control of the English king, not the French). M. Lezeau junior also informed us he could tell we were not Americans because we didn't exclaim 'Oh my Gahd!' at every opportunity.* Two of M. Lezeau senior's grandsons teach at English universities (in Manchester and London), and he himself is a quarter English. His mother's father was English, but she grew up in Normandy.

M. Lezeau had very generously lent us his file on the granary, and by the time we saw him the next day I had read his notes and could ask sensible questions. 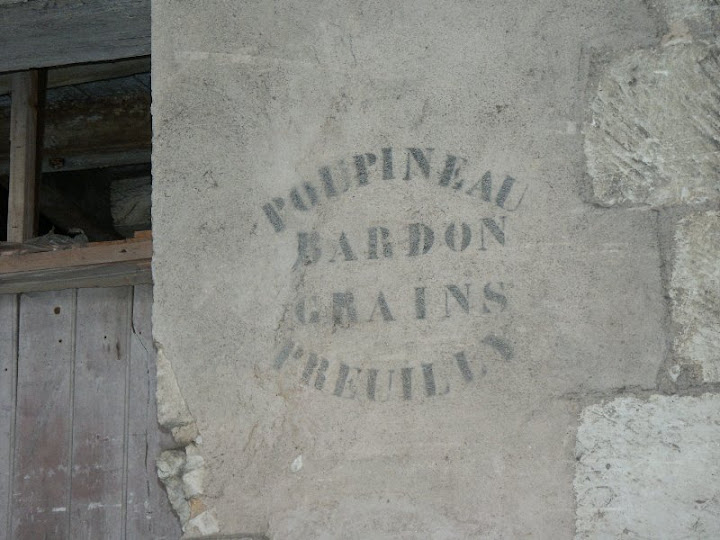 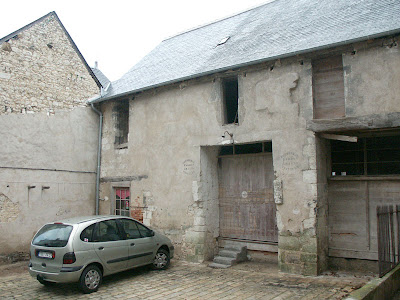 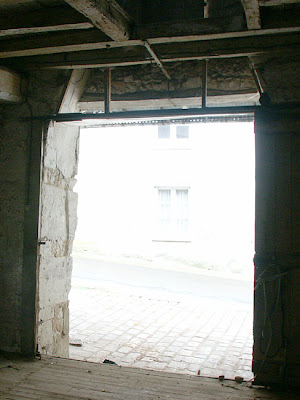 M. Lezeau says that only the middle opening at the front of the granary is original. It would have been a pointed arch, but the top of the opening has been truncated by a beam. I was quite surprised that the opening on the right is not original. M. Lezeau thinks it is an ugly opening, but actually, compared to mish-mash made of the opening on the left, it is extremely competantly done, and professionally finished. I think it must have been done a very long time ago (hundreds of years). The left hand opening is our front door and is very clearly not original. 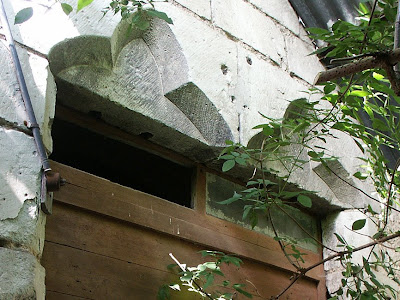 At the back, the openings are more to his taste, and he feels are not only original, but of a style quite distinctly dating the building to the 13th century. The lintels with their crisply carved trilobe pattern are apparently the only examples of this style in Preuilly. Simon is in shock at this news - he thought the possibility of living in a 16th century building was responsibility enough.

It seems that there is a possibility that the building has always been a granary. M. Lezeau thinks the circumstantial evidence points to this. There is no evidence of subdivision of the interior; the floorboards are laid above what M. Lezeau calls a 'vide sanitaire'**; and the probable date of construction coincides with a time when the local seigneur was raising money for the king by means of taxes in kind. Thus the granary could have been a sort of secular tithe barn. Its position in the town also supports this theory. The main market place is just around the corner, and our granary may have acted as a sort of ancilliary to the 'halle centrale' (central market hall), which was not just the medieval equivalent of the shopping mall, but the administrative centre and law court.

The reason the seigneur, Geoffroy III, Baron of Preuilly, was busy gathering funds for his lord was that the King, Phillipe Auguste***, was engaged in defending the lands around Lille from the encroachment of Athon of Flanders and Anjou at this time. Athon*** was a crony of Jean sans terre (i.e. John Lackland - King John of Magna Carta fame). The French King hit upon the notion of calling upon the country folk as well as the more organised and wealthier townspeople to provide a militia, appealing to their sense of national pride. For the first time, a mixed army of volunteers and conscripts, cavalry and pikemen, went into battle for France.

So, whilst what we learnt about our property is all circumstantial, we did get a very interesting French history lesson, and met several more kind, friendly and charming French people in the process. Roger Lezeau's focus was entirely on the granary, and so he could tell us nothing about the house which is attached, and which we believe to be late 16th century (possibly earlier, according to M. Galland, our roofer, who felt that the arrangement of roofing beams indicated an older and once larger building).

Roger Lezeau has subsequently written to us again, giving us a little more history to help us set the property in context, and saying that he will add a postscript to his notes to include our purchase of the building.

*Whilst I have a certain sympathy with this remark, having seen busloads of American tourists in action, I should point out that the opinions expressed by people we meet are merely reported by us and do not necessarily reflect our own opinion...blahdeblahdeblah...you've all seen the riders at the bottom of emails...We have many fine American friends who seem to be able to get through entire weeks at a time without resorting to this particular exclamation, but if any of them are seriously offended, I hereby grant permission for them to refer to me, one time only, as an Antipoedean, which is an expression I particularly dislike.

**An architect friend who visited shortly after we had seen M. Lezeau said that the 'vide sanitaire' made sense, as it is a void under the building that ensures good air circulation. Above all, grain must be kept dry, and the 'vide sanitaire' (literally, sanitary empty space) is presumably a means of keeping the rising damp out of a stone building constructed before the advent of damp-proof courses.

***Wikipedia is reasonably informative about this period. Philippe Auguste is Philippe II of France, Athon must be Otton of Brunswick. Please don't take the history I have outlined above as definitive - I am merely repeating what I gleaned from Roger Lezeau's 'history lesson'. I may well have misunderstood or confused facts and episodes.
Posted by Susan at 10:00

OMG, as we say. And damn and blahst! You've pegged us Yanks.

Shouldn't that be 'dang blast it' or something? :-)

The qualities supplied by the vide sanitaire would also apply to a hospital, wouldn't it...
and I'm with Simon....
the more we [mainly Pauline] find out about this place....
the more I think...
should we alter this or that...
or cover that or this up....
but, how much has been altered anyway... your missing mullions for a start.

And what have you got against Podeans?
Tim